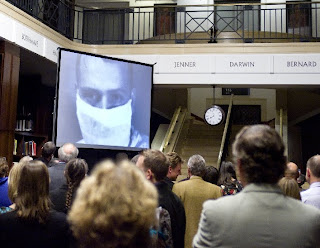 Readers of this blog, subscribers to our Wellcome Film YouTube channel, and those who regularly use our film collection will know that digital video has been available online for several months now, with more titles added on a regular basis as the Wellcome Film project moves forward. This week we took a moment to celebrate 2 years of work on this project by holding an official Launch party at the Wellcome Library on 2 November 2009. The official press release is on the Wellcome Trust website.

Around 90 people attended, with a champagne reception to kick off. Richard Aspin, Head of Research and Scholarship at the Wellcome Library, introduced the project and the collection, saying that “Wellcome Film is the one of the most important digitisation project to date in our ambition to transform the user experience of The Wellcome Library.”

Following Richard, our keynote speaker Jordan Baseman talked about his film project Nature’s Great Experiment, a thought-provoking documentary on behaviour and genetics of twins. The film explores themes researched by Professor Terrie Moffitt and the Twin Studies Research Team at the Institute of Psychiatry, King’s College London. Jordan’s project was partly funded by the Wellcome Trust. Jordan discussed one particular film that he discovered in the Library’s Moving Image and Sound Collection, The Management of Twins in Pregnancy and Labour (1958), produced by the Wellcome Trust and filmed at University College Hospital, London. The film proved to be a catalyst for his project, providing much-needed inspiration to bring his ideas together. Before showing a short clip from his project, Jordan described the 1958 film during his speech as

“…an extraordinary document that at its heart focuses on the delivery of two sets of twins. It is a stunningly beautiful, profound and slightly disturbing document. It is disturbing because of the passivity of the mothers, but also because of the location and presence of the camera. The camera is not passive. It is an active instrument that records these momentous events from a privileged vantage point. The twins are literally delivered to camera: displayed for us to see.”

Angela Saward, Curator of the Moving Images and Sound Collection at the Library, rounded off the evening by thanking the long list of people and organisations involved in the project – in particular the Project Advisory Board, JISC Collections who part funded this project, and Lucy Smee, who spent 17 months cataloguing, quality checking, and segmenting almost every single title. Angela then showed a film trailer created for the project by JCA tv, the facilities house that provided telecine, video recording, encoding and transcription services (see below).