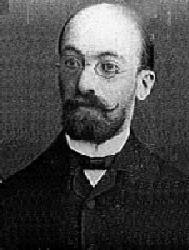 To the majority of this blog’s readers, the heading to this post will be opaque. If history had worked out differently, however, the phrase could have been as well known as “Happy Birthday”; for this is what it means. Many people may find something familiar about it but be unable to place the language. It is, in fact, Esperanto – the most widely used of the various artificial international languages to be constructed – and today, December 15th 2009, is the 150th birthday of Ludovic Lazarus Zamenhof, the language’s inventor.

Zamenhof was born in Białystock, Poland, and grew up in a multilingual environment: Russian, or rather the variant of it now distinguished as Belarussian, was his first language, but he also used Polish and Yiddish within his family and learned German, English, Latin, Greek, French, Hebrew… the list goes on. (Even his name is subject to translation issues: he is alternatively known as Eliezer Levi Samenhof.) Growing up surrounded by different, sometimes quarrelling nationalities, Zamenhof set out to devise a neutral means of communication that would, he hoped, foster perfect understanding between communities and reduce conflicts accordingly. In 1887, whilst he was practising as an ophthalmologist, he published Lingvo internacia. Antaŭparolo kaj plena lernolibro (International Language. Foreword And Complete Textbook), using as his pseudonym “Doktoro Esperanto,” or “Doctor Hopeful”. The language attracted considerable attention over the next decades, the first international congress of Esperantists being held in 1905, and in 1910 Zamenhof was nominated for the Nobel Peace Prize.

As a medical man in his day job, Zamenhof himself obviously falls within the Wellcome Library’s interests and the library catalogue reveals biographical and historical studies of the man and his work. More surprising, perhaps, are the other ways in which Esperanto occurs in our holdings. For those in search of a more challenging, less anodyne Esperanto vocabulary than one gets from the header to this article, there is a leaflet on birth control in the language, within the papers of the Family Planning Association. The association with birth control continues in a publication to be found in the papers of the family planning pioneer Eileen Palmer: C V Drysdale’s Diagrams of International Vital Statistics with description in English and Esperanto, together with a Table of Correlation Coefficients between Birth and Death-Rates (1912). The association of the new language with early twentieth-century advanced thought is obvious. It was not merely the preserve of idealists, however: hard-headed businessmen were also looking at it. Within the Wellcome Foundation’s own archive is a file that indicates Wellcome’s drugs company was, in 1909, working out the legal frameworks that would govern the use of Wellcome trademarks in Esperanto.

Sadly, as we know, Esperanto did not end conflict between nations and it was in the middle of the greatest conflict the world had yet known that Zamenhof died, in 1917. His language lives on to this day: until recently, classes were hosted some fifty yards from the Wellcome Library. Within the Library, traces of his great project occur in many different areas of our holdings. Other, earlier schemes to break down barriers to communication, such as John Wilkins’ seventeenth century universal language, are also documented. Readers are invited to pick over these heroic failures and muse on how different the world might have been. Bonŝancon!1