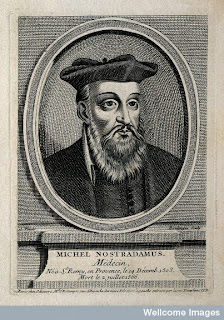 The date is disputed – some sources say it’s the 21st December – but other evidence points to the fact that today in 1503, Michel de Nostradame (or Nostradamus, to give the familiar Latinised version of his name) was born in Saint-Remy-de-Provence in France.

Although remembered now for his prophecies, Nostradamus found early renown through his work as an apothecary, and indeed, for his remedies to ward off the plague. It wasn’t until the 1550s, when settled in Salon-de-Provence, that Nostradamus began publishing the predictions by which he is still remembered.

The Wellcome Library holds a number of works relating to Nostradamus, including early editions of his Les Propheties (The Prophecies) and also a number of engravings and paintings (such as the example shown above).

One Response to Nostradamus