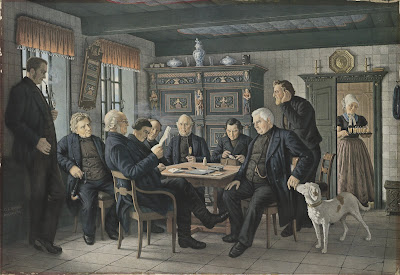 This painting of a parish council meeting is a remarkable document, and perhaps not as well known as it deserves to be (click on the image to see the picture in all its amazing detail). That may be due partly to the fact that the original painting is apparently still in private hands, not in a public gallery, and partly to the outlying place from which it comes. It is the work of Carl Ludwig Jessen (1833-1917), also called Jessen-Deetzbüll after his birthplace. He lived in North Friesland, the north-western region of Schleswig-Holstein, which at the time of his birth was in Denmark but in his lifetime passed to Germany.

Jessen was essentially self-taught, though after he had already started on a career as a painter he studied at the Copenhagen Academy and later won a scholarship to study in Paris and Rome. His early self-portrait in the Kunsthalle at Kiel, painted nearly fifty years before the parish council painting, included an écorché to emphasize his academic credentials, but his real forte in later years was in painting scenes from his homeland.

Paintings like the one of the parish meeting were created with the aid of innumerable record-drawings of characteristic North-Frisian costumes, furniture, house-construction, and utensils, and with the aid of an imagination powerful enough to hold in the painter’s mind the unified scene of the actors immersed in their business. 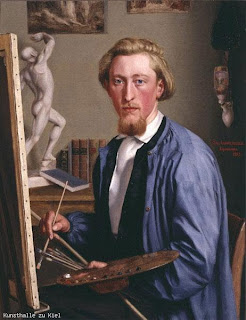 Such questions as whether to grant parish funds to help a needy applicant, where to construct roads, fences or hedges, how to deal with epidemics and nuisances, how much to pay the parish constable, and how to deal with requests from county or state government, needed, and in many places still need, a decision of the parish, commune or Gemeinde. Jessen presents this almost timeless process with a clarity and precision that transport the viewer straight into the meeting-room. [1]

In Jessen’s portrayal, dated 1905, four of the nine councillors have tobacco pipes: we see the beginnings of a smoke-filled room. The chairman reads out a letter, and each of the councillors behaves in a different way. One who is hard of hearing strains to catch his words. Some look and listen while others concentrate by listening without looking. Some are more phlegmatic than others, and one of them is vaguely conscious that his dog is getting bored. On the right, the only woman present brings in the refreshments.

The image shown here is a large four-colour print of the painting, published in Berlin probably not long after the picture was painted. Small wonder that framed copies of this print occupy an honoured place on the walls of countless North-Frisian houses. [2]

The recent load added images to 991 catalogue records for pictures and 167 records for printed books and printed broadsides. The picture-records include 510 AIDS posters, for which copyright permission has kindly been given by designers, charities and public bodies. Some of the latter may even have had to put it on the agenda of their meetings – though these days not in smoke-filled rooms.