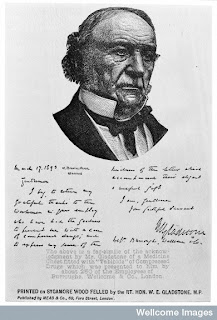 By any measure, William Ewart Gladstone was one of the major figures of the Victorian age. Born on this day 200 years ago, he served as Prime Minister during four separate terms of office, and was as fascinating and controversial a figure as any of his predecessors or successors.

To mark the anniversary of his birth, the image shown is of a print from the Library’s collections which links Gladstone to Henry Wellcome. It’s a facsimile of a letter of thanks, sent by Gladstone to Burroughs Wellcome & Co in 1893, on receipt of one of the company’s famous medicine chests.

Burroughs Wellcome & Co realised the importance of having their products associated with the great and the good. In this instance, their products are endorsed by the Prime Minister of the day. The company’s medicine chests were also given to at least one US President (Teddy Roosevelt) and two British monarchs (Edward VII and George V): it all aided the image of Burroughs Wellcome & Co as a company of respectability and distinction.

But even in Gladstone’s eighty-fourth year, this letter offers signs of his famous endurance, printed as it is, on sycamore wood “felled by Mr Gladstone”. An advertisement then, not just for the establisment virtues of Burroughs Wellcome & Co, but for the health and fitness of the “Grand Old Man” as well.

3 comments on The Grand Old Man