Free at last! Wellcome Library Items of the month, January 2010

“Wine of the Incas. … Coca of Peru. For convalescents.”
Lithograph after A.M. Mucha. Wellcome Library no. 658317i.

As fireworks, church-bells and champagne corks sounded the passage of 2009 into 2010, library users were receiving a benefit that was in most cases far from their thoughts. Under UK law, the copyrights of authors – including writers, artists and film directors – last until the seventieth year after their deaths, and then expire on the stroke of midnight on 31 December. Therefore, other things being equal, the copyrights of those who died in 1939 terminated at midnight on 31 December 2009, irrespective of the dates at which their individual works were published. At last the literary, artistic and dramatic works of these authors have entered into the “public domain” in the UK and can now be freely reproduced without let or hindrance on grounds of copyright protection. That includes reproducing them on the web and as digital images in the Wellcome Library catalogue. So what have we gained? Here are three examples from the Wellcome Library.

The works of the Czech designer Alfons Maria Mucha (1860-1939) became familiar to many in the 1970s from the widespread reproductions of his Art Nouveau-style posters. At that time the poster publishers were (or at least should have been) seeking permission from, and paying fees to, the Mucha estate (now the Mucha Trust). Such permission is no longer needed.

An example of a work by Mucha which can now be freely reproduced is the print above advertising coca wine. The subject is purportedly a goddess of the Inca people refusing coca to the indigenous people of Peru in order to reserve it for the European consumers of coca wine (i.e. the viewers of Mucha’s print). Present-day viewers may be embarrassed at being invited to endorse a message which is today represented as the robbing of indigenous peoples of their rights to their native flora and fauna by enterprising European and American imperialists. Political issues apart, the print contains much foliate decoration in Art Nouveau style, including coca leaves in the goddess’s ear-rings.

Another work by Mucha in the Wellcome Library is this poster of Sarah Bernhardt, the popular tragedienne. She was important in Mucha’s career, for it was his portrayal of her in the role of Gismonda, in a play by Victorien Sardou, that launched his career as a poster artist. The Wellcome poster of La Bernhardt shows her in another play by Sardou, this time in the role of Tosca – the play on which the now well-known opera by Puccini was based. It was this role that caused Bernhardt to lose a leg and to perform thereafter with one leg. In the final act Tosca jumps off the parapet of the Castel Sant’ Angelo in Rome: in 1905, while simulating Tosca’s death-leap in Rio de Janeiro, Bernhardt injured her right knee. As a result of complications, in 1915 the whole right leg was amputated.

Less well-known than Mucha is Robert Bryden (1865-1939). In 1899, as part of the retrospect that accompanies the last year of any century, he published a series of portraits entitled Some wood cuts of men of letters of the 19th century (London: J.M. Dent, 1899). Two of the woodcuts in the Wellcome Library are shown here. 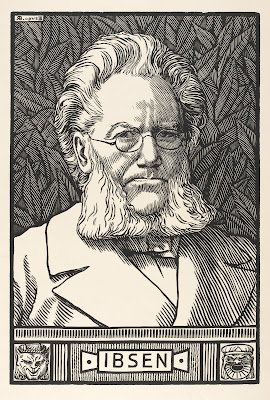 One (right) is of Hendrik Ibsen (1828-1906), the Norwegian pharmacy assistant who became world-famous as a playwright for introducing into the theatre depressing themes from modern life such as syphilis (in A doll’s house, 1879, and Ghosts, 1881) and pollution of the urban water supply (in An enemy of the people, 1882). 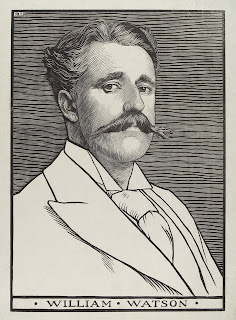 The other shows William (later Sir William) Watson (1858-1935), a prolific poet and opponent of esoteric obscurantism in the Modern Movement. The Oxford dictionary of national biography states that “Watson chose the sonnet as a means of upbraiding Britain for its unjust actions in the Sudan and for its weak, indecisive response to Russia’s hostile moves in Afghanistan”. Watson was knighted in 1917 after publishing poems praising Lloyd George’s conduct of the Great War. [1]

Who owned Bryden’s copyrights before they expired is not at all obvious. Without such knowledge, his striking portraits were effectively “orphan works“, a status which tends to deter reproduction and dissemination. Others in the series include the writers Leo Tolstoy, Walt Whitman, and John Ruskin – celebrities for whose portraits there is a demand. Now that Bryden’s copyrights have expired, we can expect to see his work reproduced more frequently. For one thing, Google Books can now digitise the Dent edition without running into the problems which they have been encountering recently as a result of their contempt for authors’ copyrights. [2]

Finally, an artist who is far from obscure: Louis Wain (1860-1939), cat-lover, painter of cats, and an exact contemporary of Mucha. 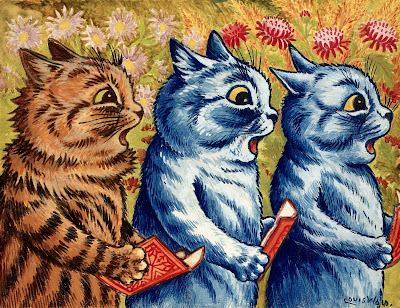 Gouache by Louis Wain. Wellcome Library no. 29844i

Wain was one of the best known artists of Edwardian England, and had he appointed an agency to manage his copyrights it could have gathered enough funds over the last seventy years to endow a substantial cats’ home. 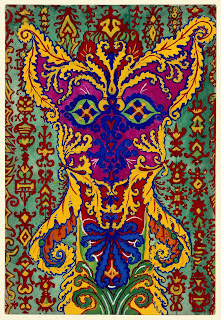 However, when Wain died in 1939 he had spent years in psychiatric hospitals and seems not have had any heirs: as a result his works have been widely reproduced in books, magazine articles, and humorous prints, without reference to any claimant to the copyrights, and without payment. Now at last they can be reproduced legally. On the right is one of the cat-portraits which he executed in hospital: he has labelled it “Early Greek”, presumably meaning that the grotesque style of ornament and lurid colours represented Wain’s perception of the Minoan and Mycenaean wall paintings that were being published by Sir Arthur Evans and others from 1910 to the 1930s.

Left: Gouache by Louis Wain. Wellcome Library no. 38888i

These three artists were born within five years of each other, and despite their different lives, there seems to be a certain similarity between their works. They are very particular about filling the sheet. Mucha eliminated voids with Art Nouveau arabesques, or in the coca print “peruesques”; Bryden in his hieratic portraits reversed the usual custom by filling his backgrounds with black lines and foregrounding conspicuous swathes of white; while Wain demonstrates the obsessive style of insane artists who do not wish to leave a single part of the sheet left over (compare works by the Swiss psychotic Adolf Wölfli (1864-1930) or Richard Dadd’s “Fairy feller’s masterstroke“). Anything to do with the influx into Europe of Japanese prints? Their commonality is only observable because of the historical distance that we have now gained from them, though this argument has its limitations: can we also observe such a commmonality between Sigmund Freud (1856-1939) and William Butler Yeats (1865-1939), whose copyrights have also expired this year? At all events we should now be able to study the works of all of them much more easily now that they are copyright-free.

Caveat: Authors and publishers have other rights apart from copyrights. The author of this article is not a lawyer and nothing in it constitutes legal advice.

One Response to Free at last! Wellcome Library Items of the month, January 2010