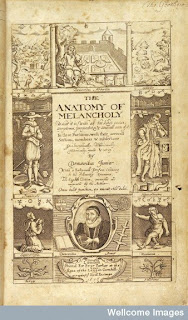 As the Monday that begins the last full week in January, today has been accredited as “the most depressing day of the year”. If this is the case, this year, so called ‘Blue Monday’ falls upon a rather fitting anniversary, as on the 25th January 1640, Robert Burton, author of The Anatomy of Melancholy died.

A lifelong sufferer from depression, Burton’s work can be seen as an attempt to write himself out of illness. But this is not merely a first-person account of sickness: Burton’s Anatomy attempts to include every conceivable account of melancholy that was available to him. However, this is just the starting point: as from melancholy, Burton examines almost every topic imaginable: the Anatomy then, becoming an enormous compendium of medicine, philosophy, wit and legend – arguably a summation of human learning up to that date.

From its first publication in 1621, Burton expanded the Anatomy through five further editions before a posthumous edition came off the presses in 1652. Its influence on the next century of English Literature is clear and its properties were hailed by Samuel Johnson, who said reading the Anatomy provided solace during the darker moments of his own depression. 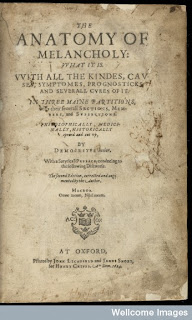 The Wellcome Library holds a number of copies of the Anatomy (including a first edition and three others copies published in the 17th Century) as well as secondary works discussing the context and importance of the book. Shown is the copy from our collections which was once owned by John Webster (1610-1682), the seventeenth century clergyman and physician.

Wellcome Library readers can also access different editions of the Anatomy through Early English Books Online (EEBO), a remote access resource freely available to Library readers. Ideal reading material for ‘Blue Monday’ and – for some modern critics – every other day of the year.