Samuel Pepys and his “old pain”

On a day when new diaries are opened and entries for the year ahead begun, it’s fitting to post about one of the most famous diarists of all time.

Samuel Pepys’s diary is popularly remembered for its clear evocations of the major events of the 1660s: of the Great Plague of 1665, the Great Fire of London in 1666 and the Dutch attack on the Medway in 1667. But Pepys was as much a diarist of the everyday and the personal, and it’s his self-examination that is – for the seventeenth century – so radical and new. And its there from the first entry in his diary, entered for 350 years ago today, the 1st January 1660. It begins:

“Blessed be God, at the end of the last year I was in very good health, without any sense of my old pain, but upon taking of cold”. 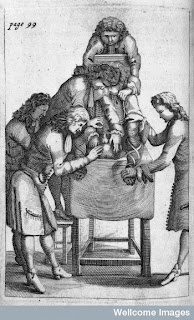 This “old pain” was caused by stones in Pepys’s urinary tract, and had been inducing great pain from an early age. In 1657, Pepys took the hazardous decision to undertake surgery: on 26 March 1658, he was operated on by Thomas Hollier of St Thomas’s and St Bart’s. It was a success and for several years afterwards, Pepys marked the event with an anniversary dinner (which, of course, he recorded in his diary). Pepys even preserved the removed stone – which was over 2 inches in diameter – in a specially constructed case.

This engraving, from A treatise of lithotomy: or, of the extraction of the stone out of the bladder (1683), shows a patient in preparation for a similar operation.

Pepys’s diary then, begins with allusions to his health, and it appears his wellbeing was behind his decision to stop writing the diary in 1669, when Pepys believed his eyesight was failing (although troubling him to his death in 1703, his eyesight did not greatly decline after he stopped writing the diary).

Pepys’s diary was written in shorthand and was – like many diaries – a personal record, its existence being unknown to those closest to him. However, given that the six volumes of his diary were catalogued in his library with all of his other books, this suggests that Pepys knew that his diary would be discovered by future generations. And, the diary is very easy to discover (and to search, and even to annotate) through an interactive online version (by which you can even follow Samuel Pepys on Twitter). Pepys and his diary is also the inspiration for one of the rooms in the latest Wellcome Collection exhibition, Identity: Eight Rooms, Nine Lives.

350 years after it was begun, Pepys’s diary still holds the attention of modern readers, offering not only eye-witness accounts of some of the most famous events in British history but also showing Pepys’s ability – to quote his most recent biographer – to “look at himself with as much curiosity as he looked at the exterior world, weighing himself and the world equally in the balance”. [1]

We are forever grateful that Pepys examined his life in such detail, and that he saw fit for his diary to survive. But if it wasn’t for the actions of Thomas Hollier in 1658 in reducing Pepys’s “old pain”, we do wonder if Pepys’s diary would ever have been written at all.

One Response to Samuel Pepys and his “old pain”