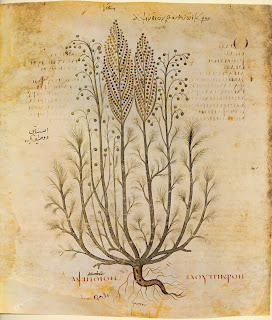 The De Materia Medica of Dioscorides, written around 70 A.D., was the most important source of information on medicinal plants for 1500 years and today remains an important text in this field. The oldest known complete manuscript is the Juliana Anicia Codex (ca. 512 A.D.), housed in the Austrian National Library in Vienna. Listed as Codex Vindobonensis Medicus Graecus 1., it is better known as the Vienna Dioscorides, the oldest and most valuable work in the history of botany and pharmacology.

New plant discoveries in the 16th century led to a reappraisal of Dioscorides. The most important were the commentaries of Pietro Andreas Mattioli, a doctor and naturalist born in Siena in 1501. Pietro became so obsessed with Dioscorides that with each new edition his commentaries grew ever longer. He established an international reputation and was appointed personal physician to the Hapsburg Emperor Ferdinand I. In Prague he met Ogier Ghiselin de Busbecq who served as the Emperor’s ambassador to Constantinople from 1555 to 1562. Busbecq told him of the magnificent manuscript of Dioscorides he had seen at the Ottoman court, which he was later able to acquire for Ferdinand. 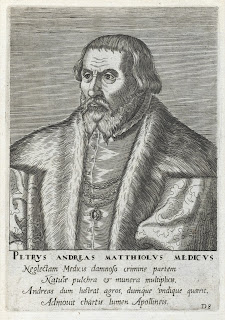 With the support of the Hapsburg princes Mattioli planned a new edition of Dioscorides on a grand scale. He employed two artists, Giorgio Liberale de Udine and Wolfgang Meyerpeck to design and illustrate over 600 wood blocks. These wood blocks were used to print translations in Czech and German in Prague in 1562 and 1563, then a Latin edition in Venice in 1565 and Italian in 1568.

The use of wood blocks to print illustrations was the most common technique in the 16th century. In the second half of the century publishers began to use engraved copper plates. This method could provide much finer detail and accuracy, but was more expensive as the plates had to be printed separately on a rolling press. Most wood blocks and copper plates from this time were used many times until they wore out, and sometimes recycled to create new images. However a few have survived. The most important collection is held at the Plantin-Moretus Museum in Antwerp.

The Mattioli wood blocks were rediscovered in Venice by the French botanist Henri Louis Duhamel du Monceau in the 18th century. He used some of them in his work Traité des Arbres et arbustes (Paris, 1755) and these were lost. However many remained in his family until the 20th century when they began to appear on the market. In 1989 110 blocks were offered for sale in a special catalogue from three bookdealers – Bernard Quaritch, Hazlitt, Gooden & Fox and Antiquariat Junk. In December 2009 the Wellcome Library purchased one of these blocks from W.P. Watson (previously of Quaritch). It is probably pearwood and measures about 22 cm by 15 cm. On the back of the block is a paper label “Ambrosia”. 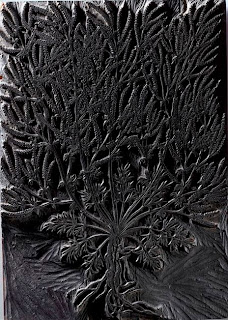 A modern English translation of De Materia Medica identifies Ambrosia as Artemisia Maritima, or Sea Wormwood. Artemisia is a large, diverse genus of plants with between 200 to 400 species belonging to the daisy family Asteraceae. They grow in temperate climates of the Northern Hemisphere and Southern Hemisphere, usually in dry or semi-dry habitats. Wormwood has been used medicinally as a tonic, stomachic, febrifuge and anthelmintic. 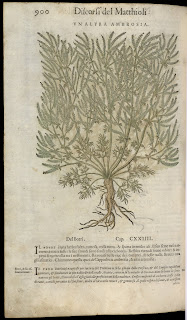 Artemisia Maritima (Sea Wormwood) has an extremely wide distribution in the northern hemisphere, occurring mostly in saltish soils and is found in the salt marshes of the British Isles, on the coasts of the Baltic, of France and the Mediterranean. It has similar properties to other wormwoods, but is less powerful. It was used as a replacement for “true” wormwood in remedies, as it was more readily available and often used in treatment of intermittent fevers. The most effective anti malarial drug is artemisinin, derived from Artemisia annua, also known as sweet wormwood, which had been used in Chinese medicine for centuries under the name ‘Qinghaosu’. It was rediscovered in the 1970s, evaluated first in South-east Asia, and eventually accepted as an essential component of anti malarial treatment in the past few years.

Mattioli’s herbal : a short account of its illustrations, with a print from an original woodblock (Morgan Library, New York)

Hand coloured copy of 1568 Italian edition in the Wellcome Library