Behold the man: a painting in Perth 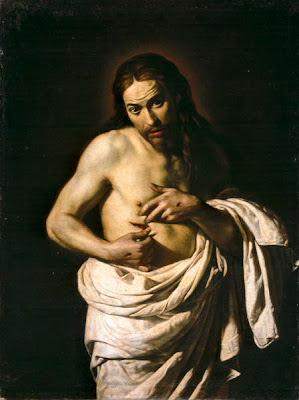 This painting of Christ showing to the viewer the wound in his side has belonged to the town of Perth, Scotland, since around 1862, when it was presented by a local resident, Colonel William Macdonald Farquharson Colquhoun Macdonald (1822-1893). Until recently it was hardly known to anyone, but in November 2007 it became available on the web in the British online database National Inventory of Continental European Paintings, in which it appears with a catalogue record by Dr Claudia Heide. (A small selection of the Wellcome Library‘s more problematic oil paintings–164 items–are also included in the same database.)

However, though databases may be accessed on the Internet through what is called a “browser” (such as Internet Explorer, Netscape or Firefox), they, unlike ordinary web-pages, do not usually expose their contents for browsing, and the painting did not come to wide public attention until it was published in the pages of a journal in October 2009, when it was the subject of a thorough and expert study by John Gash of the University of Aberdeen [1]. Such an exceptional painting raises several inter-related questions about its authorship, iconography, and function, which are discussed in Mr Gash’s article.

First, who painted it? It is a Caravaggesque painting, and although there are features that suggest an attribution to the artist called Caravaggio (Michelangelo Merisi, il Caravaggio, 1571-1610), the odds are that the painting is “a stupendous act of homage by an early follower” of Caravaggio. Gash mentions as the possible author of the painting no fewer than eight such followers, all of them well known to students of the international Caravaggesque movement, and all of whom worked in Rome at some time: Bartolomeo Manfredi, a master of half-length compositions; the elusive Giovanni Antonio Galli, il Spadarino; G.B. Caracciolo, il Battistello, of Naples; Valentin de Boulogne; Gérard Douffet from Liège; the Venetian Carlo Saraceni; Antiveduto Gramatica from Siena; and Alessandro Turchi from Verona. Unable to fix on a definitive attribution, especially in the painting’s uncleaned state, Gash concludes by designating the author as The Perth Master. One of the small unusual features that might prove to be a clincher of the attribution is the fact that the outer contour of Christ’s halo follows the irregular contour of his hair, instead of being a perfect circle.

Works showing this subject tend to be mediaeval rather than early modern: the closest parallel cited by Gash is a Florentine sculpture (left) from the early 15th century, which happens to be prominently displayed in the Medieval and Renaissance Galleries at the Victoria and Albert Museum–the new galleries which opened on 2 December 2009 (below right). [3] It is displayed rather high on the wall in the V&A because it is thought to have been placed originally above the cloister doorway in the hospital of Santa Maria Nuova in Florence. [4]

This provides Gash with a clue to the function of the painting: 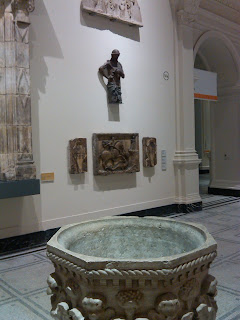 “Sculptures and paintings of this subject were traditionally located in hospitals, as reminders of Christ’s compassion for, and identification with, sick and suffering humanity, and it may be that the sculptural qualities of the Perth painting reflect that tradition and were devised for such a location.” Paintings for such a setting are documented as having been painted by Caravaggio himself. During his time in Rome, one of his patrons was the prior of the hospital of Santa Maria della Consolazione: as Gash remarks, “none of these pictures has ever been identified, and the subject of the Perth canvas would make it an ideal contender”.

However, Caravaggio was not the only painter to receive such commissions. Another of the candidates, Bartolomeo Manfredi, was patronised by Pope Paul V’s physician, the connoisseur and critic Giulio Mancini, who had links with the two Roman hospitals Santa Maria della Consolazione and Santa Maria della Scala. Manfredi also made paintings for the rector of the Hospital of Santa Maria Della Scala in Siena. Another Caravaggesque painter, the Fleming Louis Finson, painted an allegory of the four humours and other subjects for the hospital of the Jesuits at Sant’Andrea della Valle in Rome before 1612. [5]

The Perth painting gains in force if we imagine that we are not just doubting St Thomases to be won over intellectually to the possibility of resurrection, we are also vulnerable, ailing hospital patients with painful ulcers, bubos, and aposthumes, to be comforted by this vision of Christ appearing, as if in living reality, before us, and demonstrating his own trauma. Christ tilts his head, raises his eyebrows and furrows his forehead in a combined questioning, pained and resigned expression in response to our presence before him: “What do you expect? I went through this—-you can endure it too”. The contour of the halo also emphasizes his physical humanity.

So—a remarkable discovery, obscure even in Perth, even more so elsewhere until now, and one which enlarges our insight into the minds and sufferings of early modern people.

[3] Anna Somers Cocks, ‘How the Victoria and Albert Museum dealt with the dying of Christianity: the redisplay of the museum’s Medieval and Renaissance Galleries’ The art newspaper, December 2009, http://tinyurl.com/yzjfawm

[4] “Tentatively identified as the figure of Christ once situated over the now-destroyed small doorway leading into the Chiostro delle Ossa, next to the church of Sant’Egidio within the hospital of Santa Maria Nuova in Florence. Christ’s wounds were a focus for devotion. His side wound was especially venerated, and in prayers it was evoked as a refuge for sinners. No. A43-1937 artist unidentified” (V&A exhibition label)