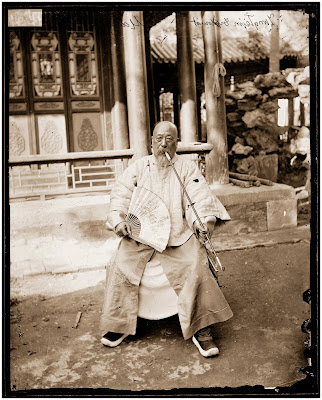 One of the treasures acquired by Henry S. Wellcome and now in the Wellcome Library is a collection of 688 glass negatives by the Victorian traveller John Thomson (1837-1921). They record Thomson’s travels in China, Indo-China and Cyprus in the 1860s and 1870s, and are notable for several reasons: the portraits are insightful, the landscapes majestic, the subjects well-documented by Thomson himself, and the compositions were for the most part unpublished in the photographer’s lifetime. Recent developments in digital scanning and storage have enabled the Wellcome Library to scan them at high resolution and to have the digital scans printed to a size and quality that in some cases allows us to see more in the photographs than the photographer himself could ever have seen through the lens of his wooden box camera. Click on the portrait of Dong Xun above and you should be able to see clearly the flowers painted on his fan.

About 150 selected photographs were exhibited as large framed prints in China in 2009, and received a warm reception in the four venues to which they toured: Beijing (Beijing World Art Museum), Fuzhou (Fujian Museum), Guangzhou (Guangzhou Museum), and Dongguan (Dongguan Exhibition Centre). The exhibition was visited in China by no fewer than 153,491 visitors, including over 9,000 schoolchildren. English-language comments in the visitors books include:

“Many congratulations on a wonderful exhibition of huge historical, educational and cultural value“–H.E. Sir William Ehrman, British Ambassador in Beijing
“Photos are excellent, and no other words to say – only awesome and so stunning. What an interesting collection“–visitor from Indonesia
“A remarkable and brilliant exhibition. Superb images by Thomson, fine reproductions and excellent content.”–visitor from Hong Kong
“A lot of beautiful memories! Bring us back to history, every moment is a wonderful moment! Great show“–visitor from Hong Kong
“One of the best displayed photographic exhibition I have seen. Congratulations to everyone involved.”–visitor from Northern Ireland
“Inspiring and meaningful exhibition, actually unbelievable – beautifully presented.”–visitor from Beijing

Now Europeans have a chance to see the exhibition, as it has opened in its first venue outside China, at the Merseyside Maritime Museum in Liverpool. The exhibition opened on 4 February 2010, in the presence of the Lord Lieutenant of Merseyside (Dame Lorna Muirhead, past President of the Royal College of Midwives), the Consul-General of the People’s Republic of China in Manchester (Mr Jian Ni), and a crowd of interested Liverpudlians and visitors. The organizer of the exhibition Betty Yao, speaking in Chinese and English, explained the series of chances and coincidences which led to the survival of the negatives and ultimately the present exhibition, which was then viewed by an enthusiastic audience. 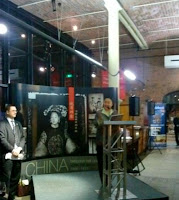 Left: Betty Yao at the opening of the exhibition in Liverpool. On the far left is Dr David Fleming, Director of the National Museums of Liverpool.

Remarkably, this is the first exhibition in England devoted to John Thomson’s photographs of China. In Liverpool it is complemented by the museum’s own Chinese and European paintings of sea-travel in the nineteenth century.

A contemporary photographer in Liverpool, Pete Carr, was quick off the mark in providing his comment on some striking aspects of the exhibition: see this blog posting. 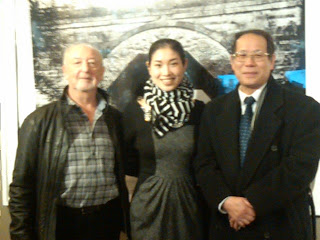 Anyone who has not visited Liverpool at all, or not for some time, will find much of interest. The Merseyside Maritime Museum is housed in a vast renovated Victorian warehouse on the old dockside: the original vaulted brickwork ceilings have been retained in the galleries. Adjacent are Tate Liverpool and the new building of the Museum of Liverpool (already spectacular while still under construction). The city has benefited from Liverpool’s year as European Capital of Culture in 2008, which enabled the waterfront to be linked to the city centre by new public transport. Like Shanghai, with which Liverpool is twinned, Liverpool has a wealth of fine buildings in Classical, Gothic and Modern styles. There are stylish new restaurants and hotels, a monumental stone stairway is being built at the entrance to Lime Street Station, and inside the station there is a new bronze sculpture of a “Chance Encounter” between two of Liverpool’s most famous citizens. In short there is a buzz about the city. The John Thomson exhibition will be on show at the Merseyside Maritime Museum until 6 June 2010. 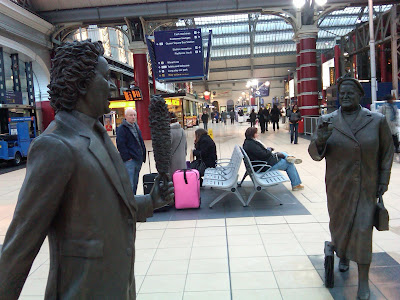