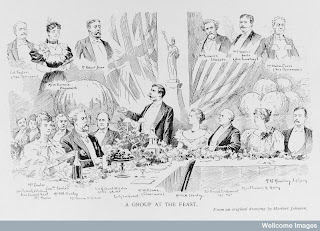 A scene from late-Victorian London society is captured here, in this illustration from the Wellcome Library: we’re at a Thanksgiving Day banquet in 1896. The great and the good of the American expatriate community are on show and presiding is Henry Wellcome – the then President of the American Society.

This one image perhaps captures Wellcome the socialite: since coming to London in 1880 to co-found the pharmaceutical company Burroughs Wellcome & Co, he had steadily made a name for himself on the London social scene. Wellcome formed relationships and connections with a number of other Americans during this period – two of them, the explorers Henry Stanley and Mounteney Jephson are pictured here – but the one we want to focus on is Anglo-American industrialist, Hiram S Maxim (clear identifiable by his beard and shock of white hair), who was born on this day 170 years ago.

Like Wellcome, Maxim was born in the United States and moved England to further his career. Both men became members of the British establishment, and received knighthoods and both owned large-scale factories which mass-produced the products most commonly associated with them. Indeed, these factories were geographically close together – Maxim’s in Crayford, Wellcome’s in Dartford. But whereas the Dartford factory of Burroughs Wellcome & Co, produced precise, compressed drugs, amongst the armaments coming off the production line of Vickers Son & Maxim at Crayford was the first self-powered machine gun, which had been patented by Maxim in 1883. 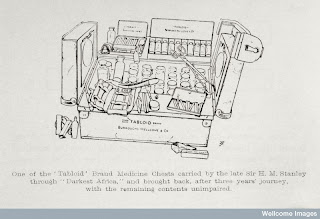 And the connections between Maxim and Wellcome now start to widen: from the banquet above to neighbouring factories on the edge of London, we move to Africa. In 1886, a British-led expedition was launched to relieve the Governor of the state of Equatoria from advancing Mahdist forces. The so-called Emin Pasha Relief effort – under the leadership of our other banquet guest Henry Morton Stanley – saw the first use of a prototype of a Maxim gun. Also carried on the relief effort was a Burroughs Wellcome & Co ‘Tabloid’ medicine chest – the first time one of Wellcome’s branded medicine chests was used by an explorer.

And indeed, Henry Wellcome’s later expenditure in Africa is indirectly linked to Maxim. Wellcome first visited Africa in 1901, travelling to the Sudan after Lord Kitchener had recaptured Khartoum. Seeing the chaos and disease brought to the city by war, Wellcome believed scientific research could be directed to improve the hygiene and wellbeing of the population. He offered the Government in Sudan fully equipped research laboratories to be housed in the Gordon Memorial College in Khartoum. The Wellcome Tropical Research Laboratories – as the laboratories were named – opened in 1902.

That Kitchener had captured Khartoum – and that Wellcome was able to visit – follows on from the British Army’s success in their battles against Mahdist forces, particularly the Battle of Omdurman in 1898. And the reason for the British Army’s astonishing success? Perhaps psychologically as much physically, but it’s clear that the rapid fire of the Maxim Gun made a fearsome and frightening difference between the two forces. 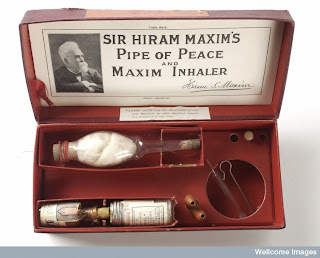 One last note: Maxim was an inveterate inventor – light bulbs, mouse traps and flying machines all were produced from his designs – but also a chronic sufferer of bronchitis. And in the years before his death, he designed and manufactured a steam inhaler. Maxim, indeed, is alleged to have commented on his inhaler: “From the foregoing it will be seen that it is a very creditable thing to invent a killing machine, and nothing less than a disgrace to invent an apparatus to prevent human suffering”.

One of Maxim’s inhalers – shown here – was obtained by Henry Wellcome and is now on display in the Medicine Man Gallery of Wellcome Collection: completing our circle of Maxim and Wellcome’s connections.