It is rare to find a manuscript from the early 15th century that combines folk remedies with religious iconography and a royal heritage to boot – even more rare is to find one that has been heavily defaced.

Such a manuscript exists in the Archives and Manuscripts collection at the Wellcome Library – MS.5262. Lara Artemis, former conservator here at the library, uncovered the manuscript as part of her MA in Medieval History. In the process, she unpeeled the layers of what turned out to be a fascinating and possibly unique insight, not only into medieval medicine, but of religious symbolism at a time of particular spiritual turmoil – the reformation. Although the dating remains speculative, it is believed to be from around the early 15th century partly because of the dedications within. There is proof of its 16th century ownership in the form of ‘Andrewe Wylkynson Surgeon’.

More intriguing is the fact that it belonged to Henry Dyngley of Worcestershire who died in 1589 and came from a line of staunch catholics and rural famers working as doctors. Dyngley married Mary Neville, the daughter of Knight Sir Edward Neville who not only held a long list of prestigious roles within the court of Henry VIII, but who descended from Edward II and Queen Isabel of England in the 13th century. Isabel was a keen patron of medicine and was famously paranoid about her health. It is no suprise then to find the health regimen, a sweet wine tonic, is dedicated to her at the end of the manuscript.

Equally fascinating is the manuscript’s association with oak. Not only is it bound in oak but the religious images feature oak trees and acorns in all but one. Traditionally a pagan symbol, the oak was re-interpreted by Christians to represent Christ, a symbol of endurance and strength in the face of adversity. Given the possible date of the manuscript, and the significant damage to the religious images only, suggests this manuscript is a rare survivor of Henry VIII’s iconoclastic reformation when vast quantities of religious materials were destroyed in a protestant bid to rid the country of any visible signs of catholicism.

Why did the iconoclast stop at the religious images only? The explanation seems to be clear: this was too useful a manuscript full of day to day ‘quick health fixes’ that would have been invaluable to a well-to-do family like the Dyngley’s. This was an era where university educated medical practitioners were in short supply, particularly in rural areas and folk remedies proved invaluable.

The practical recipes include how to reduce the swelling of the scrotum: “Who so hap ache or swellynge In his balloke” – the solution, a poultice from pounded barley and cumin mixed with honey applied to the offensive area. Another common but potentially harmful ailment was a skin disorder which is described ‘Who so hap pe wilde fire…”, in other words, ergotism, also known as St Anthony’s fire. This was a reaction to ergot fungus in barley meal, a common source of food in the medieval period, which famously caused bewitchment. The suggested cure involved applying cooked and strained leeks to the face in addition to white wine, rye meal, and eysel. Ergot contained a chemical that made sufferers go beserk, largely because it caused gangrene and eventual loss of hands, feet and fingers. If not treated, and it rarely was in the Middle Ages, the poisoning led to the sensation of being burned at the stake. St Anthony’s association with the ailment comes from the monks of the Order of St Anthony who achieved relative success at treating victims. To fund their charitable work, the same monks reared swine which partly explains the presence of the pigs in the image of St Anthony within the manuscript. Saint Anthony is the first to appear in the front of the manuscript. While the oak trees, acorns (traditional fodder for pigs and many other birds and animals), and a deer (another sign of conception, growth and thereby health) are clearly visible, the rest of the saint is clearly scrubbed out. If it were not for the red liturgical colour (for martyrdom) of his robe and the presence of the pig (a common attribute), his identity would remain a mystery. Although further investigation is necessary to establish any underlying drawing that may have been obscured, as well as dating evidence, it is clear that this, and the other religious images, have been destroyed quite deliberately. He is followed by St James who chops down an oak tree with his bare hand (presumably to reveal the medicinal properties of the bark), St John the Baptist, also with an oak tree and, this time, rabbits (possibly to suggest the Christians and the persecuted church, or at least Christians fleeing temptation), and lastly, a Bishop.

While St John is left off lightly by the iconoclast, mysteriously, the Bishop gets the worst treatment leaving only the 2 candles either side visible, symbols of Christ’s divine and human natures. 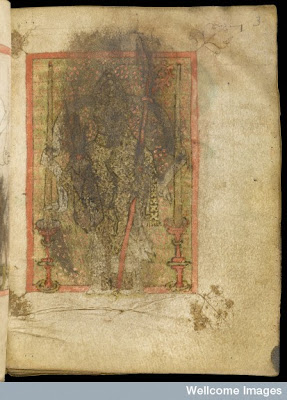 The manuscript also includes catchword illustrations, possibly charms that were copied and cut into a piece of bark (no doubt oak) of apple peel and placed on the wound as a health-inducing charm.

The manuscript offers a fascinating glimpse of medieval medical practice in English history. From ailment to treatment, it provides a practical medical resource to the practitioner, through both its scholastic and its ‘folk’ medical content. Further research is clearly needed to establish just how unique this manuscript is, more evidence of why it was partially destroyed and, if others exist like it.

2 comments on Saints, iconoclasts and recipies: a 15th century manuscript