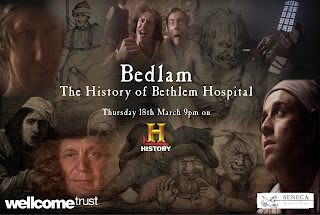 Tonight at 9pm, the History Channel in the UK will broadcast, ‘Bedlam’, a new documentary on the history of the Bethlem Royal Hospital, the mental institution from which the word ‘bedlam’ derives and which became notorious for the treatment of its patients.

Produced by Seneca Productions (and funded by the Wellcome Trust), the documentary uses dramatic reconstructions of scene’s from Bedlam’s history as well as interviews with experts on the hospital, such as Dr Jonathan Andrews, Catherine Arnold and Mike Jay. It’s also illustrated with content drawn from the Wellcome Library’s collections.

More details on the documentary are available through the History channel’s website and this microsite.

One Response to Bedlam documentary