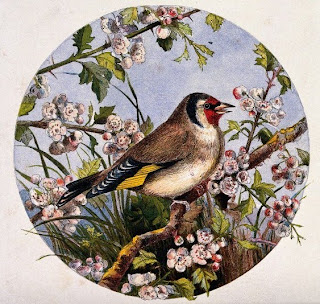 Today, officially, marks the first day of spring in the Northern Hemisphere: the point from which days are longer than nights, and the long winter is finally behind us. Of course, this is an artificial date: spring is not something that is switched on on a particular day, but a gradual process, a slow awakening that takes place at different times at different latitudes. There is strong variation even within the United Kingdom: the same flowers may be in full bloom in Cornwall, whilst Scotland will not see them for weeks yet. For each part of the country, however, there will be a rough average date at which, year on year, the different markers of spring appear: the first snowdrops, the first catkins, and – famously the subject of competitive letters to the Times – the first cuckoo.

Would you know, however, when those rough dates are for the place you live? Could you tell if the daffodils came out a week later than usual? And, faced with the recent news reports that spring is coming earlier each year, would you be able to judge their accuracy against your own experience?

And could you do it without using your eyes?

March’s item of the month gives us a fascinating look at a man who could have said Yes to all those questions: the scientist, mathematician and all-round “natural philosopher” John Gough (1757-1825). Gough was born in Kendal, in the Lake District, and lived in the area all his life. Like many contemporary significant figures in science, he was a Quaker. He was the son of a prosperous dyer in the town, and thus came from a social stratum that would not normally expect at that time to go to university. His father Nathan Gough, unusually, was prepared to pay for him to remain in full-time education longer than was customary at this time, and Gough was still studying in his early twenties. To this extent, we could see him as having had an advantage over his peers. However, although his father could contribute to Gough overcoming social barriers, there was one difficulty Gough faced that could not be remedied: he had been blind since contracting smallpox at the age of three.

Gough’s disability did not prevent him pursuing his scientific interests. As a teenager, for instance, he set up a botanical club at school, in which he would subject a plant to minute analysis with his fingers whilst another boy would read out its description; and he carried out experiments in his father’s dye-house. As a young man he studied mathematics and collaborated with a fellow Lakeland Quaker, John Dalton (father of the modern atomic theory): Dalton would help Gough with his scientific works and in exchange Gough would tutor Dalton in Latin and Greek. Gough corresponded with the Manchester Literary and Philosophical Society, and published papers on a wide range of topics, his core interest being in the physics and perception of sound – research in which he drew, of course, upon his own experience in using sound to compensate for his lost sight. 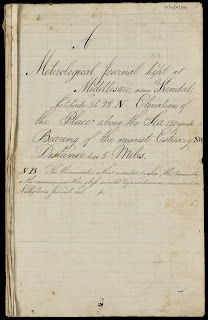 In the spring of 1807, Gough had just turned fifty years old. Our item of the month finds him in correspondence with another independent Quaker scientist, the chemist and meteorologist Luke Howard (1772-1864). Howard worked as a manufacturing chemist but his real interest was in meteorology: he subjected the weather and climate to long-term close examination and lives on today as the man who devised the classification scheme for clouds – stratus, cumulus and cirrus, and their various sub-categories. This classification – which revolutionised the way we look at the sky, delighted Goethe and has been cited as an influence on Constable and Turner – was first proposed in 1803. Four years later, when he and Gough corresponded, Howard was engaged in a long-term project to record the climate of London (which bore fruit in his book The Climate of London, originally published in two volumes in 1818-1820 and later reissued and enlarged in 1833). 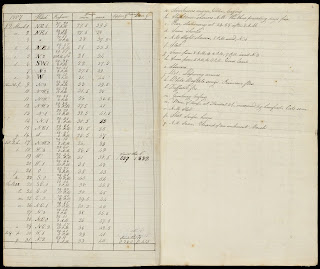 For Howard, Gough provides a detailed breakdown, day by day, of the spring of 1807: the weather and the changes in the natural world. The large manuscript sheets on which this is recorded are now held at the Wellcome Library as part of the papers of the Hodgkin and Howard families under the reference PP/HO/K/A14.

Gough gives us an account of natural phenomena minutely observed. There is weather, of course, both general description and also precise measurements of wind direction and speed, atmospheric pressure, maximum and minimum temperatures, and precipitation. But there is also the naturalist’s perspective, recording birdsong and the way that plants are opening out in their appointed sequence, a close engagement with a landscape that can no longer be seen but can be heard and touched. Some sample entries give the flavour of what seems to have been, like this year, a cold March, but one in which there is a perceptible gathering of pace as the days pass:

April continued intermittently cold, with two inches of snow as late as the 17th, and the fieldfare (a member of the thrush family that typically visits England from Scandinavia in winter) still present on the 20th. By the end of the month, however, he is noting the arrival of swallows (26th), thunder to the south and blackthorn blossom (30th) and – of course – the first cuckoo, on the 27th. All the markers of spring are in place.

On March 21st, incidentally, Gough records: “Wet. Lapwing arrives.” This weekend we invite our readers in northern Europe to walk in the fields – with luck, dry ones – and see if any lapwings have arrived to breed. (Identification details can be found here). For an extra taste of Gough’s work, sighted readers are invited to close their eyes, take a shoot or leaf between their fingers and feel it carefully, then try to work out how many different types of birdsong can be heard; and imagine themselves in the Lake District in 1807, as a long cold spell comes to an end and nature wakes itself.

The top image shows a chromolithograph of a goldfinch amidst cherry blossoms, from the Library’s Iconographic Collections. The other images are from Gough’s meteorological journal, PP/HO/K/A14.