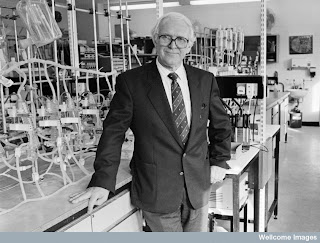 Sir James Black, Nobel-Prize winning pharmacologist, died on Sunday at the age of 85.

Between 1978 and 1984, Black was Director of Thereapeutic Research at the Wellcome Research Laboratories (these laboratories being part of the research wing of the Wellcome Foundation, the pharmaceutical business co-founded by Sir Henry Wellcome).

His Nobel Prize – awarded in 1988 for Physiology or Medicine – was shared with Gertrude B. Elion and George H. Hitchings, for their work on drug development (Elion and Hitchings also had strong ties to the Wellcome Foundation, working for almost all of their professional careers for the American wing of the business).

Obituaries have hailed Sir James Black’s achievements, particularly his work on beta-blocker drugs (Black is credited with discovering them in 1962). Such drugs now play in a vital role in the treatment of heart attacks and angina.

The Wellcome Library holds a number of items relating to Black. The Wellcome Foundation Archive contains a selected amount of material, with editions of Foundation News (the organisation’s in-house publication) contextualising Black’s work during his 6 years with the Foundation.

Black also contributed to two Wellcome Witness seminars: Peptic Ulcer: Rise and Fall (Vol. 14) and Clinical Pharmacology in the UK, c. 1950–2000: Influences and institutions (Vol. 33), (these being seminars at which “…significant figures in twentieth-century medicine are invited to discuss specific discoveries or events in recent medical history“). Copies of these works are held by the Wellcome Library and are also freely available online.

Item of the Month, July 2012: A summer excursion with Burroughs and Wellcome