Smoking with the ‘Family Doctor’

As today is No Smoking Day in the UK, we felt it was a worthwhile opportunity to flag up a few items from the Wellcome Library’s collections relating to tobacco. This in itself is no easy feat, given a simple word search on ‘tobacco’ on our online catalogue brings up nearly 1200 results…

We’ve decided to focus on two representations of doctors and one real-life epidemiologist. In discussing our Wellcome Film digitization project, we’ve previously flagged up the unhealthy habits of Nick O’Teen. Today we’ve turned to Smoking and You, produced by the Ministry of Health in 1963.

In Smoking and You, charts show the increase in cigarette sales between 1910 and 1960, as well as the increase in deaths from lung cancer. A doctor addresses the camera, warning of the risks to health from smoking and adds that he himself smoked until seeing the damage it caused to his patients.

Less than 20 years before, the (albeit fictional) Doctor narrating Family Doctor (1946), offers a very different attitude toward smoking, going as far as to offer a patient a cigarette to calm her nerves. For much of the film, the Doctor is seen puffing away on a pipe: an object as vital to his air of medical familiarity as his three-piece suit and gentlemanly manner.

This change from our smoking doctor of 1946 to one warning of the dangers of cigarettes in 1963 can in great part be put down to the research of Sir Richard Doll, who helped determine the link between smoking and lung cancer, as part of work carried out whilst he was part of the Statistical Research Unit of the Medical Research Council (the findings of which were first published in the British Medical Journal in 1950). 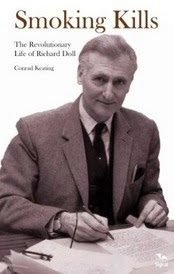 Doll was a smoker, but just like our Doctor in Smoking and You, gave up when the evidence in front of him convinced him to change his ways. Doll’s research may even have been enough for our Family Doctor to stop sharing cigarettes with his patients, and even put out his pipe.

One Response to Smoking with the ‘Family Doctor’