Sterilization and murder of psychiatric patients 1934-1945 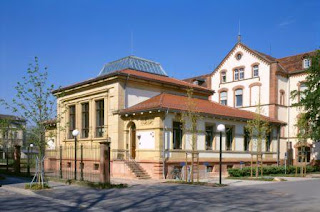 The Prinzhorn Collection in Heidelberg has opened a small exhibition of “Pictures of a forced sterilization” which were acquired in 2008. They are a series of pictures by Wilhelm Werner (1898-1940) who lived from 1919 in the asylum at Werneck in Bavaria.

The Nazi eugenic regulations came into force on 1 January 1934, and Werner was one of those forcibly sterilized as a result. From then until 1938 he made drawings of his experience, including one of a “Sterilization bus” flying the swastika flag. In the words of the Prinzhorn’s publicity, “He transformed the experience of the degrading intervention into a series of imaginative and original pictures.” In 1940 he was put to death as part of the Nazi “euthanasia” programme.

In addition, other works are on show by psychiatric patients who were also put to death between 1940 and 1945 because they were considered to be “lebensunwert” (unworthy of life).