The crust of it! This week is National Pie Week in Great Britain, celebrating the long history of pies and pasties in British cookery. Although the haggis and the Roast Beef of Old England occur more in song and story, food wrapped in pastry is a running motif in the story of British cookery, eaten by kings and labourers alike. The Wellcome Library’s holdings relating to food are extensive – we have already mentioned, for instance, our large number of manuscript recipe books, of which the seventeenth-century items are now online. Browsing through these, the reader comes across all manner of pies: penny-plain or decorative and fancy, basic and nutritious or figurative and metaphorical, palatable or disgusting. Here we highlight some pastry-wrapped delicacies from our collections.

All manner of recipes for savoury pies occur in the manuscript collection. For the modern reader, used to the dominance of a few types of meat as pie fillings, their variety comes as a surprise: in particular, seafoods are a common filling, with oysters, lobster and shrimps (the last-named being measured in quarts rather than by weight: a heroic quantity) all being used. We, however, will highlight another recipe, one that sheds incidental light on a common turn of phrase. We speak still of someone “eating humble pie” when we mean that they have been humiliated: the expression comes ultimately from a French word for the entrails of a deer, Humble Pie (or Umble Pie, as it was originally) being made from these less choice cuts after the more sought-after parts of the animal had been taken. In our MS.3769, compiled by a Mrs Jane Parker around 1651, we find a pie slightly further down the social scale than this, even: an ersatz Humble Pie to be made from lamb’s meat.

Take a lambs head and portenance and parboyle it a litell and then Chop it small as you doe for minst [mince] pies with a po[u]nd of beefe suet, a pou[n]d corrance [currants] [and] a few sweet herbs[;] season it with peper and salt and so bake it[.] When it comes out of the oven you may put a litell sack [sherry] with a litell sugar and a litell boter [butter] and warme it and put it into the pie.

How to make the pastry case, in this recipe, is seen as too obvious to bother mentioning. Noticeable also in seventeenth century recipes is the absence of timings or oven temperatures – these are refinements that only come in when items are cooked in predictable gas or electric ovens. Working on an old-fashioned kitchen range, whose temperature would differ from house to house and from day to day, the cook would simply put the item in and let it bake until it was done, testing frequently and adjusting in the way we still do now with items cooked on the top of the stove. The British pudding, in which beef suet can be used in a sweet dish, often startles people from other countries. It is interesting to see the same combination of suet and fruit in this savoury dish, suggesting that we are misguided in drawing a sharp line between sweet and savoury dishes when looking at these traditional recipes. The recipe book of Hannah Bisaker (née Buchanan), dating from 1692, endorses this view, with the many pies listed in its opening pages including, next to each other, “Veale Pye Savery” and “Veale Pye Sweete”. As we noted in an earlier blog posting, however, Bisaker’s recipe book is of particular interest for the attention it pays to the outside of pies as well as their content. For Jane Parker, the pastry case was something not even worth mentioning in the recipe. Hannah Bisaker, in contrast, gives up several whole pages to templates for elaborate pastry shapes. Whatever the content of her pies – and as well as the two veal recipes mentioned above, she cites hare, venison, mincemeat (using real meat) steak and “stump pie”, a sweet recipe combining meat, sugar and dried fruit, just in the first few pages – they would be housed with appropriate care and ceremony. 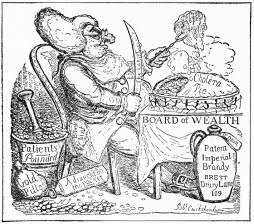 From pies literal to pies figurative, and a much less palatable recipe. On the shelves of the Library’s Reading Room, Howard W. Haggard’s 1929 history of medicine Devils, Drugs and Doctors reproduces a caricature by Robert Cruickshank (brother of the more famous George) in which a corpulent doctor tucks into “Cholera Pie”. The image reflects the belief that an epidemic that was disastrous for the public was good financial news for the doctor: his pie here rests on a table labelled “Board of Wealth”, a pun on “Board of Health”. For the ultimate in unsavoury pies, however, we must go to Fleet Street and the story of Sweeney Todd, the famous barber whose customers reputedly ended up in the products of his neighbour’s pie shop. Sweeney Todd: the real story of the demon barber of Fleet Street sits on the Library’s shelves at shelfmark KM.43 (and in passing, how many of our readers know that this shelfmark takes them to a long rank of works on famous British murderers?). Mercifully, it contains no recipes.

The image at the head of this posting is an engraving after Hogarth, whose details can be seen here.

All recipes cited here are tried strictly at the cook’s own risk; and pies containing human flesh, of course, should not be made at all.