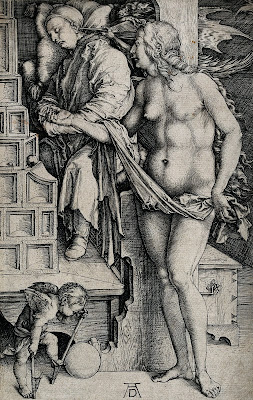 Engraving by Albrecht Dürer. Wellcome Library no. 570763i.

Albrecht Dürer’s engraving traditionally called “The doctor’s dream” is thought to be an early work, dating from his late twenties, i.e. circa 1497-1498. It shows a man sleeping by a hot stove as a devil blows evil thoughts into his ear. His thoughts are perhaps visualised in the figure of Venus, who gestures towards the stove, and Cupid, who learns to walk on stilts in the foreground. The print was already known in 1609 as “Der traümende Doctor” (The dreaming doctor). The man is certainly sleeping and he does look somewhat like the traditional representation of the scholar.

The subject has been compared (by Erwin Panofsky) with the description of the sin of sloth in Sebastian Brandt’s Ship of fools (1494), which, as Panofsky says, “might well serve as a caption to Dürer’s engraving”:

A sluggard is no use except to be a hibernating dormouse and to be allowed a full measure of sleep. To sit by the stove is his delight … But the Evil One takes advantage of laziness and soon sows his seeds therein. Laziness is the root of all sin. It caused the children of Israel to grumble. David committed adultery and murder because he lolled in idleness [1]

Some of the ingredients of the composition, such as the costume of the man and the ceramic stove, are recognizable features of material life in Germany around 1500, but almost every item shown has some connotations over and above what it literally represents. The apple resting on a ledge of the stove, for instance, is both an apple and the cause of the Fall of Man. In the same room as the “real” sleeping man we see Venus and Cupid, who are imagined entities (deities), based on human woman and children but seen only in the mind’s eye. In the same room again as those nude pagan deities is the half-hidden monstrous Devil of Christian lore, described in the Apocalypse. When beings from at least three different worlds are brought together in one composition, the resulting mixture of object and connotation, realism and allegory, was calculated to spark off a rich array of thoughts and feelings in the prepared mind. [2] 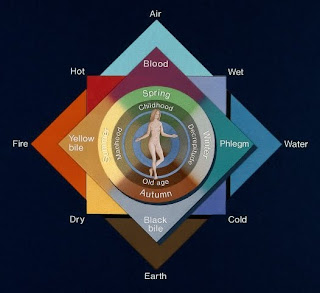 Above: the elements, qualities, humours, seasons, and ages of man. Airbrush by Lois Hague, 1991. Wellcome Library no. 114i.

For instance sloth (acedia) is one of the seven cardinal sins, but Galen says in chapter XXII of his Art of medicine that people whose brains are of a wet and cold temperament are inclined to heavy sleep and drop off easily; the humours that correspond to the quality cold are phlegm and melancholy; melancholy is an occupational disease of scholars (as in Dürer’s print Melencolia I); scholars are acquainted with the supernatural beings described in ancient literatures … and so on. The unified thought-systems of the time permitted and encouraged such leisurely mental promenades.

Nowadays impressions of this print come on to the market with increasing rarity. Already in 1803 it was described by the connoisseur Adam Bartsch as “du nombre des rares”. A very fine impression belonging to a collector called Robert Balmanno and sold by him at Sotheby’s in 1830 (yes, 1830) was re-sold at Sotheby’s in London on 6 July 2001 (lot 20) for £33,850, which probably seemed a large sum at the time, and even more so a couple of months later. However the same impression was re-resold at Christie’s in London on 5 December 2006 (lot 36) for £66,000.

Now, by coincidence, two somewhat less fine impressions than Balmanno’s are being offered by Sotheby’s and Christie’s in London on two successive days in 2010. Sotheby’s sale on 30 March (lot 18) has what they describe as “a good impression” with an estimate of £4,000-£6,000 (€4,550-6,900), while in Christie’s sale on 31 March, lot 17, described as a Meder d/e impression, with some defects, has an estimate of £7,000-£10,000 ($11,000-15,000). Not a huge amount for a five hundred year old work by a man considered to be Germany’s greatest visual artist. However, given the unpredictability of auctions, anything could happen. Whoever bids will not be competing against the Wellcome Library, as the Library already has a respectable impression.

One Response to “The doctor’s dream”