Too big to fail?

Eighteen months ago, the collapse of the Lehman Brothers merchant bank touched off ripples around the world, a disturbance of the financial system whose consequences are still not worked out. In the aftermath of the bank’s collapse (and the run on Northern Rock a year earlier), we have heard a lot about banks that were “too big to fail”, about those which the government could allow to go under and those which needed to be propped up. As Lehman Brothers (and its auditors) re-enter the news, it is topical to look back 150 years to another bank that ultimately was not too big to fail.

In the feverish financial climate of the past few years there have been frequent references to one potential crash or another being “the biggest since the collapse of Overend, Gurney and Company in 1866”. In particular, it was noticed in 2007 that Northern Rock were experiencing the first major run on a British bank since Overend, Gurney and Company. A few documents in the Wellcome Library shed light on this episode, one which until recently was known about chiefly by business historians. 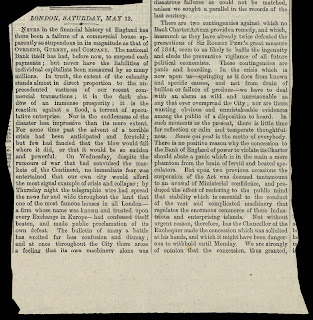 Overend, Gurney and Company was founded in 1800 as Richardson, Overend and Company. In 1807 Samuel Gurney, a member of a well-known Norwich Quaker family (who had founded Gurney’s Bank, now part of Barclay’s) joined the firm, and in 1809 he took it over and gave it its new name. It was a wholesale bank that became known as “the bankers’ banker”, and whose trade was in bills of exchange – in effect, buying and selling debt. It throve in this role and weathered one major financial crisis in 1825, bailing out other bankers at that time. The problems arose after the death of Samuel Gurney in 1856. To buy and sell debt requires considerable cash reserves in order to insulate oneself against the inevitable occasions when someone defaults and a bill of exchange becomes a useless piece of paper. After Gurney’s death, the bank turned more to long-term investments – particularly in railways – as a way of holding its assets: prudent for an individual, perhaps, but ill-suited to a bank whose role requires it suddenly to come up with large amounts of cash to absorb losses. Overend, Gurney and Company found itself in 1865 owing £4 million and with liquid assets of only £1 million – debts outweighing assets by 300%. A stock-market flotation was hit hard by a drop in the value of shares and in 1866 the bank found itself in serious trouble, its offices besieged by panicking crowds. As with Lehman Brothers (but not Northern Rock), there was to be no bail-out: in early May the Bank of England told Overend, Gurney and Company that it would not underwrite them, and that they would have to sink or swim on their own. The end came quickly: on May 10th 1866 the bank suspended payments, owing £11 million (equal at today’s prices to over £900 million) and touching off a financial collapse, in which over 200 companies went under as a result. 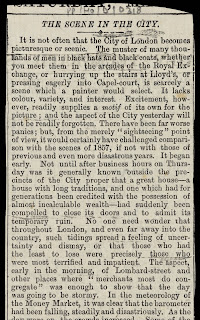 It is a familiar story to us now, and the consequences also ring bells. Caught up in the backwash were the executors of Thomas Hodgkin, the pathologist, who had died a little over a month before. Hodgkin was a Quaker and moved in the same circles as many characters in the Overend and Gurney story: his family knew the Gurneys well, and also knew many of the Quaker promoters of railway companies affected by the financial turmoil. His personal connections, ironically, may have made him particularly vulnerable in this collapse, making it likely that the very things worst affected were those in which Hodgkin had invested. In his financial papers, gathered by his executors, are various share certificates in railway companies, from the pioneering Stockton and Darlington onwards: pieces of paper whose value would have diminished substantially after the collapse. His executors would have found themselves dealing with a considerably smaller estate a matter of weeks after his death, and it is doubtless for this reason that the executors’ papers include several newspaper cuttings on the collapse (pictured), which describe the atmosphere in the City of London as the collapse unfolded, the men in dark suits and hats gathering at street-corners to exchange gossip on the latest twist.

Banks trading in debt, banks taking on too much debt relative to their assets, debates as to whether to let them fail, individuals and companies caught in the financial storm seeing their own assets shrink: history may not exactly repeat itself, but it’s not averse to recycling well-worn plot motifs.

The papers of Thomas Hodgkin form part of the Library’s large archive of the Hodgkin and Howard families, whose catalogue is visible on the Library’s archive database.