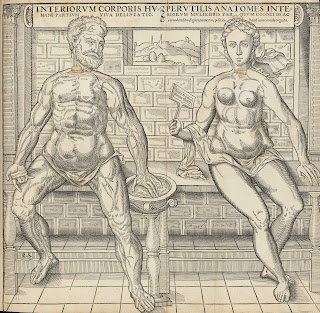 It is a quaint term used by bibliographers since the 1920s to refer to prints (woodcuts or engravings) that circulated as single sheets from the 1530s to the mid-17th century, and which showed anatomical figures: the organs are cut to outline and pasted on the sheet in layers so that they can be lifted up one layer at a time. [2] 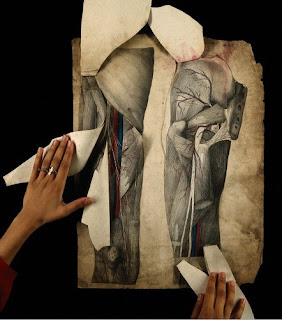 It was a publisher’s practice that was revived at various times in the 19th century: examples of books containing such sheets are E.W. Tuson’s A supplement to myology, (London 1828), Gustave Joseph Witkowski’s Anatomie iconoclastique (Paris 1874-1876) and Etienne Rabaud’s Anatomie élémentaire du corps humain (Paris 1900). In the 20th century the same principle was used in Dr Jonathan Miller’s best-selling pop-up book The human body (London 1983), as well as in books for medical and nursing students.

Kate Heard’s new discovery is a document in the British National Archives. It is a letter from Edmund Bonner, the British ambassador at the court of Francis I in Paris, to Arthur Plantagenet, Viscount Lisle (b. before 1472, d. 1542), the deputy of Calais. Bonner was a canon of St Paul’s and a future bishop of London. Lisle was the illegitimate son of Edward IV (1442–1483) and therefore the uncle of Henry VIII. In Calais he was responsible for defending and governing the city, and for running spy-rings in north-east France and the Netherlands. His wife Honor accompanied him in Calais. [3]

Bonner wrote to Lisle in late July 1539 sending gifts to both Lisle and his wife. For Lady Lisle Bonner sent a turquoise (jewel), and for Lord Lisle “nothing of noveltie save this present which of late was here emprinting”, i.e. a printed novelty of some kind. The subject is further described as follows, in Heard’s transcription:

the anatomie of the man is iuged here to be doon exquisytlie, the anatomie of the woman pleaseth me not soo moche how be it mr bekynsall that is married & hath had but oon childe telleth me, that that is the figure of women in their travayl, to whos iugement, because I am ignorant, I leve the matter, thinking that he toke consultacion with some mydwife touchyng his sentence.

(i.e. The anatomy of the man is judged here [in Paris] to be done exquisitely, the anatomy of the woman pleases me not so much. Howbeit, Mr Beckinsall who is married and has had but one child tells me that that is the figure of women in labour; to his judgment, because I am ignorant, I leave the matter, thinking that he consulted some midwife about his opinion.)

What was this print? Given the date, mid-1539, it must surely have been one of the first anatomical fugitive sheets, a pair of woodcuts of a man and a woman which were published in Paris in the very same year of 1539 by Jean Ruelle (Carlino no. 6). 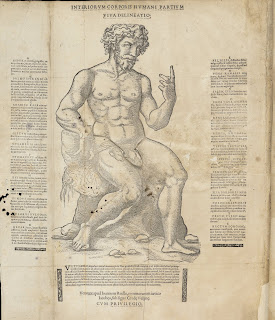 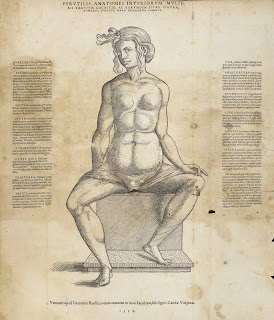 Above: the man and the woman, in a pair of anatomical fugitive sheets, Paris 1539. Detail from the woman’s print showing the imprint.
Wellcome Library.

The imprint on each print states that it was for sale at the sign of the Fox’s Brush in the Rue Saint-Jacques in Paris. Since only two anatomical fugitive sheets from before 1539 are recorded (one from Strasbourg and one from Augsburg), Bonner was well advised to describe his gift as a “noveltie”. The full belly of the woman in Ruelle’s print could be interpreted as a sign of pregnancy.

A possible alternative mentioned by Heard is a single sheet of a man and a woman which exists with French text pasted on it. It is reproduced above, at the top of this posting. However, no French edition of this print is known from as early as 1539. The paddle held by the woman contains text in Latin and English, and the version which has the French wording refers to “Maistre Andre Vesali” which implies a later date: Andreas Vesalius published his anatomical treatise De humani corporis fabrica in 1543. He had published Tabulae anatomicae sex in 1538, but those tables showed skeletons and viscera, unlike the Ruelle plates.

There has been much discussion of the purpose and audience of anatomical fugitive sheets, which is frustrated by the lack of independent contemporary comment on them. Here in Bonner’s letter is a testament to their novelty, their esteem among Parisian connoisseurs, and their suitability as a gift from an ambassador in Paris, not to a medical student or a natural philosopher but to a noble courtier who would appreciate a novel work of art. There is also of course the interesting remark that Mr Beckinsall (John Beckinsall, another English functionary in France known to both Bonner and Lisle) must have consulted a midwife before giving his opinion that the woman would be pregnant. Bonner must be joking here, perhaps provoking his friend to lift the flaps and see whether a foetus is depicted in the womb (it is, as can be seen in the sequence of still images reproduced in the Wellcome Library catalogue).

For other implications of the letter, the reader is referred to the article in Print quarterly.