Edward Jenner and his moving statue

Broadcast tonight in the UK on BBC1, will be the latest episode of Doctor Who, in which the time traveller with the medical title meets again with the ‘Weeping Angels‘, creatures with the appearance of statues but who can move in the blink of an eye. Timely, given a less frightening example of a moving statue (or really, a statue whose position has changed) has caught our attention in recent weeks. 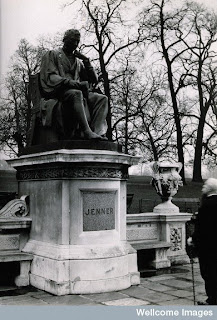 Here’s the statue in question: it’s of Edward Jenner (1749-1823), the pioneering vaccinationist. This photograph was taken between the wars in Kensington Gardens in London and in 2010 it’s where you’ll still find the statue.

However, when it was erected by its sculptor William Calder Marshall in 1858, the statue stood a couple of miles or so east in Trafalgar Square. And as discussed in a recent edition of the British Medical Journal, a campaign has begun to return the statue to the Square.

A detailed account of the movement of Jenner’s statue, is given in an article written by John Empson for the Journal of the Royal Society of Medicine in 1996 (and now freely available through PubMedcentral). The article illustrates where in Trafalgar Square the statue stood, and that Prince Albert (a keen supporter of vaccination) presided over the inauguration of the statute on the site in 1858. It also states how opinion soon turned against Jenner’s statue and how this medical figure appeared not to be in keeping with the militaristic nature of the Square’s other statues.

Perhaps in relation to Prince Albert’s death in 1861, Jenner’s statue – now lacking its most prominent supporter – was moved in 1862 to Kensington Gardens. But as Empson’s article states, Kensington Gardens does have some ties to smallpox: the development of the Gardens arose from William III building Kensington Palace, and it was from smallpox which William’s mother, father and wife all died. 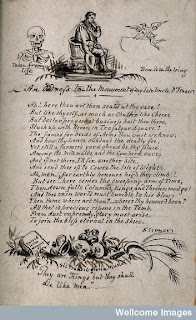 Related to this question of the proper site to memorialise Jenner is an item from the Wellcome Library’s collections, which discusses the matter in verse. Written in the nineteenth century by Edward Jenner’s great nephew Stephen, this poem is illustrated with a sketch of Calder Marshall’s Jenner statue. Should the statue be in Trafalgar Square with military heroes or perhaps:

After cow-based puns (based upon, of course, Jenner first vaccinating using lymph from a cowpox pustule), we’ll conclude with the poet’s final words on Jenner’s fame:

Then fame where art thou? – where’s thy honour’d boon?
All that is precious ripens in the Tomb
From dust supremely, glory must arise
To join the bliss eternal in the skies