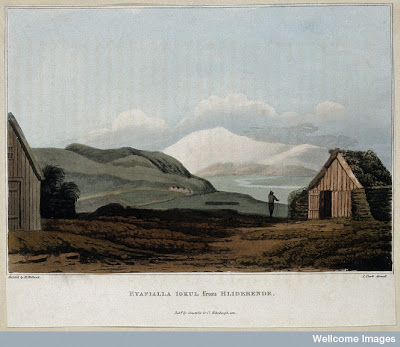 Whilst the world waits, literally and metaphorically, for the dust to settle from the recent volcanic eruptions in Iceland, we thought we would pass on this representation of the Eyjafjallajökull glacier 300 years ago, during rather calmer times.

It’s a coloured aquatint, based on a plate from a work by Sir George Steuart Mackenzie (1780-1848), Travels in the island of Iceland (1811). The Wellcome Library holds a copy of this work, along with a number of other aquatints and engravings based on some of the book’s plates.

Mackenzie was a chemist, geologist, and antiquary, whose landed seat was in the Highlands of Scotland (albeit the relatively low-lying eastern parts of Ross-Shire). Known as an agricultural improver, Mackenzie has been one of the Highland ancestral land owners indicted as part of the ‘Highland Clearances’ (which adds another shade to his thoughts on the relatively unpopulated countryside of Iceland).

Steered towards Geology whilst studying Chemistry at the University of Edinburgh, Mackenzie also developed an interest in Iceland, and in 1810 journeyed there. His published account of his travels described the natural history of the island, along with Iceland’s history and literature.

The work also described the diseases of the inhabitants. No surprise, given that Mackenzie was joined on his journey by the physicians Henry Holland (1788–1873) and Richard Bright (1789–1858). Bright and Holland made significant contributions to the publication, and it’s from a sketch by Holland that the plate of ‘Eyafialla Iokul’ is derived from.

During the travels of Mackenzie, Bright and Holland, Eyjafjallajökull lay dormant. Mackenzie though, finishes his account with words that certainly chime in April 2010:

If the details I have given shall have afforded any amusement to geologists; and if they shall induce them to pay more accurate attention to volcanic countries than has hitherto been bestowed upon them, I shall recollect only with pleasure, the difficulties and dangers to which I subjected myself, in exploring a country, which everywhere presents objects to fill the scientific mind with astonishment and delight.

Iceland may have filled the scientific mind of Mackenzie in 1810 with “astonishment and delight” but for travelllers stranded by flight restrictions caused by the Icelandic eruptions in 2010, those probably are not the emotions that the geology of the island inspires.