Richard Dadd in France – and in New York 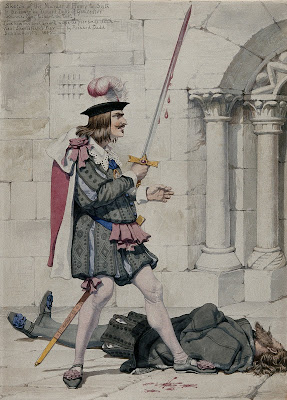 “Sketch of the murder of Henry the Sixth in the Tower by Richard Duke of Gloucester, afterwards King Richard the Third … by Richard Dadd, Bethlem Hospital, 1853.” Wellcome Library no. 570213i

On 28 August 1843 the painter Richard Dadd, who had previously shown signs of insanity, stabbed his father to death in Cobham Park in Kent, believing him to be the devil in disguise. He then escaped to France, where his attempted murder of a fellow traveller in a carriage led to his arrest, imprisonment in a series of French asylums, extradition back to England, trial, and admission to a secure ward in a lunatic asylum for life. After twenty years in Bethlem (1844-1864) he was moved to Broadmoor secure hospital where he died in 1886. As an artist he is best known for two extraordinary paintings: The fairy-feller’s master-stroke, in Tate Britain (presented by Siegfried Sassoon in 1963; not always on display) and Contradiction: Oberon and Titania, which currently belongs to Andrew Lloyd Webber. [1]

Dadd’s flight to France after the murder was natural enough, for he had only recently arrived back in England from France after a foreign trip to Turkey, Syria, the Holy Land and Egypt in the retinue of Sir Thomas Phillips (1801-1867: not the manuscripts-collector Sir Thomas Phillipps, as erroneously stated in the original version of this posting, but a former mayor of Newport in Wales). Dadd’s episodes of madness in France will have left some evidence there, but none has hitherto been cited. Now references to him in medical literature have been traced by Hélène Klemenz who has published a note on them in the current issue of the The Burlington magazine. [2].

After being shunted through five other asylums, Dadd was admitted to the psychiatric hospital at Clermont de l’Oise, about 35 miles north of Paris, where he was a patient for ten months of the physician Eugène-Joseph Woillez (1811-1882). Woillez discussed Dadd in a monograph that he published in 1849 “on the improvement of the lot of the insane person considered as a social individual”. [3] Historians may be forgiven for overlooking this work: the union catalogue OCLC records no copy of it in the UK or USA and only three copies in France (Paris 2-Bordeaux 1). Fortunately a digital copy of the printed text is available on the Gallica website of the Bibliothèque Nationale de France.

Woillez’s earlier publications were on antiquarian subjects: the British Library has under his name a work on “Archéologie des monumens religieux de l’ancien Beauvoisis, pendant la métamorphose Romane”, Paris 1839-1849 and an article on the iconography of lilies in mediaeval heraldry (the fleur de lis figures on the Clermont coat of arms). [4] His later published works are mostly on respiratory medicine. In the middle comes the rare monograph on the improvement of the life of the insane dating from his time as director of the asylum at Clermont, when he, like Philippe Pinel in Paris, had occasion to ponder on how the lives of asylum inmates could be improved. 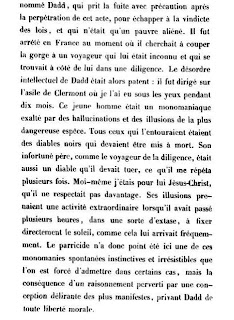 A rough translation of the passage about Richard Dadd follows:

“The newspapers of 1845 reported the parricide committed in England by a distinguished painter named Dadd, who fled knowingly after the perpetration of that act in order to escape the punishment of the law, and who was nothing but a poor lunatic. He was arrested in France when he tried to cut the throat of a traveller who was unknown to him and who happened to be next to him in a carriage. Dadd’s mental disorder was then obvious: he was directed to the Clermont asylum where I had him under my eyes over ten months.

“This young man was a monomaniac exalted by hallucinations and illusions of the most dangerous type. All those who surrounded him were black devils who had to be put to death. His unfortunate father, like the traveller in the carriage, was also a devil whom he had to kill, as he told me several times. I myself was Jesus Christ to him, not that he respected me any the more for it.

“His illusions took on an extraordinary degree of activity when he had spent several hours in a sort of ecstasy, staring directly at the sun, which happened to him frequently. The act of parricide in this case was not at all one of those spontaneous, instinctive and irresistible bouts of monomania which one is compelled to admit in certain cases, but the consequence of reason perverted by the most manifest type of raving imagination, depriving Dadd of all moral freedom.”

For the context in which this description occurs, see the book. Among other subjects, Woillez also discusses the possible prevention of aggressive behaviour by the insane, and what right the state has to prevent it by pre-emptive incarceration before any criminal act has been committed—a question still being wrestled with today. Klemenz states that Woillez’s case notes on Dadd are in the archives of the Hospital of Clermont de l’Oise, and refers to some of them: specifically, that Dadd was staring at the sun because he regarded it as an incarnation of Osiris, a deity he had become involved with while attending Phillipps in Egypt. He still believed that he was subject to the arbitrary whim of Osiris thirty years later in Broadmoor.

The watercolour by Dadd reproduced above shows Richard Duke of Gloucester, subsequently King Richard III, after killing Henry VI in the Tower of London in May 1471. It is one in a series of watercolours of the passions, this one being Hatred. The duke gloats over the red gouttes of Lancastrian blood that dribble down his sword and splash on to the ground. Another version of the same subject (in Bethlem Hospital) is called by Allderidge “one of Dadd’s most frightening pictures”. If it is just a strange coincidence that a man called Dadd should have killed his father, what must have been going through that man’s mind when, being called Richard and having committed murder by stabbing with a knife, he painted another man also called Richard holding a sword dripping with blood? 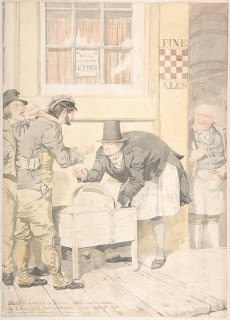 Another fine watercolour by Dadd in the same series was bought in 2007 by the Metropolitan Museum of Art in New York City, and is reproduced here from the museum’s online catalogue. The watercolour was discovered by Andrew Sim of Sim Fine Art in a provincial auction in the UK: although recorded, it had been lost after it was auctioned at Christie’s in 1870, and no illustration of it existed. Annotated by Dadd “Sketch to illustrate the passions. Senility or peevishness”, it shows a suspicious old man selling something from a barrow to two ruffians outside an inn, watched by the inn-keeper holding a pipe. Now New Yorkers do not need to travel to London to enjoy a frisson at Richard Dadd’s menacing sense of humour.

3 comments on Richard Dadd in France – and in New York