The latest attempt to separate conjoined twins is going on in London. In this case the twins are Hassan and Hussein Benhaffaf from East Cork, and the operation is proceeding at Great Ormond Street Hospital. [1]

From about 1830 conjoined twins were called “Siamese twins”, “jumeaux siamois”, etc., so named after the twins Chang and Eng. [2] 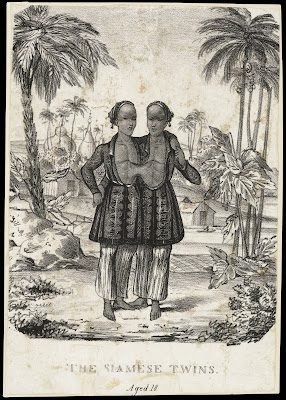 Their visit from Siam (Thailand) to Europe and their exhibition in the 1830s set off a wave of “Siamese twin” mania. A painting of them by Edouard-Henri-Théophile Pingret on their visit to Paris in 1836 is in the Wellcome Library, as are many other depictions. The lithograph above is unusual in referring to their Thai origins through the temples in the landscape shown in the background. Characteristic Thai temples can now be seen in the west (in the Parc Denantou in Lausanne, for example), but in 1830 they were much less familiar in Europe. 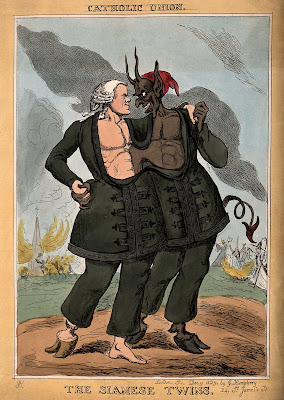 Coloured etching by Sharpshooter, 1829. Wellcome Library no. 12225i

The use of Chang and Eng as a metaphor for political alliance quickly followed. On 9 December 1829, soon after their arrival, the satirist who called himself Sharpshooter was quick off the mark in showing the Irish political leader Daniel O’Connell as conjoined with the devil in “Catholic Union” (above). 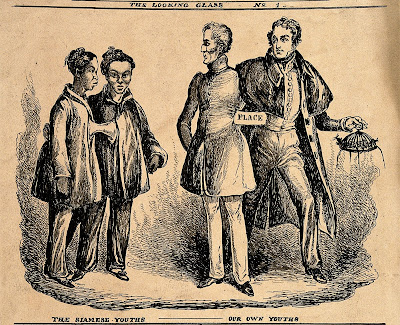 William Heath, in his publication The looking-glass on 1 January 1830, showed the leaders of the two wings of the Tory party, the Duke of Wellington and Sir Robert Peel, as comparable to Chang and Eng joined by “Place” (corrupt patronage), but by nothing else: at this time Wellington (Prime Minister) and Peel (Home Secretary) were scarcely on speaking terms. As Home Secretary, Peel was busy creating the police force (in this print he is wearing a policeman’s uniform). Separation was not hinted at because separation of conjoined twins was not possible within the surgical techniques of the time. 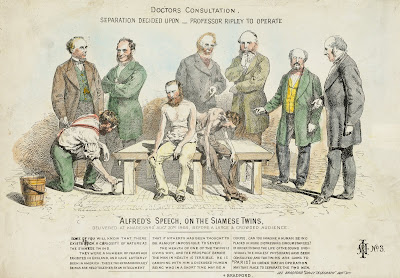 The lettering mentions Chang and Eng, showing that they were still remembered from nearly forty years before, but for the first time in these satires the possibility of surgical separation of the twins is raised:

Some of you will know that there exists such a curiosity as the Siamese twins. They were a number of years ago exhibited in England, and have latterly been in America. These two extraordinary beings are held together by an integument that it hitherto has been thought to be almost impossible to sever. The health of one of the twins is giving way, and the prospect before the man in health is terrible. He is carrying with him a diseased human being who in a short time may be a corpse. Can you imagine a human being placed in more distressing circumstances? In order to save the life of the sound individual the highest physicians have been consulted, and the twins are going to *Paris [footnote: “*Bradford”] in order that an operation may take place to separate the two men.

The protagonists seem to be well-known Bradford politicians. “Professor Ripley” may be Sir Henry William Ripley, 1st Baronet: he was elected Member of Parliament (Liberal) for Bradford in the general election of 17 November-7 December 1868, but his election was overturned on petition in 1869. He then changed allegiance and was finally elected as Member of Parliament (Conservative) for Bradford in 1874, and sat until 1880. “Alfred” may be Alfred Illingworth (1827-1907), who was elected Member of Parliament (Liberal) for Knaresborough in 1868-1874, and was re-elected as a Liberal for Bradford in 1880, defeating the Conservative, his former Liberal ally Henry William Ripley; Illingworth held his seat until 1895. The print therefore seems to describe the separation of the twin Liberals in 1869 when Ripley’s election was overturned, rather than 1880 when he joined the Conservatives.

The description of Alfred Illingworth in the Oxford Dictionary of National Biography (“tall, spare, alert, ruddy-bearded, and hawk-visaged”) fits the twin on the left of the present print, but “Alfred” is named as the commentator, not as the twin, which makes the print difficult to understand for anyone not familiar with Bradford politics of the time. This was the world repeatedly caricatured by the satirical genius Michael Wharton (“Peter Simple”) as dominated by “Alderman Foodbotham, the 25-stone, crag-jawed, iron-watch-chained, grim-booted perpetual chairman of the Bradford City Tramways and Fine Arts Committee”, whom neither of the conjoined twins resembles: so much for satire.

The Bradford print is an example of the impact of medicine on society, rather than, as usual, the other way round: a new surgical technique becoming the language of political comment. Separation of conjoined twins from Armenia after the death of one of them is recorded in Byzantium around the year 945: there is even a painting of the doctors carrying out the operation.[3] But that was an isolated example, and separation did not become feasible (supposing it were desired) until the introduction of total anaesthesia in the 1840s and ’50s.

These two fellows shouting “Den Juden Tod!” (“Death to Jews!”) were the leaders of the Vienna Nazis in 1927. Dr Anton Jerzabek (1867-1939) was a municipal physician in Vienna and leader of the Austrian Antisemitenbund. Dr Walter Riehl (1881-1955), a lawyer, was the antisemitic chairman of the Deutsche Nationalsozialistische Arbeiterpartei (DNSAP) in Austria. The print shows them so closely united in one body that, unlike Chang and Eng, they have only one pair of limbs between them.

That was then. What about now? It is possible that, as a result of the General Election in the United Kingdom on 6 May 2010, a coalition government may come to power. Should it do so, and should it (as coalitions tend to) later fall apart, how long will it be before satirists take up again the theme of the Siamese twins initiated by Chang and Eng back in 1830? It would be a triumph for surgical experimenters if the two leaders were to be shown walking away from each other with “Hassan” and “Hussein” written on their backs.

[3] G.E. Pentogalos and John G. Lascaratos, ‘A surgical operation performed on Siamese twins during the tenth century in Byzantium’, Bulletin of the History of Medicine, 1984, 58: 99-102

One Response to Siamese twins, real and metaphorical