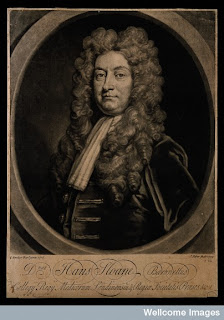 Sir Hans Sloane was born 350 years ago today, on 16th April 1660, in Killyleagh, County Down, Ireland. He studied medicine in London and Montpellier, and then spent two years in Jamaica as personal physician to the island’s governor, Christopher Monck, second duke of Abermarle, and where he begun to collect natural specimens.

On Sloane’s return to London in 1689, he married a wealthy heiress and established an immensely successful medical practice (later becoming physician to Queen Anne and then George I and II). Besides this, Sloane also made a considerable amount of money promoting the medicinal attributes of Peruvian (or Jesuit’s) bark and milk chocolate. He also became a key figure in the Royal Society: being elected as a Fellow in 1685, and later being elected Secretary in 1693 and succeeding Isaac Newton as President in 1727.

Sloane was fascinated with the world in which he lived and was able to put together a most comprehensive collections of specimens – plants, animals, insects, minerals and other rarities. These were to become the foundation collections for the British Museum after Sloane’s death in 1753.

As for the books he collected, The Sloane Printed Books Project, funded by the Wellcome Trust in collaboration with the British Library, is working to identify Sloane’s library of about 45,000 books which are now dispersed amongst the British Library, British Museum and Natural History Museum. 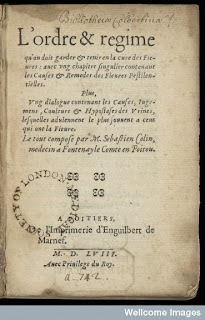 A substantial number of Sloane’s books left the British Museum in duplicate sales held between 1769 and 1832. Many of these are now to be found in other libraries, both in the UK and elsewhere. There are over 100 books from Sloane’s library in the Wellcome Library. Most of these are now identified in the library catalogue and we hope to have completed this work by the end of the year. The example shown has Sloane’s catalogue number ‘a.742’ at the bottom of the title page. It’s an edition of Benacio Lisset’s L’ordre et regime qu’on doit garder et tenir en la cure des fièvres, and was previously owned by Jean-Baptiste Colbert (1619-1683), finance minister to Louis XIV.

Understandably, there are a large number of events being held this year to celebrate the 350th anniversary of Sloane’s birth (many of them highlighted in a post on the Birkbeck Early Modern Society’s Blog), including an international conference at the British Library on 7-8th June entitled ‘From Books to Bezoars‘.