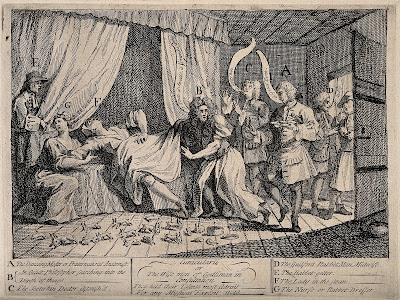 Cunicularii or the wise men of Godliman in consultation.
Etching by William Hogarth, 1726.
Wellcome Library no. 17342i

The story of Mary Toft (also called Tofts) has been told many times, but it is worth revisiting as it has many aspects, some of which tend to be neglected. For those new to it, here is a much simplified version. Mary Toft lived in Godalming in the Surrey countryside in the early 18th century, and was briefly a national celebrity for allegedly giving birth to rabbits. She was visited in Surrey by a number of people, some of whom tried to explain the event as it was alleged, while others disputed the claim itself, and others again were non-committal. She was brought to London for exhibition and interrogation, and confessed under pressure to have been complicit in a fraud suggested and activated by another woman, for which Mary was punished. The event was the media sensation of 1726-1727: like other short-lived events such as the Cock Lane Ghost in 1762, it was the subject of conversation, pamphlets and caricatures.

In her article on the event, Lisa Forman Cody discusses in detail the degree to which believers in the rabbit-births justified their position in identical terms to those used by their opponents: they used accredited standards of evidence, proof and deduction -– or what would later be thrown together as “science”. [1] When non-existent events are “explained” by exactly the same criteria as are used by experts, how is the public expected to distinguish between, on the one hand, the real scholars and, on the other, those who mimic them accurately but without having robust and relevant evidence in support? One might be reminded of the role of academics at the University of East Anglia in recent discussions about changes in the atmosphere and the real or imagined causes of those real or imagined changes.

Among the public comments on the Toft event, two caricatures featuring Mary were produced by William Hogarth (1697-1764): one of them is Cunicularii, dated 22 December 1726, and the other was at first called “Enthusiasm delineated” but later renamed Credulity, superstition and fanaticism. However, they deal with much larger matters than Mary Toft: she appears in them, but neither of the two prints is really about her. The prints need to be seen in their broader historical context, not merely as related to the Toft escapade, amusing though that is.

Lettering of the Cunicularii (click on image to enlarge)

At the door on the far right, marked D and described in the lettering as “The Guildford rabbet man midwife”, is another local: a surgeon and man-midwife from nearby Guildford, John Howard. He is rejecting the offer of a rabbit from a conspiratorial villager and saying “It’s too big”, implying complicity with the wily countrymen. 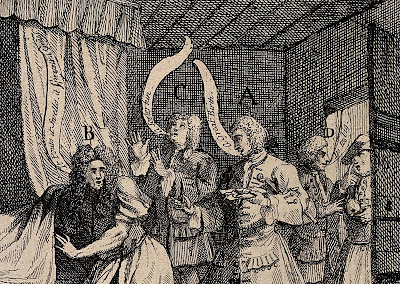 Detail of the Cunicularii (click on image to enlarge)

In the middle are three visitors from London, all marvelling at the prodigy. Nearest to Mary, a man-midwife is feeling under her garment and saying “It pouts it swells it spreads it comes”. Right of him is a man throwing up his hands in wonder and saying “A Sooterkin” (the “sooterkin” was a kind of animated afterbirth described in Netherlandish folkore). Further to right, the third visitor gestures towards the scene and exclaims joyfully “A great birth”.

Who are these visitors? They are identified in a brilliant article published by Dennis Todd in 1982. [2] Starting on the right, the lettering below the image describes this man as “The danceing master or præternatural anatomist”. This identifies him with Nathanael St André, a Swiss dilettante, dancing-master, amateur anatomist, and German-speaking courtier of George I: he was the chief believer in the genuineness of the rabbit-births. Moving leftwards, the man in the middle is described as “The sooterkin doctor astonish’d”: he is John Maubray, author of popular treatises on childbirth, and one of four doctors who attended Mary in London on 4 December 1726. The leftmost man of the three, the man-midwife, is saying “It pouts it swells it spreads it comes”; in the lettering, he is described as “An occult philosopher searching into the depth of things”. Todd identifies this figure as a hybrid of two people. The speech-bubble saying “It pouts it swells it spreads it comes”, identifies him as Sir Richard Manningham FRS, the man-midwife who suspected fraud but was misinterpreted at one point as suggesting that Toft was about to give birth to a rabbit. However the lettering “An occult philosopher searching into the depth of things” identifies him as another person who played a part in the episode: Samuel Molyneux FRS (1689-1728), an astronomer who was one of the courtiers sent by King George I to Surrey to examine Mary. Molyneux was a “virtuoso” (practitioner of arts and sciences) and another believer in the rabbit-births.

Hogarth draws a contrast between the rustic figures on the periphery who are perpetrating the fraud, and the three Londoners in the middle who are marvelling at it. The casual observer might get the impression that distinguished doctors travelled out to Godalming where they were all fooled by the locals. However, as Todd showed, this interpretion is mistaken. Firstly, of the people visiting, only one of the believers was a doctor (Maubray), and he had a vested interest in the idea of the sooterkin, because he had published his belief in such “molar conceptions” in his recent book The female physician (1724, pp. 364-366). The other doctor present, Manningham, was the arch-sceptic who forced Mary to confess, and there were other sceptical doctors whom Hogarth has chosen not to include in the print, such as George I’s surgeon Cyriacus Ahlers, who told the King it was a hoax; and James Douglas, a colleague of Manningham’s and describer of the Pouch of Douglas (an anatomical structure in women between the rectum and the uterus). 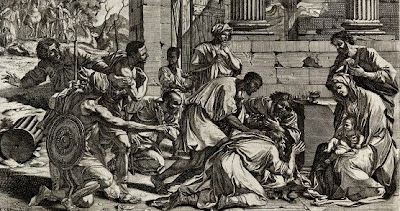 The adoration of the Magi. Detail of engraving after Nicolas Poussin.
Wellcome Library no. 24020i

Second, the reason why there are three visitors is to compare them with the three Magi attending the birth of Christ. In Hogarth’s print the visitors are shown marvelling at the miraculous birth not because they actually did so but in order to put them into the familiar composition of the Adoration of the Magi. The phrase “the wise men of Godliman” (i.e. Godalming) also suggests a comparison with the proverbial “Wise men of Gotham” (who were not wise but simpletons or feigned simpletons).

Hogarth’s ulterior purpose in telling the story of the rabbit-births in terms of Christ’s Nativity is to take the opportunity to satirise “Enthusiasm”, the religious fundamentalism of the time. Enthusiasm in this sense has been defined as “a state of (claimed) divine inspiration. The claimed inspiration is almost always seen by those who employ the term as delusory, and enthusiasm is almost always seen as bad, akin to fanaticism, irrationality, and madness“. [3] Though Quakers were often cited as typical Enthusiasts, another group tarred with that brush, strange though it may seem, was star-gazers: “the virtuoso astronomer by that time had become the stock representative of the Enthusiast” (Todd p. 43), a fact which explains why Hogarth gave the print its epigraph, consisting of a slightly altered quotation from Samuel Butler’s Hudibras describing the astrologer Sidrophel: “He held his talent most adroyt / For any mystical exploit”. Molyneux was an astronomer who accepted the rabbit-births.

So the real subject of Cunicularii is deluded Enthusiasm, which is ridiculed by being compared with the marvelling attitude of those who were deceived by the fraudulent prodigy reported at Godalming. (Let us recall that the other Hogarth print featuring Mary Toft was at first called “Enthusiasm delineated”.) The rabbit-woman case is simply a topical framing story used to introduce ridicule of Enthusiasts, or (in Alfred Hitchcock’s phrase) a “MacGuffin”.

Using medical lore and publicity as a metaphor for religious practice, Hogarth’s Cunicularii would be an ideal subject for a students’ seminar project in the field of media studies, science studies, gender studies, or history of medicine and science, as well as in more obvious fields such as English and art history. But to understand it in full requires input from all of these fields: to concentrate on one of them introduces an element of distortion. What might seem at first glance like a simple fraud turns out to have links with almost every discipline of the time and of today.