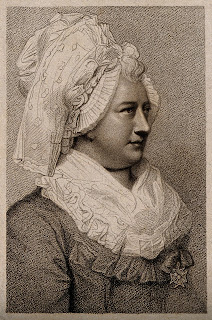 Spy: his cloak-and-dagger activity in a world of smoke and mirrors would have baffled George Smiley. He practised this trade in Russia, France and England.

Soldier: being trampled by a troop of cavalry in the Seven Years’ War may have left him unhinged, but he could still outwit the Prussians.

Person of two genders: the French government under Louis XVI insisted he wear female dress in compliance with his unreliable statement that he was a woman.

Blackmailer and whistleblower: having been employed by a secret branch of the French diplomatic service run by Louis XV to spy in London on the public branch run by Madame de Pompadour, he used his ownership of the secret papers to persuade the French government to pay off his debts; specifically, papers setting out plans for a French invasion of the British Isles.

Inventor and collector of secret remedies: his unpublished compilation of inventions and remedies resides in the Wellcome Library.

Fencer, entertainer, bibliophile, and more besides … 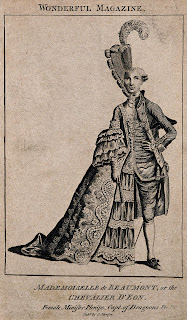 Top: mezzotint of the Chevalier D’Éon as a man, 1764, either by Victor Vispré or by his brother François Xavier Vispré, both Huguenot artists active in France, Ireland and England. Wellcome Library no. 274i

Above left: the Chevalier D’Éon as a woman. Engraving by R. Cooper after J. Condé, 1810. Wellcome Library no. 277i The stipple technique was considered appropriate for boudoir, sentimental and feminine subjects.

Below: the Chevalier D’Éon’s collection of inventions and remedies. Wellcome Library MS.2100. Click on image to enlarge. Note bottom right: “What is the most up-to-date book on English cuisine?” 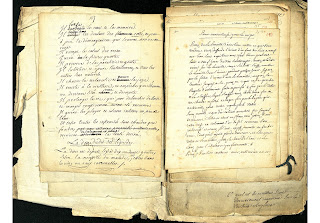