Item of the month, May 2010: Defying “Old graviation’s sway” 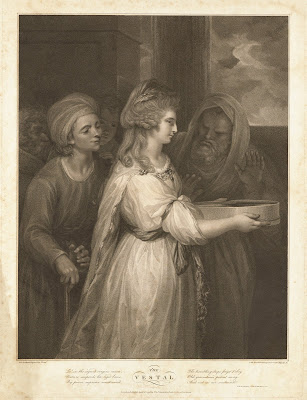 In Roman history, the keepers of the temple of Vesta were the Vestal Virgins, who play a part in many myths and stories. One such is the story of Tuccia, who, when her virginity was challenged, offered to prove it by carrying water from the Tiber to the temple in a sieve. The story became very well known in the Middle Ages, and also subsequently, owing to its inclusion in a book by Valerius Maximus (Factorum et dictorum memorabilium libri IX, or nine books of memorable deeds and sayings) which was used for centuries as a school textbook.

It was one of the stories used as a model by Sir Joshua Reynolds. Reynolds (1723-1792) was a specialist among portrait painters in posing his sitters in the guise of appropriate characters from history, myth, literature or antique art, and thus endowing his clients with the serenity of Apollo or the beauty of Venus. A visit to Kenwood House in Hampstead alone gives one a good idea of his method, for there one can see Reynolds’s portraits of Mrs Musters as Hebe, Kitty Fisher as Cleopatra, and Mrs Tollemache as Shakespeare’s Miranda.

Tuccia however is a special case. What kind of sitter would be most appropriately portrayed as a woman whose chastity had been impugned, and subsequently vindicated by an unlikely suspension of the laws of nature?

Unfortunately Reynolds’s painting of Tuccia has been lost since it was sold in New York in 1933, but its appearance is recorded in a large-format stipple engraving made in 1798 by Peltro William Tomkins (above). Comment on the picture in contemporary newspapers named the sitter as Mrs Seaforth, who appears several times in Reynolds’s business records for 1786. So who was Mrs Seaforth?

The first place to look for any information about Reynolds’s paintings is the magnificent two-volume catalogue by Dr David Mannings, published in 2000, with entries for the subject pictures by Martin Postle. [1] Although the Tuccia could be described as a portrait historié, it is catalogued not with the portraits but among the subject pictures. There the sitter is described as Rebecca Lyne, called Mrs Seaforth, mistress and child bride of the nabob Richard Barwell (1741-1804). “The reason for the intense interest in Mrs Seaforth centred on the issue of her age and the question of her virginity: she was fifteen when she became the second wife of the forty-seven year Barwell.” (Mannings and Postle no. 2171, p. 568). Barwell is described as a “nabob” because he had made his fortune in business in India.

However, the fine detail of this account is corrected by the Oxford dictionary of national biography, and by Mannings himself in his entry for another portrait of Mrs Seaforth in the Lady Lever Art Gallery, Port Sunlight (Mannings p. 408 no. 1595). From this it emerges that Barwell married as his second wife on 24 June 1785 Catherine (1769-1847), the daughter of Nathaniel Coffin from Boston, Massachusetts, and his wife, Elizabeth. Mrs Seaforth (Rebecca Lyne, who took the name of Seaforth) was the mistress of Barwell by whom she had three girls and a boy. So while Barwell did have a “child bride”, it was the sixteen-year old Catherine Coffin rather than his mistress Rebecca Seaforth, the latter being the model for Tuccia.

In comparing Rebecca to Tuccia, which part of the story did Reynolds intend us to take away: the impugnment of her chastity or her demonstration of it? Perhaps the social historian would first look at the client relationship between Reynolds and Richard Barwell (assuming the wealthy nabob was Reynolds’s real patron) and infer the latter interpretation: the painting proclaims her innocence. Surely Barwell would not have paid Reynolds a substantial fee to insinuate that Rebecca’s virtue was as implausible as the carrying of water in a sieve?

Detail of the lettering (click on image to enlarge)

This point of view is supported by the lettering on the print, which was added by the print publisher Thomas Macklin (who, as a dealer, was also the owner of the painting). Purporting to come from “Dr Gregory’s Ode to meditation“, the verses read:

Lo! In the injur’d virgin’s cause,
Nature suspends her rigid laws;
By power supreme constrain’d;

No other reference to this ode has been found, and it has been suggested that Macklin might have had the verses written to illustrate the message of the painting. That message would be that the law of gravity (“Old graviation’s potent sway”) was indeed suspended to aid “the injur’d virgin’s cause”. (“Graviation” is unknown to the Oxford English dictionary, but as the lettering is engraved by hand instead of being printed in movable type, it should not be a misprint for “gravitation”, both meaning gravity.)

However a different interpretation might be suggested by today’s literary and art historians, who, for reasons not relevant here, favour a hermeneutics of complexity, irony, and subversion. According to this argument, the vindication of Tuccia’s virtue is put forward as a subject in order to draw attention to the possibility of the opposite. Barwell and his girlfriend may have been pleased with the dignified portrayal, while the commentators would treat the portrait as a satirical representation of immorality, with Reynolds either subconsciously or covertly in the role of the satirist. While much favoured today, this kind of interpretation can often be over-sophisticated.

In this case however, perhaps surprisingly, the “ironic” interpretation was actually put forward at the time. The Swiss painter Henry Fuseli commented on the painting in the Analytical review in 1789, as follows:

It is not necessary to know that the Vestal is the portrait of Mrs B—ll, to discover the whole is an irony; the humid side-leer of this eye can as little issue from the face of chastity, as a vestal from such a mother -– but the picture itself –- as a composition of certain beauties, and certain character, its expression, tones and forms … never let us once remember that it ridicules what it pretends to celebrate. [2]

As Luisa Calè says in her book on Fuseli, the identification helps “less knowing viewers into the cult of celebrity that was such an important feature of Royal Academy exhibitions … recognition is essential to the insider joke about The Vestal‘s embodiment of chastity.” [3] Such multiple interpretations may be commoner than we might realize when we see what looks at first sight like a routine retelling of an ancient myth.