Above, four visitors who joined the nursing staff of The Middlesex in November 1966: left to right, Sally Carroll (Sally Sweeney), Helen Wynne-Griffith (Helen Sandover), Glen Couper (Glen Wright) and Carolyn Kerr (Carolyn Howe), on their reunion at the Wellcome Library on 20 April 2010.

Not only can visitors get to see the paintings from The Middlesex which in some cases they have not seen for many years: they can also bring us new information about the past history of the paintings and the hospital. 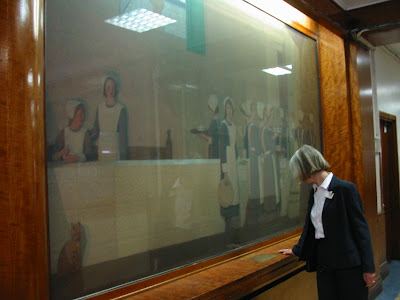 Here is a photograph showing the installation of one of the Cayley Robinson paintings in the entrance hall of The Middlesex Hospital. It is set behind a colossal sheet of plate glass in a massive architectural frame with a polished maple veneer. The same maple finish was used for other architectural woodwork in the entrance hall of the hospital. Helen Wynne-Griffith is looking at the brass plaque set into the frame: the plaque, recording the gift of the paintings by Edmund Davis, is now in the Wellcome Library. The grand boiserie inside the building responds in scale to equivalent features in the façade (see top photograph above).

In the dark 1930s interior, the glass and the frame set the pictures apart, cloaking the paintings’ deliberate mysteriousness with a further layer of remoteness. The current display in the Wellcome Library is the exact opposite: the paintings are exposed without glass on bright white walls, and are felt as physically present in the room. Both approaches have their rationales.

Above, the Acts of Mercy in the Wellcome Library, March 2010

We should be delighted to receive more visitors to see the Cayley Robinson paintings, but the paintings will be taken down when the Wellcome Library closes for its annual Closed Week on Monday 28 June 2010. They are being taken down in order to go on display in the Sunley Room of the National Gallery in a free exhibition (supported by the Wellcome Trust) from 14 July to 17 October 2010.

At the National Gallery other works by Cayley Robinson will also be shown alongside his Acts of Mercy, including Pastoral (1923-24, Tate), The Old Nurse (1926, The British Museum) and Self Portrait (1898, National Portrait Gallery, London). With Cayley Robinson’s modern works, National Gallery paintings by Piero della Francesca (The Baptism of Christ, 1450s), Sandro Botticelli (Four Scenes from the Early Life of Saint Zenobius, about 1500) and Pierre-Cécile Puvis de Chavannes (Summer, before 1873) will be shown. Cayley Robinson was a learned painter who spent four years as a fine art student in Paris and three years studying art in Tuscany, which accounts for the wide and unusual range of influences from Piero to Puvis which he absorbed and reconfigured in his own paintings.

New information about the paintings continues to arrive at the Wellcome Library: more in another posting.

The photographs of The Middlesex Hospital were kindly supplied by Sally Carroll.

18 comments on Remembering The Middlesex Hospital