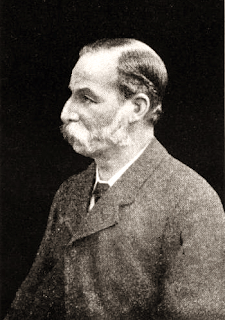 As the Royal Horticultural Society’s annual jamboree opens this week in Chelsea it is timely to remember the man who not only donated land at Wisley in Surrey in 1903 for the Society’s new national gardens, but also with his brother Daniel, an unassuming pharmacologist and amateur botanist from south London, played a vital role in the construction of the visual landscape of one of the world’s most characteristic pleasure grounds.

The role of the British in the creation of the French and Italian Riviera as health resort and tourist destination is well known. Celebrity visitors such as Edward VII and Winston Churchill, or residents like Somerset Maugham, jostle with the innumerable hotels Windsor and Bristol in the public perception of the pre-war Riviera as the playground of the English upper classes. Less well-known is the part played by altogether more sober Britons who, equally drawn south by the Riviera’s equable winter climate, devoted themselves not so much to fleshly pleasures and the gaming tables of Monte Carlo but to study, horticulture and good works.

One of these was – shown above – Sir Thomas Hanbury (1832-1907), a Quaker merchant in the China Trade, who was so entranced by the area round Menton when travelling on the Continent that in 1867 he bought a ruined palazzo and its extensive grounds at La Mortola on the Franco-Italian border with the aim of restoring it and constructing a botanical garden. In 1871 Hanbury and his wife settled at La Mortola permanently.

So began the Hanbury Gardens, the most famous botanical destination on the Riviera by the time of Hanbury’s death.

A visit should be paid to the late Sir Thomas Hanbury’s beautiful Botanic Garden and Saracenic Tower, an interesting restoration of a 9th century building, converted into a villa, situated at La Mortola, about 2 miles east from Garavan, open to the public Monday and Friday from noon to sunset. Admission 1 fr, for the benefit of local charities. The charming grounds of 100 acres slope down to the beach in terraces amidst orange and lemon tress and palms. A feature of the garden in the Pergola, a delightful walk covered with trellis work, up the supporting pillars of which climb a hundred varieties of creeping plants. The house is built in the Italian style on the site of an ancient Saracen castle, with white marble terraces and loggias, affording superb views of the Mediterranean. 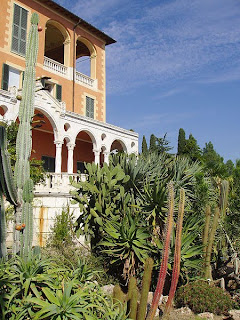 The Hanbury Gardens were not merely a pleasure garden however. From the first the project embodied an urge to investigate how foreign species acclimatized, with the subtext of learning more about the pharmacological qualities of exotic plants, as befitted the interests of a scion of the house of Allen & Hanburys, the pharmaceutical chemists.

In this Thomas was assisted by, or more properly left the greater part to his eldest brother Daniel (1825-1875), a pharmacologist whose primary research focus was on vegetable material medica. His principal method of investigation was via a world-wide correspondence, often with British merchants, consuls and other government officials overseas, who supplied Daniel Hanbury with information about the local flora, and sometimes seeds and other botanical specimens. This correspondence is preserved in the Wellcome Library, in Daniel’s series of copy letter and notebooks dating from 1858 to his death (MSS.5304, 8353-8367).

The correspondence and papers show that Daniel was a frequent visitor to La Mortola and was instrumental in introducing many exotic varieties to the garden, from the Americas, and especially Australia and South Africa, mainly from seed. An entry for May 1869 lists in detail the succulents growing on the various terraces at the villa (MS.8361, ff.42-43) – the gardens today are still noted for their agaves and aloes.

Elsewhere in the notebooks are lengthy inventories of seeds obtained from the botanic gardens in Cape Town and Adelaide, with notes on the success of planning at La Mortola. It is tantalizing to speculate not only how many of the present occupants of the Hanbury Gardens, but also the denizens of more homely villa gardens all along the Riviera, owe their existence to these packages of seeds transported half way round the world to Daniel’s house in Clapham and then forwarded or carried by him by rail to Menton.