The papers of Sir John Vane are now available for consultation in the Wellcome Library(PP/JRV). 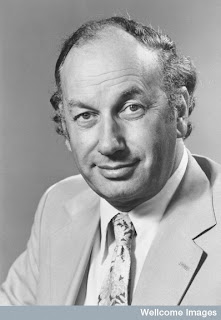 Sir John Robert Vane (1927-2004) was an eminent pharmacologist, who published over 900 scientific papers, was joint editor of 20 books, and received over 50 awards and medals, including Honorary Fellowship of the Royal College of Physicians. He is perhaps best known for his work in helping to solve one of science’s longest running puzzles, how aspirin worked, for which he shared the Nobel Prize for medicine in 1982. Is it a reflection on society’s view of scientists that Sir John Vane’s Wikipedia entry is so short? It reads as follows:

Sir John Robert Vane (29 March 1927 – 19 November 2004) was an English pharmacologist, born in Tardebigg, Worcestershire. His father was the son of immigrants from Russia and his mother came from a Worcestershire farming family. He was educated at King Edward’s School in Edgbaston, Birmingham, and studied Chemistry at the University of Birmingham in 1944. Vane completed a doctorate in pharmacology from the University of Oxford in 1953. He held a post at the Institute of Basic Medical Sciences of the University of London in the Royal College of Surgeons of England for 18 years. During that time he developed certain bioassay techniques that led to important scientific discoveries. He won a Nobel Prize in Physiology or Medicine in 1982 for his work on aspirin in which he discovered it inhibited prostaglandin biosynthesis. In 1973, Vane left academia and took up the position of director of research of the Wellcome Foundation. He was knighted in 1984. In 1985 he returned to academic life at the William Harvey Research Institute at the Medical College of St Bartholomew’s Hospital (now Barts and The London School of Medicine and Dentistry). He died on November 19, 2004 in Princess Royal Hospital, Kent from long-term complications arising from leg and hip fractures he sustained in May of that year.

For a much better reflection of his full contribution to the field of Pharmacology, there is an excellent entry in the Oxford Dictionary of National Biography, Oxford University Press, 2004. Other biographies and obituaries can be found in The British Medical Journal, vol.329 no.7479, p.1406, 11 December 2004; The Times, 25 November 2004; and Prostaglandins & Other Lipid Mediators, vol.78, December 2005.

Sir John’s papers, newly catalogued and now available in the online catalogue of Archives and manuscripts, cover primarily the period of his life from his University days in the 1940’s and 1950’s at Birmingham, Oxford and Yale up to the end of his time at the Royal College of Surgeons in the early 1970s.

Vane graduated with a BSc in Chemistry from Birmingham in 1946. He was not particularly enamoured with the actual practice of chemistry and when he learned that Harold Burn in Oxford was seeking graduates to be trained in pharmacology, he took the opportunity to pursue this field. Vane graduated with a BSc in pharmacology at Oxford in 1949 then spent a year as a researcher in the pharmacology department at Sheffield University. In 1953 Vane was awarded a D.Phil. from Oxford. As was typical at that time for newly qualified postdoctoral scientists Vane chose to gain experience in the USA, and he joined the department of pharmacology at Yale as an assistant professor. The papers in this collection, held from his time in academia, include his notebooks, lecture notes and course papers and perhaps most interestingly his experiment results notebooks from both Oxford and Yale. These notebooks not only give an insight into the direction of his scientific interests but also shed light on the importance and development of animal experimentation in medical science at the time. Full details of the methodology and results of his experiments are included in the notebooks. 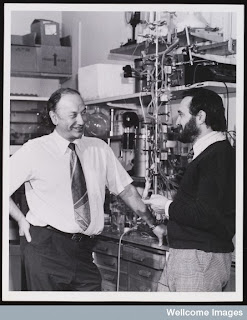 In 1955, Vane returned to the UK and joined W. D. M. (Bill) Paton’s department of pharmacology at the Institute of Basic Medical Sciences, originally sited in Queen’s Square in London, but subsequently relocated to the Royal College of Surgeons in Lincoln’s Inn Fields. Vane rose quickly through the academic hierarchy, becoming a reader in 1961 and gaining a personal chair in 1966. The bulk of the collection papers originate from this time at the Royal College of Surgeons and include further experimental notebooks, numerous photographs of the experiment results (chemical outputs) and graphs. In addition there is an extensive collection of Vane’s published papers from the 1960s and early 1970s, most produced in collaboration with other pharmacologists, most including drafts with extensive annotation, which give an insight into Vane’s thought processes.

1973 saw a change in Vane’s circumstances, with the break-up of the Royal College of Surgeons group and Vane was offered the position of group research and development director of the Wellcome Foundation. Vane went on to publish many more papers but the published papers in this collection cease at this point.

There are few of Vane’s personal papers amongst the documents, and the personal correspondence that does exist relates mainly to correspondence from the 1970s in relation to the British Pharmacological Society. Vane had been the General Secretary of the B.P.S in the early 1970s and he maintained a close relationship with some of its officers after he had stepped down. These papers do give some insight into the character of Vane, but given that the majority of the letters are those received by Vane rather than copies of letters sent by him, they perhaps give a better insight into the thoughts of his friends and colleagues at the B.P.S. rather than his own.

The illustrations both show Vane; in the lower he is in a Wellcome Foundation laboratory.