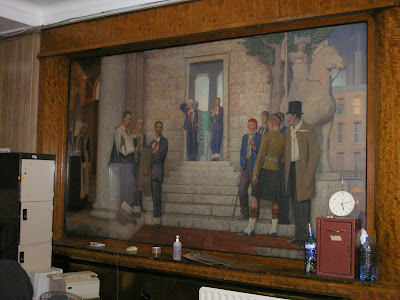 The above photograph of one of the four Acts of Mercy paintings by Frederick Cayley Robinson, now in the Wellcome Library, was taken in the Middlesex Hospital in 2006 by Dr Jeffrey S. Reznick. Dr Reznick is Deputy Chief of the History of Medicine Division of the US National Library of Medicine, and author of two studies of the disabled soldiers of World War I. [1] The Cayley Robinson painting was painted in 1920, when the effects of the Great War remained prevalent.

While at the Middlesex Hospital, the pictures were well protected by glass, but the photograph recalls Nicholas Penny’s description in 2003 of the “entrance hall of London’s Middlesex Hospital, where the four large canvases of The Acts of Mercy by the now almost forgotten Frederick Cayley Robinson are preserved beside the usual brash modern signage”. [2] By 2006 the painting served as one side of an improvised office, with the frame acting as mousemat and ledge for water bottles and a key-safe! 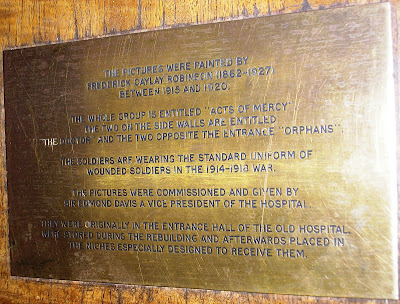 Laid into the architectural frame was this brass plaque, which includes the statement “The soldiers are wearing the standard uniform of wounded soldiers in the 1914-1918 War”. A seemingly bland statement, but by asking what exactly what that “standard uniform” was, Dr Reznick has revealed significant details not readily comprehensible without knowledge of the history of the time. His discoveries will be set out in a posting on this blog next week.

[1] John Galsworthy and disabled soldiers of the Great War (2009) and Healing the Nation: soldiers and the culture of caregiving in Britain during the Great War (2005), both of which appear in the Cultural History of Modern War series of Manchester University Press.