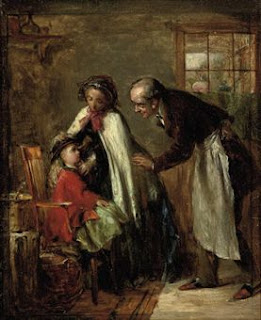 Occasionally things like this happen. Christie’s South Kensington are having a sale on 30 June 2010 of Victorian and British Impressionist art (mostly paintings and drawings). Lot 159 (see image on left from the sale catalogue) is a small oil painting on wood (17.8 x 14.6 cm., about two-thirds the size of an A4 sheet). It shows a little girl about to have a tooth removed by a dental surgeon who is concealing the dental pincers behind his back for fear of alarming her. It seems unnecessarily melodramatic, as, given her age, her milk teeth would surely come out anyway, but perhaps she is being given a foretaste of adult dentistry? Christie’s have given the painting a “title”, which is This won’t hurt a bit!, though they don’t say whether this was a title that they made up (as often happens) or one given by the artist.

Who was the artist? Well, Christie’s say the painting is by Thomas Webster RA (1800-1886), and is signed and (indistinctly) dated “T Webster/1835”. Thomas Webster is a famous and much-loved painter, a member of the Cranbrook colony of painters in Kent, and a specialist in genre paintings showing children in relation to adults. If this were a finished painting by him, it would be a valuable commodity, but as it is a small sketch, Christie’s have published an estimate of only £800-1,200 for it. 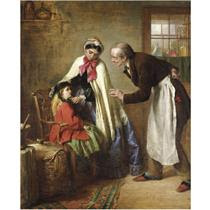 However, a finished and large-scale painting of the same composition does exist: it was offered for sale by the rival firm of Sotheby’s in the sale which they organized in 2008 of the collection of Victorian paintings built up by the Foreign Office official Sir David Scott. (The sale was mentioned in an earlier posting on this blog.) In that memorable sale of 19 November 2008, lot 118 was a painting on canvas (61 x 51 cm., or larger than A2), signed and dated “Edward Hughes/1866” (illustration right, from Sotheby’s catalogue). It sold for £11,875 including the buyer’s premium. Hughes, who was born in 1832 and died in 1908, was a High Victorian painter of the generation after Webster. Apart from portrait-painting, which was his bread-and-butter job, his specialty was painting pictures of the misfortunes of the working classes: Sotheby’s cited pictures given the titles “Ruinous prices”, “Lone and weary” and “Sorrowful tidings”. The dental scene would fit into his oeuvre through its class-based subject matter: the little girl and her mother are expensively dressed, but they have come for the operation to a grubby lower-middle class establishment, where the aproned manual operator is concerned not to upset them.

So what is going on here: was the Sotheby’s version a copy by Hughes of an earlier painting by Webster? If so, one would have expected Hughes to have signed it “Edward Hughes after T. Webster” (such signatures acknowledging earlier artists do exist). Or is the Christie’s picture a copy by Webster after Hughes? 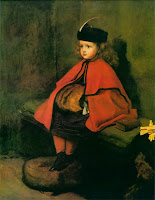 That seems improbable as Webster was the senior man, and the date in the Webster inscription would be impossible, as in 1835 Edward Hughes was a little boy younger than the little girl in the painting (but remember that Christie’s say the date is indistinct). The costume looks to this writer more characteristic of 1866 than of 1835, and will remind some people of John Everett Millais’s My first sermon of 1863 (illustration left: Guildhall Art Gallery, City of London). That would suggest a Hughes composition.

The deeper story has yet to be unravelled, but if I were thinking of buying the Christie’s painting on 30 June, I would look very closely at that Webster signature to see whether the signature might have been added to an unsigned picture. That would normally warrant the catalogue statement “Bears signature” rather than “Signed”. Added signatures of famous artists are not uncommon: on the same day as the Christie’s auction, the National Gallery in London opens its exhibition Close Examination: Fakes, Mistakes and Discoveries (30 June-12 September 2010, admission free), where an array of similar “modifications” will be on display. 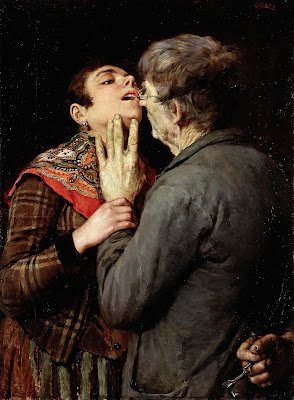 Oil painting by Luciano Nezzo. Wellcome Library no. 44610i

As the Hughes/Webster composition shows, the surgeon’s bedside manner when dealing with impressionable and vulnerable patients offers wonderful opportunities for a skilful narrative painter, and indeed the Wellcome Library has such a painting by Luciano Nezzo (b. 1856). Here it is not a child but a young woman who is facing the terror of a tooth-extraction. Unlike dealers and auction houses, we do not purport to give titles to paintings, drawings etc., but try to interpret the subject through a description in the catalogue record: in the Wellcome Library catalogue the reader will therefore find an attempt to analyse the various polarities that the artist has set out in the painting. This dramatic painting by an Italian artist of the generation after Hughes makes an interesting contrast with the works of the earlier English genre painter. Nezzo’s works are rare, but this painting is signed — and no reason has been adduced for doubting its authenticity.