Francis Crick and the discovery of DNA 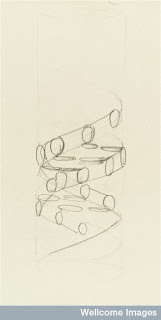 The Wellcome Library can be proud today as keeper of the archive of Francis Crick. A recent poll has found that Crick’s 1953 discovery of the double-helix structure of DNA along with his Cambridge University colleague, James Watson, has come top in a vote for the most important scientific breakthrough made by academics at British universities (see Press Association article). Their groundbreaking research first appeared in Nature on April 25th 1953. Celebrities though they are, Crick and Watson’s discovery was the tip of the iceberg in a 100 year period of genetic research. It is easy to forget the groundwork research that was provided by the likes of Friedrich Miescher (for his identification of nucleic acids in 1869), Phoebus Levene (who characterized the different forms of nucleic acid in 1910) and Erwin Chargaff (for his discovery of the two rules that helped lead to the double-helix structure in 1952).

Also perhaps not widely known was the role of Crick’s wife, Odile in the genetic sensation. The original drawing of the double-helix structure, the genetic code for all life, that illustrated the 1953 Nature article was produced by Odile, an established artist in her own right. Variations of this design can be found within the Crick archive. A visual representation of Watson and Crick’s model was crucial to show how the components of DNA fit together in a double helix. Though abstract in design, the drawing has since been hailed as accurate and now, the most famous drawing in the 20th century in that it “defines modern biology” (Sejnowski in Washington Post article). Francis claimed he and Watson were scientists, not draughtsmen so it naturally fell to his wife to illustrate their discovery.

Though Crick’s assocation with the double-helix ceases to pale in insignificance, the archive also contains material from many of this other research projects, notably his work on consciousness which preoccupied him from the 1970’s. Cataloguing of this large archive still continues. For further details on other content, see Francis Crick – new papers available for study.

Digitisation of the Crick archive is currently in process and part of a wider ‘Modern Genetics and its Foundations Project’ which began early this year. To date, around 1/3rd of the Crick archive (which amounts to almost 300 boxes of material) has been prepared for photography which is now underway. Availability of the archive can be viewed on the Project Progress pages. Completion of the project is predicted to be in Autumn 2011 and the digitised content will be accessible via the Library catalogue, the Archives and Manuscripts catalogue in 2012 although around 65 images are already available to view online via Wellcome Images.