Today is the 130th anniversary of the birth of Helen Keller, the American author and activist. We could write an ‘Item of the Month’ post on the holdings in the Wellcome Library on this fascinating woman, but have decided to focus on a lesser-known figure who aimed to transform the lives of people with visual impairments. 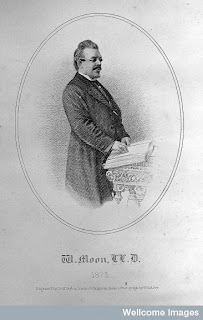 William Moon (1818-1894) may not be a household name now, but during his lifetime he was recognised as the creator of the first widely-used practical reading alphabet for the blind.

Moon grew up in Kent, but by the time he was 22 he had become totally blind (the after-effects of contracting scarlet fever as a child) and moved to Brighton, to live with his sister and widowed mother.

There, he set up his own day school for blind children and taught his pupils how to read using existing embossed reading codes. However, due to the boys finding it difficult to use these systems, in the 1840s Moon devised his own, which became known as Moon Type.

Moon Type uses embossed lines and curves – similar to print – to create nine basic shapes. Rotating or reflecting these shapes in different positions creates the 26 letters of the Roman alphabet and the basis for providing a tactile version of any text. 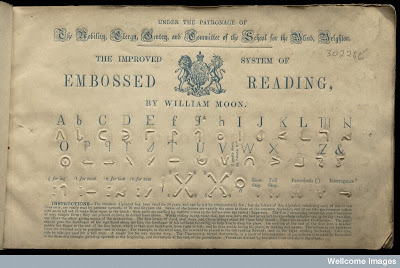 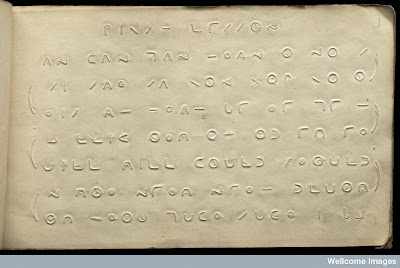 (First page of embossed text from William Moon’s An Elementary Reading Book, 1860. How well can you read it?)

Moon Type was the first widely-used practical reading alphabet for the blind in this country. Moon published his new system in 1845 16 years after Louis Braille had invented his system. However, Braille had yet to cross over the channel, and Moon Type was well established before Braille was taken up in Britain.

Understandably, demand for materials in Moon Type was high and William Moon began on an energetic campaign of printing pamphlets and travelling the country setting up Moon Type printing presses. A man of strong faith, by 1860 Moon was printing chapters of the Bible but his dream of producing all the books of the Old and New Testaments in Moon Type never came to fruition in his lifetime. The large type – and therefore, need for large, one-sided pages – made for bulky and heavy volumes. 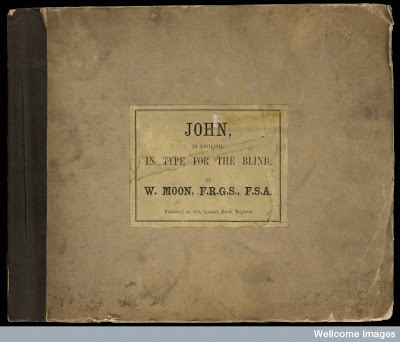 (Book of John, in Type for the Blind).

However, Moon expanded his system into other languages: using his original nine basic shapes, by the time of his death in 1894, he had embossed the Lord’s Prayer or another portion of scripture into 476 languages or dialects. He moved into less liturgical works, printing some scientific treatises and selections from authors such as Shakespeare, Scott and Burns and devised Pictures for the Blind, which taught blind people by touch the form and shape of common objects.

Although William Moon’s system has been subsequently replaced in popularity – and recognition – by Louis Braille’s system, Moon Type is still used by people who have difficulty reading Braille, and has been found to be suitable for people who have lost their sight after learning to read.

Moon’s achievements were recognised during his lifetime, with elections to the fellowships of both the Royal Geographical Society (1852) and the Royal Society of Arts (1857) and the award of an honorary degree by the University of Philadelphia in 1871.

More details on Moon Type is available from the website of the Royal National Institue for Blind People (RNIB). And also thanks to this blog post, which inspired us to choose Moon’s works held in the Wellcome Library for this Item of the Month post.