The ‘Convalescent Blues’ in Frederick Cayley Robinson’s ‘Acts of Mercy’ The four paintings of the Acts of Mercy by Frederick Cayley Robinson, now in the Wellcome Library, were painted between 1915 and 1920.

Cayley Robinson derived his subjects from a variety of sources. A brass plaque formerly set into the frame of one of the paintings (fig. 2, right), said “The soldiers are wearing the standard uniform of wounded soldiers in the 1914-18 War”. As is plainly evident upon viewing the painting The doctor I (detail above), one of the most prominent of these sources was the distinctive blue uniform that military authorities required recovering soldiers of the Great War to wear in hospital and in public, which popularly became known as ‘Convalescent Blues‘. [1]

Made of a flannel and flannelette combination, the convalescent soldier’s outfit and its lounge-jacket counterpart resembled ill-fitting pyjamas. [2] The uniform was designed so that a handful of sizes would fit all recovering soldiers of ‘other ranks’. Such standardisation of the convalescent blue outfit made it fit poorly, requiring soldiers to ‘flap’ or ‘cuff’ their trouser legs and shirt sleeves. The entire ensemble included a red four-in-hand necktie and was the only item of hospital clothing issued exclusively by the government during the war. [3] While military authorities required that the garment be worn at all times by soldiers of non-officer ‘other ranks’ who were receiving treatment in military hospitals and convalescent facilities, authorities exempted officers from wearing the ‘Blues’, providing them instead with a white armband decorated with a red King’s Crown, with a personal clothing allowance, or with fancy silk pyjamas donated by the public and voluntary-aid agencies. [4] 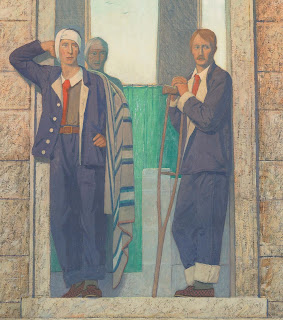 As a material artefact of the Great War, the ‘Convalescent Blue’ outfit (fig. 3, left) served a number of specific functions. Above all it was a means of establishing and maintaining cleanliness in military hospitals, where soldiers usually arrived in dirty, worn-out and infested uniforms and ‘great coats’ that required sterilization and thorough disinfection. [5] The outfit also served to help improve administrative efficiency within the hospital environment. At convalescent facilities, the administration of soldier-patients involved strict division into four sections, each distinguished by combinations of the hospital-blue uniform and different-coloured armlets. The ‘worst cases’ wore hospital-blue with white armlets. Cases well enough for one to six months of retraining wore blue with pink armlets. Section three, including ranks who required less than one month of retraining, wore blue with light blue armlets. Finally, section four included men in blue with dark blue armlets who were ‘practically well’. [6] This medical organization by sartorial marking expedited the process of convalescent medical examinations, helping divisional medical officers to monitor and sort their sections during weekly inspections when men were either ‘moved up’ or ‘put back from Section to Section as [their] condition indicates’. [7]

The ‘blues’ also reflected authorities’ expectations of potential insubordination among recovering ranks. In essential ways, being ‘fully clothed’ in blue served as a means of maintaining discipline and order inside and outside institutional confines. [8] This official linkage of soldier-patient behaviour to sartorial requirements was evident in all military hospitals. Inside, the outfit helped authorities to distinguish soldier-patients from doctors, nurses, orderlies and visitors. Moreover, in facilities set aside specifically for disabled cases, the blue outfit helped to promote good behaviour. For example, at Shepherd’s Bush, Britain’s flagship orthopaedic hospital, authorities used these sartorial requirements to encourage voluntary unpaid work in the institution’s so-called curative shops. If patients participated in these official work programs, they could receive privileges such as ‘permission to wear khaki instead of the hospital blue or grey’ or ‘more frequent passes out of the hospital, etc’. [9]

The lack of pockets in the convalescent blue uniform was a feature that fitted with economy, as it saved on fabric, and with disciplinary arrangements, especially the rule that soldiers were not allowed to hold money while in hospital. Significantly, too, this measure reflected a contemporary trend in civilian wear that ‘one of the great differences between garments for gentlemen and ladies is that, in the former, pockets abound, whereas in the latter they are absent’. Women’s clothes did not require pockets because women carried their personal belongings in purses. Men’s lounge suits on the other hand always included an inner or outer ‘ticket pocket’ for carrying money and theatre tickets. [10] 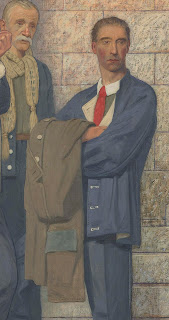 Soldiers’ hospital wear overlooked this difference between women’s and men’s clothing. In hospital, soldiers were supposedly provided with both sustenance and leisure, so they did not need pockets for money or tickets. Evidence suggests that convalescents themselves were acutely aware of this feature of their mandated outfits. [11] So, too, was Frederick Cayley Robinson. Look carefully at The Doctor and you will see what appears to be a blue pocket sewn onto a soldier’s brown great coat (fig. 4, left). Cayley Robinson’s inclusion of this detail – arguably too his obvious juxtaposition of the colours – suggests that he understood the lack of dignity conveyed by the Convalescent Blue outfit, and the empowerment that came with the possession of a pocket by a blue-clad soldier.

Finally, the Blues served an important propagandistic function during the war, helping to put the wounded Tommy on public display and to facilitate public appreciation of his service to King and Country. A contemporary picture postcard by Frederick Spurgin celebrated the Blues in the context of the colours of the Union Jack (fig. 5, left). Here the Convalescent Blue is praised along with the beautiful nurse (in white) and the always-revered Chelsea pensioner (in red).

However, other evidence of the day helps to reveal that perceptions of the Blues – by convalescent soldiers and by the public – were far from straightforward. The postcard artist Douglas Tempest suggested how the uniform helped to draw the attention of young women (fig. 7, left), while R.W. Stoddart depicted the Blues with exaggerated realism (fig. 8, right).

Donald McGill (fig. 9, below left) conveyed how men wearing uniform were the target of thoughtless questions asked by members of the public who had no experience of the war as it played out at the front.

Soldiers themselves also held negative views of the Blues, suggesting in hospital-magazine sketches that this standard clothing failed in large measure to confer a deserved dignity of appearance, compared with proper, upper-class masculine ‘fashion’ of the day (fig 10, right).

These latter examples suggest that the heroes depicted in figures 5 and 6 became comic in the spirit of music hall. Unlike a proper suit, figures 7-10 combine to suggest, the blue uniform prompted from observers laughter and ridicule, which undercut the masculinity of men who had served King and Country. Such different perspectives on the Blues help to reveals how this sartortial requirement forced an unstable public identity for convalescent soldiers.

During the Great War, therefore, as women donned uniforms that represented their unprecedented independence, wounded soldiers wore uniforms that simultaneously reinforced and subverted their masculinity. The public saw men dressed in Convalescent Blues as heroes, much in the same way they praised khaki-clad soldiers. But from the perspective of convalescent men themselves, the Blues fell far short of conferring a dignity of appearance commensurate with their service to King and Country.

In creating his Acts of Mercy Frederick Cayley Robinson evidently found inspiration in the iconic and complex figure of the blue-clad soldier. Revealing this perspective opens a new window on Cayley Robinson’s work. It also makes the 2010 exhibition of his Acts of Mercy at the National Gallery (14 June-17 October) especially significant for all who are interested in the history of the Great War and its fast-approaching centenary anniversary.

Author: Dr Jeffrey S. Reznick, Deputy Chief of the History of Medicine Division of the US National Library of Medicine. During the autumn of 2006, Dr. Reznick had the privilege of studying Frederick Cayley Robinson’s Acts of Mercy in situ at the Middlesex Hospital before they were acquired by the Wellcome Library.

Every effort has been made to trace copyright holders of images reproduced here which are held in private collections. Should holders step forward following publication of this blog post, due acknowledgement will gladly be made. Dr. Reznick may be reached at jeffrey.reznick@nih.gov

[1] See Jeffrey S. Reznick, Healing the nation: soldiers and the culture of caregiving in Britain during the Great War (Manchester: Manchester University Press, 2005) for a comprehensive study of the convalescent blue outfit and how it was at once of a piece with the broader history of hospitals, workhouses, prisons and schools, where standard clothing was the norm to ensure personal and communal hygiene as well as institutional discipline and order.
[2] This description is compiled from Hansard Parliamentary Debates, Commons. vol. 86 (1916), cols. 970-971; from first-hand examination of the hospital-blue uniform on display in the First World War Exhibit (case 16, item 29), Imperial War Museum; and from ‘Convalescent Jacket’, Tailor and cutter (20 August 1914) (supplement): 688-690, which also contains the Army Council’s special ‘sealed pattern’ (also called a ‘specimen garments’) for the ‘Convalescent Jacket’. Such patterns were made for all branches of the armed forces.
[3] The ‘four-in-hand’ was one of the four most popular types of necktie worn in Britain between 1900 and 1925. Red was a popular colour of necktie between 1900 and 1914, and this fact could account for why authorities chose it as the colour of the convalescent’s necktie. See Alan Mansfield and Phillis Cunnington, Handbook of English costume in the twentieth century, 1900-1950 (Boston: Plays, Inc., 1973), 273-274. The only part of the blue ensemble not mandated by authorities was the hat, which, as it signified individual rank, nationality, and regiment, could be the soldier-patient’s own.
[4] See Brian Abel-Amith, The hospitals, 1800-1948: a study in the social administration in England and Wales (London: Heinemann, 1964), 275. For a vivid account of the fancy pajamas often worn by officers see Lyn McDonald, The roses of no man’s land (New York: Penguin Books, 1993), 39. Discharged soldiers who were no longer receiving care in military hospitals did not wear hospital blue but ‘their own clothes’. See Charity Organisation Society, ‘The Star and Garter Home for Disabled Discharged Soldiers, Commanding Officer’s Report (interview with the Matron of the hospital) 27 August 1919’, TD, (A/FWA/C/D), London Metropolitan Archives.
[5] ‘Clothing, dental treatment, and railway passes’, Hospital (20 March 1915): 555. See also E.P. Cathcart, Elementary physiology in its relation to hygiene, Army Medical Department (London: HMSO, 1919), 13-14.
[6] ‘Arrangements for the Reception and Treatment of Sick and Wounded in Hospitals in the United Kingdom during the Great War’, appendix VI to ‘The King’s Lancashire Military Convalescent Hospital in Blackpool: The King’s System and Details of Physical Training’, TD (1918 ?), n.p., PRO (WO 222/1).
[7] Ibid. [8] Ibid.
[9] Reports by the Joint War Committee and the Joint War Finance Committee of the British Red Cross Society and the Order of St. John of Jerusalem in England on voluntary aid rendered to the sick and wounded at home and abroad and to British prisoners of war, 19141919, with Appendices (London: HMSO, 1921), 253.
[10] ‘Pockets’, Tailor and cutter (25 March 1915): 211.
[11] Reznick, Healing the nation, especially chapter 5.