William Harvey in the market-place 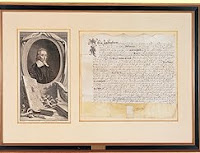 One of the pleasures of the London summer fairs is their unpredictability. Who would have expected to find at the London International Fine Art Fair at Olympia (4-13 June 2010) a document signed by William Harvey the anatomist (1578-1657)? Offered by the 19th Century Rare Book and Photograph Shop of Brooklyn, it was a legal document concerning the ownership of some property at Buckholt near Canterbury, and formed an agreement between Harvey (described as “William Harvye of London Doctor of Physicke”) and George Abbott, the then Archbishop of Canterbury. In his signature Harvey appears to spell his name with an e instead of an a. The shop is asking $24,000 or £16,000 for it.

That price testifies to Harvey’s reputation. If it seems expensive, the same dealer was also offering a set of the very rare carbon prints from 1873 — only half a dozen or so copies exist –- of Foochow and the River Min by John Thomson, for $500,000. Unfortunately the photographs had been remounted and framed separately, so no longer have their original integrity as a portfolio or album. The original negatives of them are in the Wellcome Library, and scans of them could until recently be seen for free on the Wellcome Library’s website: it is hoped the scans will soon return. 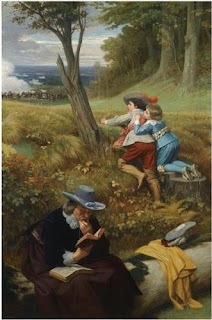 William Harvey also appears in the market this summer with a high price-tag in Sotheby’s sale of Victorian and Edwardian Art in London on 13 July 2010, where he is portrayed in a painting by William Frederick Yeames (lot 97: left,from Sotheby’s catalogue). Yeames is famous for one picture, entitled “And when did you last see your father?” (1878: Walker Art Gallery, Liverpool), showing a Royalist boy being interrogated by his Parliamentarian captors (below). The earlier Harvey painting (1871) is also an English Civil War scene, but as it has been in private hands, is far less well-known.

It shows an episode in the battle of Edgehill in Warwickshire, on 23 October 1642, when (according to what John Aubrey says Harvey told him) Harvey was deputed to look after the 12-year old Prince of Wales and the 9-year old Duke of York (in later years respectively King Charles II and King James II).
In Aubrey’s words,

When the king Charles I, by reason of the Tumults, left London, he [Harvey] attended him, and was at the fight of Edge-hill with him; & during the fight, the Prince [of Wales] and D[uke] of York were committed to his care: he told me that he withdrew with them under a hedge, & tooke out of his pockett a booke and read; but he had not read very long before a Bullet of a great Gun grazed on the ground neare them, which made him remove his station. [1]

Geoffrey Keynes commented in his life of Harvey “It is not surprising that he should read a book during the tedious hours of waiting from eight in the morning until after two o’clock in the afternoon when at last the battle was joined”. [2] Keynes was himself a bibliophile who had been at the front in World War I as a surgeon involved in blood-tranfusion, and must have experienced such tedium for himself. In the painting Harvey actually has two books open: comparing Aristotle and Fabricius on generation, the subject of his next book, perhaps?

The painting is rich in tree-symbolism. Harvey sits on the trunk of a felled oak, and the younger prince kneels on its stump, representing the block on which their father’s head would roll. The princes clamber towards a tree whose trunk divides into three branches. One branch has been sliced off, again representing the execution of Charles I. The middle branch grows strongly, representing the golden days of Good King Charles, Charles II. The right hand branch grows weakly, representing the unfortunate reign of James II, which ended in his expulsion in 1688.

Although Sotheby’s do not mention the fact in the catalogue, the painting had been published by the physician John W. Ogle in his rambling Harveian Oration at the Royal College of Physicians on 25 June 1880. [3] Ogle reproduced as his frontispiece a photograph of the Yeames painting by Henry Dixon, best remembered for Bool & Dixon’s work for the Society for Photographing Relics of Old London (1875–1886: on exhibition until today at the Royal Academy). Ogle says only (p. 68) “The event is very pleasingly depicted by my friend W. Yeames, Esq., R.A., in his picture exhibited at the Royal Academy in 1871”.

Although Yeames was born and brought up in Odessa (as son of the British consul there) and died in Teignmouth in Devon, where he lived in later life, at this time he was living in a small colony of artists in St John’s Wood in London. Ogle, after a spell as physician at St George’s Hospital (then at Hyde Park Corner, in what is now The Lanesborough hotel) enjoyed an extensive practice as a Mayfair physician. [4] Could Yeames have been one of his patients? Was it Ogle who suggested the subject to Yeames?

Yeames’s painting of Harvey at Edgehill is tall and narrow (166 x 115 cm), and perhaps not such an attractive shape as “And when did you last…” (103 x 251.5 cm): horizontal format is usually more suited to narrative subjects. Even so, Sotheby’s have put an estimate of £80,000-120,000 on the Harvey painting. If the purchaser has plenty of cash and a suitable tall and narrow place in which to hang the picture, why not add the Buckholt document to it? The latter is framed with an engraving of Harvey to the width of a predella panel suitable to hang below the painting — provided of course that it is protected from sunlight.