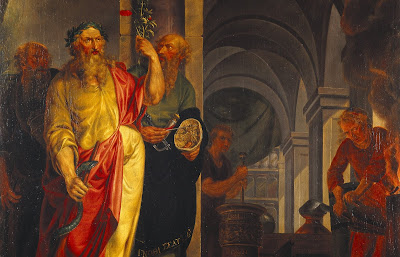 The online journal Museum practice often publishes useful case-studies for curators on such subjects as exhibitions, lighting, conservation, and cultural politics, but it was a surprise to read in an article from 15 July 2010 that “the Henry Wellcome collection has not been added to for around 75 years“. 75 years would take us back to 1935, presumably meaning around the time of Sir Henry Wellcome’s death in 1936. If the author means that Henry S. Wellcome’s personal collection has not been added to since his death, how could anyone add to that except the man himself? But if it refers to those collections which Wellcome created and left to posterity, and which are named after him today — of which the Wellcome Library is one — then, well … we must not believe everything we read in the press, even the quality professional press.

There are in fact dedicated web-pages on the Wellcome Library’s website devoted to “Newly available items”, of which all but the section headed “Retrospective cataloguing” actually 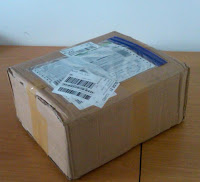 consists of new additions to this part of “the Henry Wellcome collection”. They record the steady stream of carefully selected items arriving in packages and cardboard boxes and tubes in Wellcome Library offices. The page devoted to iconographic documents such as prints, paintings, photographs and drawings lists the last three months’ additions: at the time of writing there are fifty items on that page alone, and that’s certainly not from the most prolific department. On that page the items acquired range in date from around 1700 to 2010, and come from Italy, Germany, Austria, France, Bangladesh and the UK. 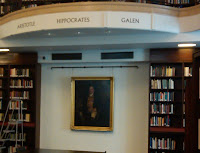 Two items acquired in the last decade deserve special attention just now, because at the beginning of July 2010 they were put on permanent public display in the Wellcome Library for the first time — not perpetual display, but continuous display for a few years. One (left) has already been mentioned in a posting on this blog: the portrait of Benjamin Jesty, the first vaccinator, which the Wellcome Library repatriated from South Africa where it had been preserved for many years by Jesty’s descendants. 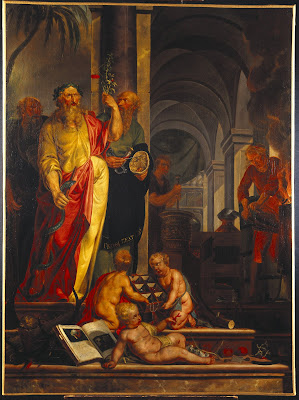 The other (above) is notable on several accounts. It is an eighteenth-century Dutch painting, which is a rarety in itself, since eighteenth-century paintings from the Netherlands are as rare in British collections as British portraits by artists of Dutch descent are common. This picture was painted, probably in Rotterdam, by the Prague-born painter Johannes Zacharias Simon Prey (1749-1822). It was found offered for sale, unframed and with no earlier provenance, in Antwerp by the dealer Rafael Valls who bought it there for the Wellcome Library.

The painting is an allegory, and like many allegories it is complex, but rewardingly so. There are three scenes, which are linked to each other. They start on the left, with the three people in ancient garb. They have the attributes of Apollo (the bow with which he, as the inventor of medicine, killed the Pythia), Aesculapius (his rod entwined by a single snake), and apparently hybrid features of Hippocrates, Galen and Celsus (a skull and syringe, and the Greek proverb “know thyself”, the catchphrase for anatomy). This venerable group represents Traditional Western Medicine as it was preserved in the writings attributed to Hippocrates and Galen, was rediscovered in the fifteenth and sixteenth centuries, and then formed the foundation of western academic medicine from the sixteenth to the end of the eighteenth century. 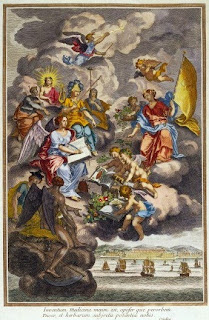 In the second scene, in the foreground (left), putti lay before these ancient sages a box of exotic riches and materia medica of the kind brought back from South Africa and the East Indies to Europe by the VOC (Vereenigde Oostindische Compagnie, or Dutch East-India Company), as well as imports from the colonies in Brazil: coral, elephant’s tusk, exotic minerals and plants, and precious stones. The subject is similar to the one shown in this 18th-century print (image right): the Dutch fleet is shown below, while above are the putti presenting its cargo of materia medica to Apollo, Mercury and tutelary pagan deities. The effect of these discoveries on natural history, medicine and pharmacy is brilliantly illuminated in Harold J. Cook’s award-winning book Matters of exchange: commerce, medicine, and science in the Dutch Golden Age (Yale 2007)

The third scene, on the right (image top), shows materia medica being turned into medicines in a chemical-pharmaceutical laboratory. On the left of this scene stands a man working a mortar and pestle. He looks out at the viewer, and his mortar is inscribed with the artist’s name “Is. Prey”: these are heavy hints that this is a self-portrait of Johannes Prey. The mortar bears the date 16 July 1791 (“17 – 7/16 – 91”), when Prey would have been aged 42 (click on image at top to enlarge). The laboratory scene shows “today”, i.e. the summer of 1791; it is depicted in grey, almost grisaille, contrasting in colour with the Rubensian splendour of the ancient Greeks on the left. 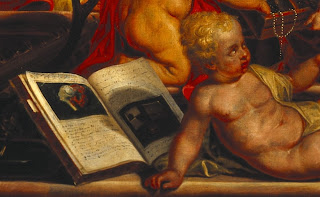 One of the items on the steps in the foreground is a book containing two colour illustrations. The one on the left shows the head of the femur and the one on the right shows black and white squares.  These have been identified by Dr Monique Kornell as two works by the printmaker Jan L’ Admiral which were published in books by well-known Dutch authors in the 1730s (i.e. nearly sixty years previously). 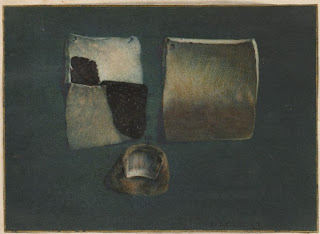 The black and white squares show the different skin colours of North Africans (“Ethiopians”): this is a plate to Bernhard Siegfried Albinus’s De sede et causa coloris aethiopum et caeterorum hominum (Leiden 1737), and it is the sole plate to that book. The two squares show skin from the breast of a black woman and the lower image shows a “nail removed from her thumb”, part of a discussion of the physical characteristics of racial types. The other illustration, showing the hip bone and top of the femur, was published in Frederik Ruysch’s Icon membranae vasculosae (Leiden 1738). Both are colour mezzotints made by L’ Admiral, the inventor of intaglio printing in colour, for two of the most illustrious scholars of the time in Holland, Albinus and Ruysch. The painter seems to have been remarkably well-informed about Dutch innovations in print-making techniques. He includes them as modern contributions to medical knowledge on a par with the discoveries in zoology and botany which the VOC had enabled through its arduous voyages of discovery. 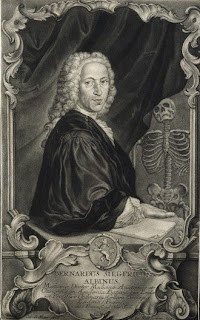 So on the left of the painting we have what Prey depicts as the glorious tradition of western medicine (obviously differing from Professor David Wootton‘s view of it as thoroughly inglorious). In the foreground we have the results of the Dutch trading empire which has brought into Europe new materia medica that enriches and transforms that ancient learning, together with the new medical and anatomical knowledge created by such moderns such as Albinus (image left), Ruysch and L’ Admiral. In the middle we have Prey recording this event in mid-July 1791. And on the right we have the drab world of “today” (1791 and after) in which the ingredients are transferred to a chemical laboratory and turned efficiently into medicines. The medicines are shown in jars on the back wall of the laboratory.

And as if that’s not matter enough, there’s the Rotterdam connection. And the significance of the marble steps on which the putti recline. And the patron or institution for which this painting might have been commissioned. And other points for which there is no time or space in this posting, and will have to await discussion elsewhere. The nuances are arguable, and there may be a significant source for the representation of the laboratory, but the above seems to give the gist of the work. The painting can now be seen in the Reading Room of the Wellcome Library if anyone wants to check any details for themselves. And if anyone has any other ideas about the interpretation of the picture, please add them as a Comment to this posting or send them to the Wellcome Library. 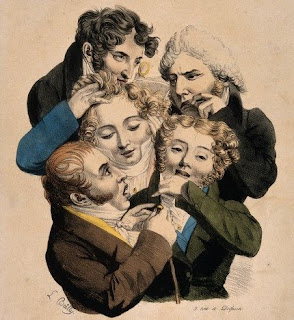 The date 1791 is literally at the centre of the painting and historically central to its significance: the midst of the French revolution in which so many old traditions were swept away in the intellectual world as much as in the political or architectural. Galen’s vocabulary was found wanting and was replaced by new coinages such as Bichat’s tissues; the work of Lavoisier on gases undermined the humours; and the Ancien Régime’s dominance of physicians over surgeons could no longer be taken for granted. The painting is a retrospect on a great intellectual and practical tradition at a turning point in its transformation into something recognizable to some extent today. 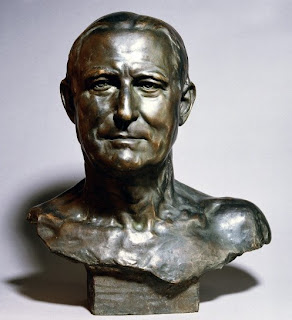 No new additions to the Henry Wellcome collection? On the contrary, to discover works like the above, keep watching those rolling web pages (also available as RSS feeds) which record them as they come in! In fact it would be something of a scandal had there really been no new additions, as Sir Henry Wellcome (right) directed in his will that his estate should be used “for the purchase and acquisition of books, manuscripts, documents, pictures, and other works of art and other objects and things for [his] Research Museums or Libraries”. The two paintings that have now been added to his collection and put on public display fulfil the terms of his bequest and would surely have delighted him.
Top and details: Oil painting by Johannes Zacharias Simon Prey, 16 July 1791. Wellcome Library no. 466059i
Apollo and the VOC fleet: Coloured engraving, 17–. Wellcome Library no. 93i
Black and white skin: Colour mezzotint to Dissertatio secunda de sede et caussa coloris Aethiopum et caeterorum hominum, Leiden 1737, Wellcome Library no. 5761091
Bernhard Siegfried Albinus: Mezzotint by J. J. Haid after C. de Moor. Wellcome Library no. 461i
Post-revolutionary doctors: Coloured lithograph by F-S. Delpech after Louis Boilly, 1823. Wellcome Library no. 16325i
Henry S. Wellcome: Bronze by G.F. Edgardo Simone, 1930. Wellcome Library no. 47277i