We mentioned in the last round up of new archives and manuscripts cataloguing that there is considerable overlap between May’s work and June’s: data released to the public in early June included a large amount of material created in May. Those collections were described in the May posting so we ask indulgence for any duplication in this month’s digest. 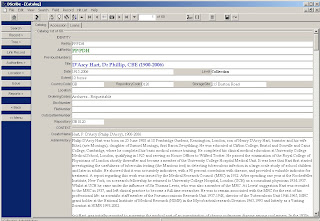 As mentioned in May’s posting, two collections catalogued during May by archive students on a placement at the Library from UCL were released in June following a little fine-tuning of the data and some work on rehousing the papers. The archive of Professor Emmanuel Ciprian Amoroso CBE, FRCP, FRS (1901-1982), veterinary embryologist and endocrinologist, includes personal papers, correspondence, academic writing, Royal Society material, Manatee research and information on the International Centre for Research on Manatees, papers on mariculture and the Cayman Turtle Farm, and documentation on the Trinidad and Tobago Medical Task Force. The overlap between animal and human biology is illustrated vividly by a set of photographs documenting lactation in various mammals, homo sapiens among them (PP/AMO/C/4/7). The collection as a whole can be seen under the reference PP/AMO.

The other collection catalogued by our archive students documented the long and productive life of Dr Philip D’Arcy Hart (1900-2006), specialist in tuberculosis, socialist and peace campaigner. It includes personal papers, material on University College Hospital, the Medical Research Council – where Hart was still working at the time of his 100th birthday – international visits, Societies, Committees and Fellowships, and so forth. Hart was initially recruited by the MRC to supervise an investigation of chronic pulmonary disease among coal miners. In the 1930s, mine workers who excavated the shafts and who developed silicosis were compensated: however those who worked at the coal face and who developed a range of lung diseases widely termed pneumoconiosis were not eligible for compensation. Between 1937-1948, as part of the Pneumoconiosis Research Unit, Hart travelled the valleys of South Wales with a portable x-ray van. The Unit’s work demonstrated that the disease was occupational, that industrial compensation for pneumoconiosis was warranted, and as a result compensation was subsequently extended. After what some would feel was a full career in the MRC Tuberculosis Unit, Hart embarked on a new career as a cell biologist, looking at the cellular interactions of tubercle bacilli within the defence macrophage cells, from 1965 until 2002. His papers may be seen in the catalogue under the reference PP/PDH.

We mentioned in a recent blog post that June saw something of a milestone in the retroconversion of our remaining hard copy archive catalogues: the papers of Sir Ernst Boris Chain (1906-1979), biochemist and Nobel Laureate for his work in the development of penicillin, were made visible in the database, at a stroke becoming one of the largest of our personal papers collections to be searchable. The papers can be seen under the reference PP/EBC. Also mentioned last month was the arrival in the first days of June of the papers of Henry McIlwain (1912-1992), biochemist and founding figure in neurochemistry, the majority of which was converted in May. The papers include biographical material, correspondence, material on lectures, visits, publications, and papers on his work with the Institute of Psychiatry. The 500+ new database entries can be found under the reference PP/MCI.

The last days of June, of course, fell into the Library’s closed week, during which – as has been reported recently – work took place to make producible various collections of papers received from the British Psychological Society. We hope to bring further information about this material in the next round-up of archives cataloguing, to appear in early August.

The image at the head of this blog post shows the cataloguers’ interface to the archives database, the collection-level record for the papers of Philip D’Arcy Hart on the screen.