July 31st 1910: one hundred years ago today, a small, balding, bespectacled man stands in handcuffs on a docked ocean liner, arrested on his arrival in Canada. The man is Hawley Harvey Crippen, and he is under arrest for the murder of his wife. His arrest is a landmark in that defining story of the twentieth century, the abolition of distance: during these years it became possible for news routinely to travel between continents faster than a person could carry it, and Crippen is one of the first people to be caught by the law as a result of this.

Crippen is notorious even now, a member of the same Rogues’ Gallery of public opinion as Jack the Ripper or Denis Nielsen. It can often come as a shock to people when they learn that, while he was undoubtedly convicted as a murderer, he had only one victim: he was no serial killer but someone whose crime was, if anything, a banal one. Tolstoy tells us, at the opening of Anna Karenina, that all happy families are alike but that unhappy ones are all unhappy in their own way. With all due respect to the Russian master, Crippen’s marriage was unhappy in all-too-hackneyed ways.

A native of Michigan born in 1862, Crippen had qualified as a homoeopathic doctor in 1884. After his wife’s death ended a short first marriage, he moved to New York to set up as a general practitioner, and it was here that he met Kunigunde Mackamotzki, the daughter of a Polish fruit stall owner, who had aspirations as a music hall singer and used the name Cora Turner. Crippen married her in 1892 and the couple lived initially in New York; however, when his practice failed in 1894 he took a job with Munyon’s Homoeopathic Remedies and three years later was sent by the firm to set up a London branch. Crippen remained in this rôle for only two years before Munyon’s fired him for spending his time managing his wife’s music hall career; however, he remained in London, moving from one shadowy quack establishment to another for the next ten years. 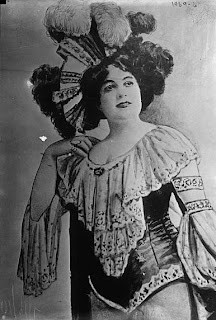 Behind closed doors, the Crippens’ marriage was coming off the rails. Mrs Crippen, now using the stage name Belle Elmore (in so far as her faltering stage career made it necessary at all), drank and was routinely unfaithful; in 1906 Crippen discovered her in bed with one of their lodgers. Their day-to-day existence followed a drearily familiar pattern: Belle vain, drunk and verbally abusive; Crippen, outwardly submissive, seething with resentment. Into this toxic situation had come a young typist called Ethel Le Neve, employed by Crippen when working at Drouet’s Institute for the Deaf. Crippen and Le Neve fell in love around 1903 but it was not until the lodger-in-the-bed incident three years later that Crippen crossed a barrier and consummated the relationship. Tensions must have risen inexorably during the following years: in 1908 Crippen moved to the Yale Tooth Specialists in Albion House, New Oxford Street, taking Ethel with him as a typist, whilst in the same building were the offices of the Music Hall Ladies’ Guild, a charity for which Belle did work as a way of maintaining her connections with the stage (a stage on which very few people would pay her to perform). Farcical encounters on the stairs must have ensued.

Matters came to a head in January 1910. On January 31st two friends of Belle’s dined with the Crippens. After this, no-one saw her again. Crippen gave out that she had gone to America for a few months and then, in March, that she had died there. Ethel moved into the Crippens’ house at Hilldrop Crescent, Islington. Outwardly, normality was resumed and Crippen continued to work as though nothing was amiss: the letter by him held in the Library’s Archives and Manuscripts collection as MS.8332 dates from early April, in the middle of this calm before the storm. 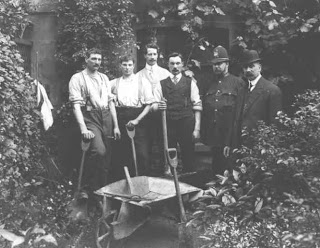 However, Belle’s music hall friends were unconvinced by Crippen’s account of her convenient death; their investigations revealed no trace of a Belle Elmore or Cora Crippen either crossing the Atlantic or dying in California as her husband had claimed. Scotland Yard were alerted and Detective-Inspector Walter Dew interviewed Crippen on 8th July. Crippen cracked: although he had told an outwardly plausible tale in the interview, of being deserted and lying to cover the humiliation this brought him, he was unable to keep up the pretence and bolted the next day. Alerted by his flight, the police searched the house and on July 13th, under the floor of the kitchen coal cellar, found a dismembered female body. The corpse contained a poison Crippen had bought shortly before Belle’s disappearance.

Crippen and Ethel had fled together to Belgium and on 20th July sailed on the Montrose from Antwerp, bound for Montreal. Crippen used the name John Philo Robinson and Le Neve, in boy’s clothes, was posing as his sixteen-year-old son. Captain Kendall of the Montrose, however, was suspicious that Robinson and his son were a little too lovey-dovey in their behaviour for father and son. Crippen’s disappearance, and the murder, had been widely reported: readers with a Wellcome Library card will be able to see how the Times reported the flight and the body’s discovery on Friday July 15th here. The captain made the correct guess as to the couple’s identity and, in a first for crime prevention, sent a message back to the ship’s owners, the Canadian Pacific Railway Company, by telegraph. The owners informed Scotland Yard, which dispatched Detective-Inspector Dew in pursuit on the faster liner Laurentic; they also informed the press, which from July 25th onwards was able to report on the slow-motion chase as the two ships ploughed across the Atlantic. On the 30th the vessel arrived off Quebec and police disguised as river pilots rowed out to her; Dew looked at the couple, confirmed the identification, made the signal and the arrest was made. The Times correspondent reports that “Crippen turned the colour of death, and his voice gurgled some unintelligible sound as he was hurried below. Miss Le Neve became hysterical and fainted.” The escape had failed. 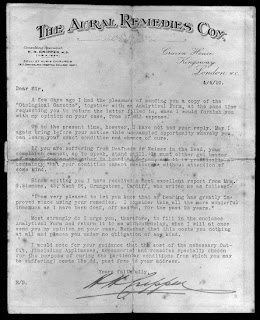 Crippen was returned to London and tried for murder; his defence was unconvincing (the human remains must already have been under the floor when he bought the house). The pathologist Bernard Spilsbury, in one of his first notable cases, demonstrated that a scar on the corpse matched one on Cora Crippen. (Nonetheless, in fairness one should note that there have been attempts to prove that the conviction was unsafe: see here.) Crippen was hanged on November 23rd, but succeeded in minimising damage to Ethel Le Neve; she was acquitted at her trial of acting as an accessory to murder after the fact, and lived until 1967.

Why do we remember Crippen to this day, when the facts of this crime are so banal, and other widely reported crimes of the time are forgotten? The “Battersea Flat Murder”, the shooting of the actor Thomas Weldon Anderson (stage name, Atherstone) which was reported in the same issues of the Times as the chase for Crippen, has sunk into oblivion. Bernard Spilsbury did not think the Crippen case sufficiently interesting for him to keep any note of it in his set of index cards documenting noteworthy cases (held in the Wellcome Library archives collection as PP/SPI), yet Crippen has a notoriety out of all proportion to the dingy facts of the case. In part, perhaps, it is the fascination with doctors that kill, the transgression involved when those whose vocation is health turn to murder. (The calculating use of medical skill to dismember a body, the element of cold self-control in the killing rather than a simple upwelling of violent passion, often especially outrages us.) Crippen, of course, was essentially a quack – it is notable that the Times often uses inverted commas, the typographical equivalent of tweezers, around his title “Dr.” – so there is also something a little sleazy about him, the disreputable truth behind the respectable façade. That meeting of the respectable and the furtive is, of course, true of Crippen’s appearance as well: contemporaries exclaimed at the idea that this unassuming polite little man could have been capable of killing. But in the end, Crippen was just in the wrong place at the wrong time: unlucky enough first of all to have the press, for the reasons set out above, pick up the story and run with it (Wellcome Library card holders can follow the whole story in the Times Digital Archive), but most of all to be on the receiving end of a technological breakthrough, and to be the first person arrested as a result of a telegraph message from a ship summoning a faster liner. Technology caught Crippen; had he been accused of the crime ten years earlier and fled in the same way, he might have got away scot-free. Today, of course, technology in the shape of this blog perpetuates his notoriety. Would he have preferred Anderson’s oblivion to his own posthumous fame? We can ask, but the grave within the walls of Pentonville Prison will never answer.

Images, from top:
1/ Crippen and Le Neve in the dock at the Old Bailey, from Wellcome Images
2/ Belle Elmore, an image originally from the Library of Congress, from Wikimedia Commons
3/ Police excavating the garden of Crippen’s house (Detective-Inspector Dew on the extreme right), from Wikimedia Commons
4/ Letter from Crippen to a client, dating from the period between Belle Elmore’s death and Crippen’s flight, held in the Wellcome Library’s Archives and Manuscripts collection as MS.8332.