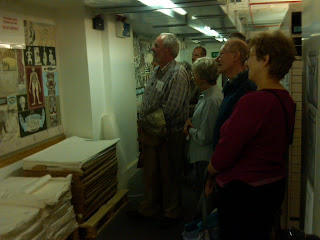 A group of thirty visitors from The Twentieth Century Society visited the Wellcome Library today to see the subterranean murals painted by Stewart Helm in 1992. The six bays of paintings were painted in a room which was then the staff dining room, and they will be familiar to those who enjoyed the Christmas dinners of the Friends of the Wellcome Institute in that room in the 1990s. The room is now divided into two areas used for Wellcome Library storage. Most of the murals have been preserved, though two were curtailed by building works when a new air-conditioning system was put in in 2006. 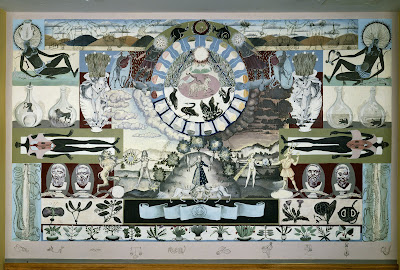 The murals, painted in egg tempera, show motifs from Henry S. Wellcome’s travels, collecting activities, and archaeological projects. Like Wellcome’s collection, they combine elements from all cultures, periods and disciplines, ranging from ancient Greek and Egyptian pottery to Christian mysticism and the myths of the Gispudwada clan of the Tsimshian –- all composed symmetrically in a complex arrangement of panels.

The murals are not normally accessible to the public, but they may be seen by appointment with the Wellcome Library, from which an illustrated leaflet about the murals is available free of charge.

The Twentieth Century Society’s “Murals Walk” started at the National Gallery to see the Cayley Robinson paintings on loan from the Wellcome Library, and then worked its way through several buildings in the West End. After the Wellcome Library visit, it moved on to our neighbour University College London to see paintings by Henry Tonks (1926) and Rex Whistler (1934), followed by a bus ride to Regent’s Park and a viewing of murals by Ivon Hitchens (1954) at Cecil Sharp House, the headquarters of the English Folk Dance and Song Society. Details of further activities are on the Events page of the Twentieth Century Society’s website.