Pills, spills and the peloton 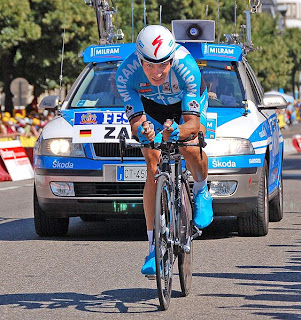 At regular intervals later this afternoon, 189 young men will launch themselves and their bicycle down a ramp on Rotterdam’s Zuidplein, turn north and explode along the Dordstelaan towards the huge sweep of the Erasmus Bridge, legs pumping and lungs burning as they struggle to keep up speed climbing the bridge into the wind. Their course will take them round a city-centre loop of 8.9km, recrossing the Maas river and heading south again, whilst on the other side of a barrier riders who set off after them flash past northbound. Some ten minutes after they went down the ramp they will cross a finish line a few hundred yards from the start, stopping the clock; their average speed for this lung-bursting short sprint may approach 55 km/h. With this traditional time-trial prologue begins the 2010 Tour de France, which tomorrow will set off southwards towards Brussels and eventually, having circled France for what is now the 97th time, reach Paris on July 25th.

The links between the Wellcome Library and le Grand Boucle, as the French call the Tour (“the big belt”, or, less figuratively, “the big circuit”) may not seem obvious – but a moment’s thought reveals the links between cycling and medical science. The professional cyclist’s life is a constant quest for an edge over his or her opponents and this includes minute analysis of how the body functions, from microscopic scrutiny of the mechanics of pedalling action, to detailed analysis of nutrition and breathing in the quest for maximum cardio-vascular efficiency and endurance. And this is to confine ourselves to the search for a legal edge: the relationship between cycling and chemical assistance is a long-standing and murky one, spanning stimulants legal and illegal, from sparkling wine to the notorious “Belgian mix” (caffeine, heroin, morphine, cocaine, amphetamines, and anything else one dares to stir into the pot). It takes us on into the modern high-tech cheating of EPO blood-doping and human growth hormone. Mercifully, the Library’s holdings on cycling are not all quite so depressing and take us also into the clean fresh air of Edwardian outdoor pursuits – though even here, the shadow of performance-enhancing substances can be seen… 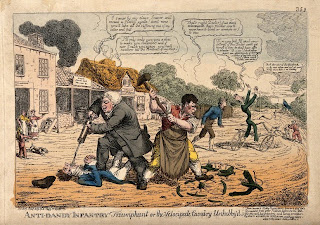 The bicycle has its origins in the Regency period, in which there was a craze for the “hobby-horse” – shaped like a modern bicycle, but propelled by pushing one’s feet against the ground. A print in the Library’s Iconographic Collections satirises the new-fangled machine, showing a dandy forced off his hobby-horse and subjected to brutal punishment by the two professions most threatened by the new technology: a blacksmith and a vet.

Of course, the nineteenth century did not see horses made obsolete by bicycles; it was not until the closing years of the century that developments in design (pedals, the chain drive, the free-wheel and calliper brakes) gave the bicycle both speed and control. The golden age of cycling, maybe, is the twenty years either side of 1900, when the design of the machine is mature and this now-cutting-edge technology is being used on roads still relatively free of traffic. The first Tour de France took place in 1903, won by Maurice Garin. Photographs show him riding a machine that looks not dissimilar to today’s (although without gears, which made hill-climbs brutal affairs). 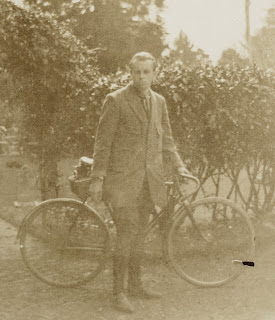 A similar machine can be seen in a photograph in the Wellcome Library, in the papers of Lionel de Barri Crawshay (MSS.1905-1912). Crawshay lived at Sevenoaks, Kent, and came from a family whose money was made in Welsh coal mines and iron foundries; however, his own interests lay in natural history, particularly botany. A series of notebooks in the Wellcome Library record his observations in botany and osteology. Of especial interest to us today, however, is his bicycling log-book, MS.1912. He learned to ride in 1900, staying with Mr Allingham at Ballyshannon, Ireland – “the learning was upon a ladies Rudge-Whitworth, belonging to the eldest Miss Allingham.” His log-book dates from some 10 years later but in it he tells the story of how he learned – and notes with perhaps some satisfaction that “My brother took lessons at the same time on a machine belonging to another Miss Allingham, but did not continue.” Looking back over some years, he carefully records his progress as a learner, his first ride alone, his first accident (“collision with Miss Allingham, both fall, no damages”), his second accident (“lost control down a hill, run into hedge, cuts and scratches”) and his growing confidence at covering greater and greater distances. 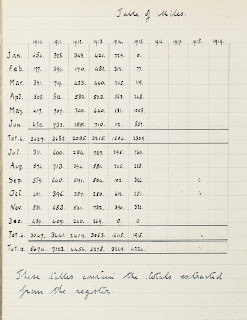 It is clear that he is hooked and by 1910, when he compiled this log, he was recording every mile cycled and giving monthly breakdowns, comparing this to the previous year’s total, and so forth. One hundred years ago, for instance, in July 1910, he logged 311 miles; the following July’s total, in 1911, was to be even more impressive, a round 600 miles. No mile is pedalled without being recorded, a dedication that would doubtless today see him clocking miles for the London Cycle Challenge or similar scheme. Elsewhere in his log, we read of runs through the Kent countryside to Bromley, Seal, Otford and Green Street, or further afield to the coast at Hythe – country through which the Tour de France passed, rather more quickly, in 2007. Works on his bicycle – new tyres and brakes – are lovingly recorded. Sadly, 1915 is the last year for which he records any mileage – the following year saw him in the Army and in May 1917 he was killed when his troopship was torpedoed in the Mediterranean.

In the immediate post-war years we meet another cyclist – Edgar Ferdinand Cyriax (1874-1955), a practitioner and populariser of Swedish remedial gymnastics (his father-in-law, Jonas Kellgren, was the founder of the discipline). Amongst his copious papers, held as MSS.2001-2025 and 6054-6060, we find a little notebook (MS.2007) with the title “B[lood] P[ressure] and Pulse during moderate cycling”. In this Cyriax records not merely bicycle rides but their physiological effects. On July 13th 1919, for instance, he notes that he “went all over the place, and came to Willesden Green and Cricklewood and Acton” – the venue for his rides is less rural than Crawshay’s, although he still notes that he was able to buy cherries en route. Blood pressure and pulse readings are carefully taken at intervals throughout the ride: a procedure that today’s Tour riders would find familiar. 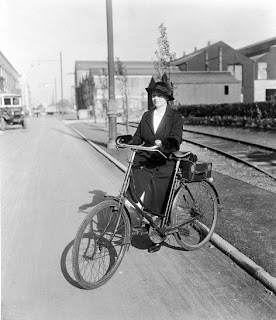 The bicycle has not just been used for sport or recreation, of course. As a flexible piece of simple technology it has given mobility to millions and enabled all sorts of social and economic developments. A photograph from the papers of the National Birthday Trust Fund (SA/NBT), probably taken in the late 1930s, illustrates this: a midwife stands beside a solid, sensible machine that will carry her and her equipment to where it is needed. On the back rack is a case that contains a portable gas-and-air analgesic apparatus: when this year’s Tour passes through the Pyrenees, the riders who are not specialist climbers would doubtless give a good deal for a machine carrying such apparatus to pull alongside them on the Col du Tourmalet. 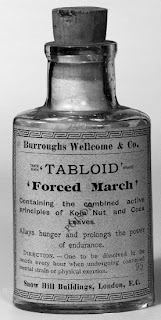 Some may call on other assistance, of course (allegedly). This too is nothing new. Henry Wellcome himself, at the turn of the century, was marketing a product named “Tabloid Forced March”, which increased endurance in sustained physical exercise and contained “the combined active principles of Kola Nut and Coca Leaves”. The label states that it “Allays hunger and prolongs the power of endurance” – it would also fail you in any drugs test you cared to take. Similar substances may well be involved in professional cycling now – we could not possibly comment – but let us finish instead on a more inspiring note, symbolic of the way the bicycle endures as cheap, basic technology surmounting all obstacles. During the London Blitz, Burroughs Wellcome’s headquarters building on Snow Hill was completely destroyed by enemy action. A photograph in the collection, however, showing the devastated ruin, also shows in the right-hand corner a determined cyclist, heading along Holborn Viaduct into the City at sufficient speed to be slightly blurred. Whoever this unknown cyclist was, still clocking up the miles despite the Luftwaffe, we salute him. 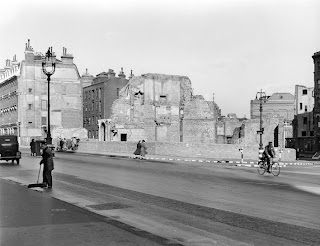