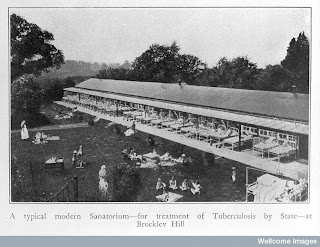 Tuberculosis remains a global killer, but it is often supposed to be a disease of only historical interest within the UK in the present. However, it was recently reported, Experts urge TB vaccine for all London children, that the incidence of childhood infections with tuberculosis in London has now passed the level at which routine immunisation should be introduced, according to public health experts. Even in the mid-1980s, when figures were at an all-time low, numbers of cases were in the thousands. 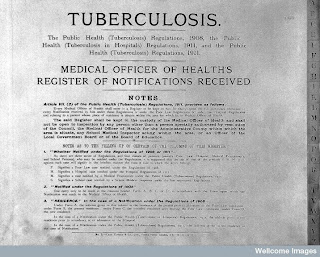 The extent to which this illness was a major cause of concern for centuries is reflected in Archives and Manuscripts in the Wellcome Library, and a new resources guide, Tuberculosis, draws attention to our substantial holdings. Recipe books from the seventeenth century (now digitised and available online) reveal numerous remedies for consumption (pulmonary TB) and ‘The King’s Evil’ – scrofula, tuberculosis of the lymph nodes in the neck, historically largely caused by drinking milk from infected cows.

Moving forward in time, archives and manuscripts from the nineteenth century onwards delineate changing clinical understandings of tuberculosis in its numerous forms and the rise of public health education and awareness initiatives, including mass radiography and BCG vaccination, as well as the development of effective treatment with the rise of antibiotics.

The collections also contain a few personal accounts by sufferers, including a consultation in Paris, 1723 by the 1st Viscount Palmerston for his pain in the chest and spitting of blood (MS.4764), Mrs Phyllis Tarn’s letters to her husband, while convalescing from TB in 1922 at the Royal National Hospital for Consumption and Diseases of the Chest, Ventnor, Isle of Wight (MS.8211), Captain Andrew Haggards’s diary detailing his experiences suffering from tuberculosis of the scrotum, 1950-3 (MS.7885), and an oral history interview with a doctor whose medical training was interrupted by having to spend time in a sanatorium for TB (GP/58/2).

Information on the whereabouts of historical records of TB hospitals and sanatoria can be found in the Wellcome/National Archives Hospital Records Database.