The ‘Medical Directory’ and the Zeitgeist

One of the advantages of the Wellcome Library’s annual summer Closed Week is that, in the course of putting a lot of things right which had become not quite right, the staff get the opportunity to work with documents for which they have no responsibility for the remaining 51 weeks of the year. Last week it fell to me to get the the British Medical Directory back into shape. The Wellcome Library’s run goes back to its first publication in 1870, and the volumes are all still on the open shelves for easy consultation, not in closed stores.

What could have been a tedious task was relieved by the changing format of the publication. Until 1967 the two volumes were split between A-L and M-Z. But in that year of existential liberation 1968, the alphabetical sequence was split between A-Mac and MAD-Z, even though the pagination didn’t require it. It seems as if the editorial staff thought there would be mnemonic value if volume 1 ended with clans of Scots and volume 2 began with MAD. This division continued until 1992 when they had to split the annual volumes into three instead of two volumes. Publication reverted to two volumes in 1998, after which normality returned and the volumes were once again split into A-L and M-Z. 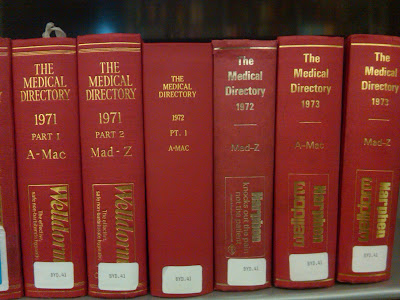 Up to and throughout the 1950s the spines were always lettered in serifed type, as befits a publication which defines a professional establishment. The economy was growing: why rock the boat? But in the 1960s the establishment was buffeted by satire and the Beatles, and the wind of change affected even the typography of the Medical Directory: in 1972 the old typeface followed the fate of pounds shillings and pence, and a sansserif face was introduced (above). Paradoxically, the Wellcome Library has since rebound the first volume of 1972 with serifed lettering. 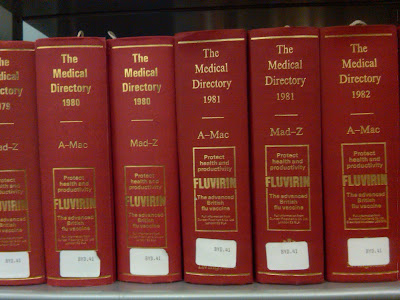 By 1978 casualness had gone too far. Inflation was destroying the currency. A return to selected traditional values was called for by Mrs Thatcher: in 1981 the Medical Directory brought back the serifs.

By 1997 the call for “Back to basics” had petered out. New Labour took the country through to the Millennium celebrations. Breaking with protocol, the Prime Minister and his wife crossed arms with H.M. the Queen to sing Auld Lang Syne in the Millennium Dome. And in the same year 2000, to mark the reign of “Cool Britannia”, the Medical Directory … yes, you’ve guessed it … 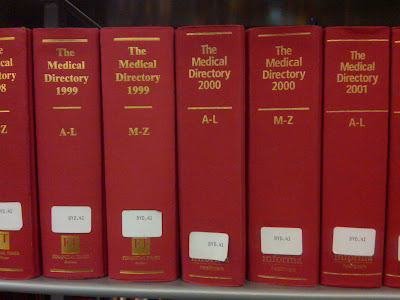 There has been one change since then: from 2002, the publishers started to tell us that A-L was vol. 1 and M-Z was vol. 2. Previously people had had to work that out for themselves. Was it changed for the benefit of computers? or had weary packers previously been shipping two identical volumes in place of the complete set by mistake?

Can we foretell the typography of the Medical Directory by analysing the policies of the present Conservative/Liberal Democrat coalition? If so, we might predict that, to save money, the information in the volumes will become available in electronic form only, in the typeface of your choice – just like this blog. Then the Hegelian dialectic of typefaces would be resolved, and the British Medical Directory would continue to verify Hegel’s assertion of a Volksgeist or national Spirit that “imparts its common stamp to [a nation’s] religion, its political constitution, its social ethics, its legal system, its customs, but also to its science, its art and its technical skills”. [1]

Health of the People — British style