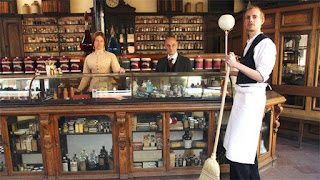 Doing what it says on the (medical) tin, the series aims to reconstruct life in a 19th century pharmacy. Each week historian Ruth Goodman, Professor Nick Barber and PhD student Tom Quick will seek to re-enter the world of medicine in the 1800s.

In the first episode, the team got to grips with leeches and scarifiers, tried to use a bronchial kettle to cure coughs and discovered the medical origins of Indian tonic water and Worcester Sauce.

The next three weeks promise more medical history reconstructions and readers are encouraged to tune in: not only to learn more about how our great-great-grandparents sought to cure their ills, but to keep an eye out for images from the Wellcome Library’s collections which will appear in the series.

All four episodes will be available to watch for seven days in the UK through the BBC iPlayer.