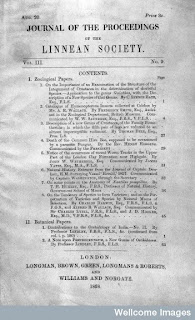 It could be argued that the 20th August is one of the most important days in the history of scientific publication. As it was on this day in 1858, that Volume III Number 9 of the Journal of the Proceedings of the Linnean Society was published.

Why the importance? Click on the image to the left and the last of the Zoological Papers listed may ring some bells.

The importance of this paper was not immediately clear at the time, with Thomas Bell, the President of the Linnean Society commenting in 1859 (now infamously): “The year which has passed has not, indeed, been marked by any of those striking discoveries which at once revolutionize, so to speak, the department of science on which they bear”.

Given the developments which arose from the paper, we may laugh at Bell’s comment now. But are we confident enough to think that we would have noted the importance of this paper if we would have read it on this day in 1858?