A hot night in Bengal 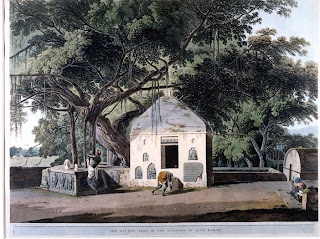 One hundred and seventy years ago, on the 1st of August 1840, a court-martial convened in the East India Company military base of Dinapore (now Dānāpur, in India’s Bihār state).

Dinapore was a staging post on the route up the Ganges plain inland from Calcutta towards Delhi, and an important garrison supporting East India Company rule in the sub-continent: it was the largest military cantonment in Bengal. Within it there would always have been based a large population of European soldiers doing their best to cope with an unfamiliar culture and an unfamiliar climate. (By the start of August, Dinapore would have been well into the monsoon season, with an average temperature of close to 30°C and weather dominated by massive convection thunderstorms.) Historically, the British response to culture shock and to hot weather has often revolved around downing large amounts of alcohol, and a manuscript in the Library’s collections (MS.2127) details the results of one such incident. 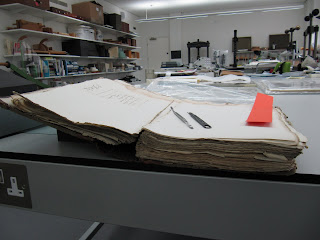 The manuscript, currently undergoing conservation work, consists of a large volume into which an unknown clerk has bound numerous letters and administrative documents generated at the base in the period 1840-1841: material relating to stores and supplies sitting alongside accounts of courts-martial and other important hearings. On August 1st 1840, a court-martial was assembled to hear accounts of an incident not long after dawn that morning – although for at least one of the participants this had clearly been not the start of the day, but the end of a long night.

An Assistant-Surgeon looking after the artillerymen at the base, a Mr Barber, takes up the story, relating that “this morning between the hours of 6 and 7 Oclock whilst I was examining the eyes of a Patient in the Artillery Hospital”, Gunner Shehan – who was one of two sentries guarding a patient, Gunner Hasterley, for reasons not set out in this account – left his post and came over to Barber “in an insolent way” and demanded why he, Shehan, had not been allowed entrance to the hospital to visit his wife, who was a patient there at the time. One possible reason for his not being admitted occurs in Barber’s next sentence, in which he notes that “Perceiving that the Man was Drunk, I desired him to go away, and not interrupt me”. 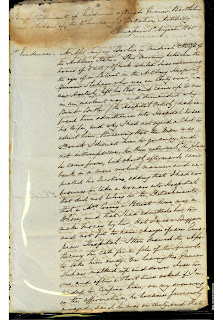 Whether Shehan is drunk from the night before, or has made an early start on drinking this morning, the diagnosis is convincing. Barber’s rebuff sends him away for a little while but soon he is back:

shortly afterwards [he] came back in a more violent manner and repeated his Questions, adding that I had no business to take a woman into Hospital that did not belong to the Detachment, that a Mrs Coveny a Patient there, was a Whore, and that I had admitted her, to make money by her, that I was a Buggar, and not fit to have charge of an European Hospital…

You can almost smell the alcoholic breath and feel the spray of spittle as the rant continues. Barber has had enough, but his next intervention does nothing to calm the scene:

I then desired the Apothecary to call for a file of the Guard to take him away. On hearing this Gunner Shehan walked up and down close to me, and after a short time asked if I intended to confine him; on my answering in the affirmative, he became furiously enraged, said he was on duty, and that I had no right even to speak to him, and that he would run his Bayonet through my bloody Guts; he immediately drew it out, and advanced towards me with the wilfull intention of carrying his threat into execution.

Barber calls out to Gunner Dunn, the other sentry guarding the mysterious Gunner Hasterly, and a struggle follows:

he sheathed his Bayonet, but again and again threatened to stab me, and put his hand on his Bayonet to draw it out again. Seeing him struggle with Gunner Dunn, I went into the Ward and procured a Stick for my own defence, being in momentarily expectation that he would succeed; Soon after a Guard of Sepoys [native Indian soldiers] came up, and he was with difficulty taken away, continuing however the whole time to abuse me.

We may be in up-country Bengal in the mid nineteenth century, but scenes like this play out in taxi queues and pedestrian precincts across Britain every weekend. Gunner Shehan is unusual, mind you, in being so drunk so early in the day. His defence is not included in this documentation so we do not know if he had the presence of mind to blame the monsoon weather for upsetting his European bodily rhythms. Nor do we know his fate, although drunkenness on duty and threatening an officer would normally be treated with considerable severity. 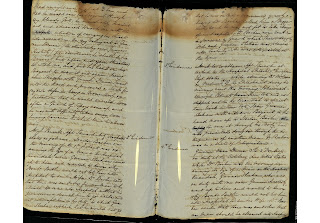 The conditions of India certainly seem to have had an impact on the volume itself: the pages are stained by damp at the top of the volume, which has led to mould-growth at some stage in the past. The entire volume is fragile, with easily fraying edges to the pages and traces of insects nibbling the paper. The images attached to this blog post give an idea of its current condition. At present the volume is undergoing work by our Conservation department and is not available for consultation, except by appointment with the conservators, whilst that takes place. In a painstaking process, the volume will be disbound, its individual pages cleaned and freed of the traces of mould and then placed in clear sleeves, and those pages then sorted into a more comprehensible order (the unknown clerk who compiled it seems simply to have stuffed a year’s worth of letters into the binder without regard to their order). When this is all done, readers will have the chance to explore more British interactions with the Indian Subcontinent. One hopes – vivid though this little window on the Raj is – that they will be more elevating scenes than the one just laid before us.

Images: top, a Hindu shrine in Bihar province, from the Wellcome Library’s Iconographic collections (catalogue record here). The remainder of the images are of MS.2127, including one taken in the Library’s Conservation studio as work begins upon it.

One Response to A hot night in Bengal