Confrontation at Crystal Palace: The Adventure of the Bearded Colossus

One hundred and ten years ago, two doctors confronted one another in South London. One, in his fifties at the time, was the acknowledged leader in his field. The other, ten years younger, was a few years into a stellar career in a different area. In Upper Norwood’s Crystal Palace Park, a few yards from Benjamin Waterhouse Hawkins’ dinosaur sculptures, in a bowl of land that now houses the famous Crystal Palace athletics track, the two men met head on… 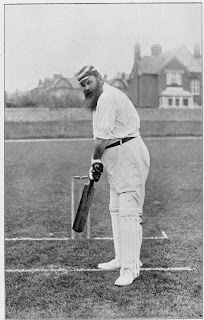 Their meeting – as the mysterious opening paragraph probably indicates – was not to do with any medical issue, and although both are instantly recognisable to this day, in neither case is it for their medical career. The older man is William Gilbert (“W.G.”) Grace, the brilliant cricketer (and general practitioner). The younger is Arthur Conan Doyle, author, general practitioner and one-time eye specialist.

Born in 1848, Grace had starred for Gloucestershire since he was a teenager, chiefly as a batsman but also as a bowler (initially medium-paced, but growing slower as his waistline increased with the years). In 1895, well into his forties, he had had a great “Indian Summer” season, compiling statistics that ranked with any season of his career – for example, he became the first player to score 1000 runs in May, something only two other people have achieved subsequently. In 1899, however, he quarrelled with the authorities at Gloucestershire and became the lynchpin of a new London County Cricket Club, based at Crystal Palace Park. Although he never had another truly great season, even in the twilight of his career he was a feared player: Grace in decline was as good as many players at their best. 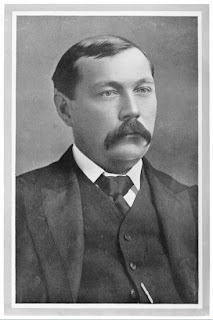 Arthur Conan Doyle, by contrast, loved cricket but performed at a much lower level. At this stage in his career, he had already achieved huge success as the creator of Sherlock Holmes. The great detective had made his debut in two novels in the late 1880s but it was when Doyle began to write a series of short stories featuring Holmes for the Strand magazine, the first appearing in summer 1891, that public enthusiasm really went through the roof. The Strand rapidly made the Sherlock Holmes story its lead item, and circulation doubled. Notoriously, Doyle felt Sherlock Holmes was crowding out all his other literary projects and in December 1893 sent him and his arch-rival Professor Moriarty tumbling, apparently to their deaths, into the Reichenbach Falls; the remainder of the 1890s were spent in a variety of literary endeavours, including other mystery stories, historical fiction and tales on medical themes. When the two men met in 1900, in South Africa the Boer War was under way – something to which Doyle gave enthusiastic support – and he had just revived his medical skills to serve as a volunteer doctor at the Longman Hospital in Bloemfontein. In the late summer, he was back in England and back in the area of South London where he had lived with his wife and daughter earlier in his career (there is a blue plaque on Conan Doyle’s old house in Tenison Road, South Norwood, a mile or so to the south of the Park), on a collision course with W.G. Grace.

Doyle was a member of the Marylebone Cricket Club, and on 23rd-25th August 1900 the MCC took on Grace’s London club in a three-day game at the 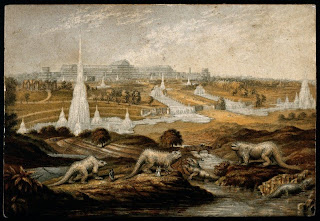 Crystal Palace. It will not surprise anyone familiar with the English summer to learn that the match was affected by rain – there was no play at all on the first day – and that the two clubs needed to negotiate ways in which the fixture could be brought to a conclusion despite time lost to the weather. Grace agreed to a proposal to extend the final day’s play into the evening to get a result. On the 25th of August, the LCC – who had batted first – were into their second innings. Neither side had scored heavily in the first innings and each had been all out for a very similar figure, so this final day would decide the game. No London batsman was particularly impressive, with the exception of Grace: he scored a century, with his nearest colleague scoring only 36 and all the others struggling to break double figures. Getting Grace out would be crucial for the MCC.

Conan Doyle, a slow-to-medium paced bowler for the MCC, had had a quiet game: taking no wickets in the first innings, and scoring only 4. Now, on the final day, he found himself wheeled in to bowl again. The two main MCC bowlers, Thompson and Cranfield, had taken all the wickets so far. Doyle later recalled the occasion in a long poem, “A Reminiscence of Cricket”:

“Before me he stands like a vision,
Bearded and burly and brown,
A smile of good humoured derision
As he waits for the first to come down…

And I – I had tricks for the rabbits,
The feeble of mind or eye,
I could see all the duffer’s bad habits
And where his ruin might lie.

The capture of such might elate one,
But it seemed like one horrible jest
That I should serve tosh to the great one,
Who had broken the hearts of the best.”

And yet: Doyle’s very lack of threat as a bowler, his sheer amateurishness, may have served him well in the end. As he tells it, he sent down two deliveries that Grace treated with perhaps more respect than they deserved, killing them with the bat but not attempting to hit them beyond the crease. Then, on Doyle’s third delivery, when Grace had finally decided that there was no secret weapon and that Doyle was every bit as unpolished as he looked, the great man uncoiled a ferocious shot, and…

Still when my dreams are night-marish,
I picture that terrible smite,
It was meant for a neighboring parish,
Or any place out of sight. 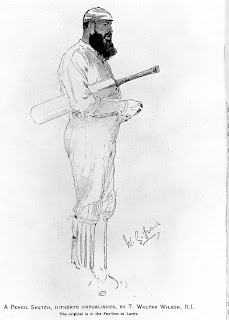 But indeed: Grace’s bat swung a fraction too low and the ball, instead of sailing over the trees and landing in Penge, rocketed up vertically and dropped… safely into the gloves of the wicket-keeper.

The London club promptly declared and sent the MCC in to bat for their second innings. As mentioned above, the day’s play was extended to ensure that a result could be reached and, ten minutes after the game had been scheduled to end, the MCC reached their target and secured the victory. Doyle batted in the second innings but was out for a duck; however, his work was done. It was to be the only first-class wicket he ever took, but after W.G. Grace – even in his twilight years – anyone else would have been an anti-climax.

We remember neither man for his medical career: although Grace put in many years of general practice and Poor Law work in working-class areas of Bristol, he was no high-flyer, and Sherlock Holmes claimed Doyle before his medical career really gained any momentum. It is clear that if he had stuck to cricket we would not remember Doyle for that either. But the beauty of a sport wedded to statistics is that his feat – which clearly gave him enormous pleasure – is part of the official records to this day. Cricket fans wanting to see the full scorecard can do so here. And the Wellcome Library recognises both medical high-flyers and those whose main interests lay elsewhere: biographies of both Grace and Doyle can be found in the book collection, whilst Wellcome Images provides several illustrations of both men; there are also small collections of papers relating to both in the Archives and Manuscripts holdings. The main focus of their lives does lie outside medicine, but nonetheless the medical world can claim each as one of ours.

Images, from the top (all from Wellcome Images):
1/ W.G. Grace in middle age.
2/ Arthur Conan Doyle, undated.
3/ Crystal Palace Park, shortly after its opening in the mid-19th century. The cricket ground took over the area occupied by the large fountain to the left of the picture, beyond the dinosaurs.
4/ W.G. Grace in his prime.